Found this in an article dated 2016. Not sure if this has been posted before. 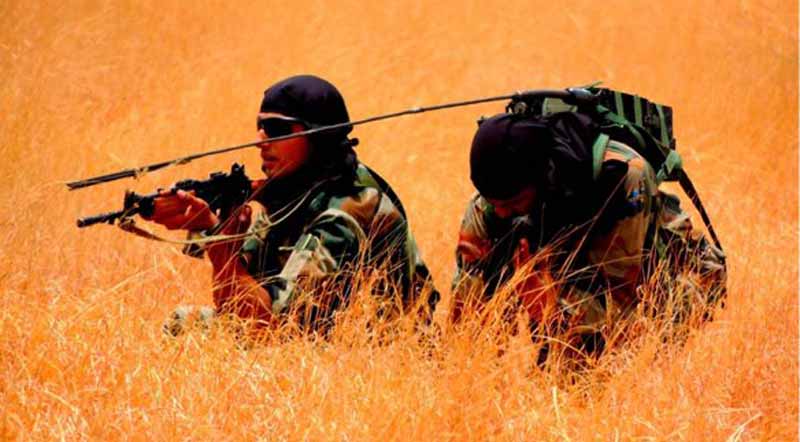 Sourajit Dutta said:
Found this in an article dated 2016. Not sure if this has been posted before.

Exercise conducted by Strike 1. Not sure if SF or Inf!

Used sometimes in training....seen with MARCOS as well.
R

AVINASH4061 said:
More than 80% guys are marksman with the assualt rifles. I don't know if the term ' Marksman' had some different connotation. My bad.
Click to expand...

80% proficiency I assume means accuracy or is it a calculation which includes speed? Also is this an IA standard or SF standard ?

Also what I meant to ask was that 80% etc maybe set minimum standard on paper, but at the internal squad level do you prescribe unofficial standards of your own? I.e do you have a different minimum expectation of the men under your command? Failing which consistently perse they are RTU'd?

Sourajit Dutta said:
Found this in an article dated 2016. Not sure if this has been posted before.

Look at that fucking radio. 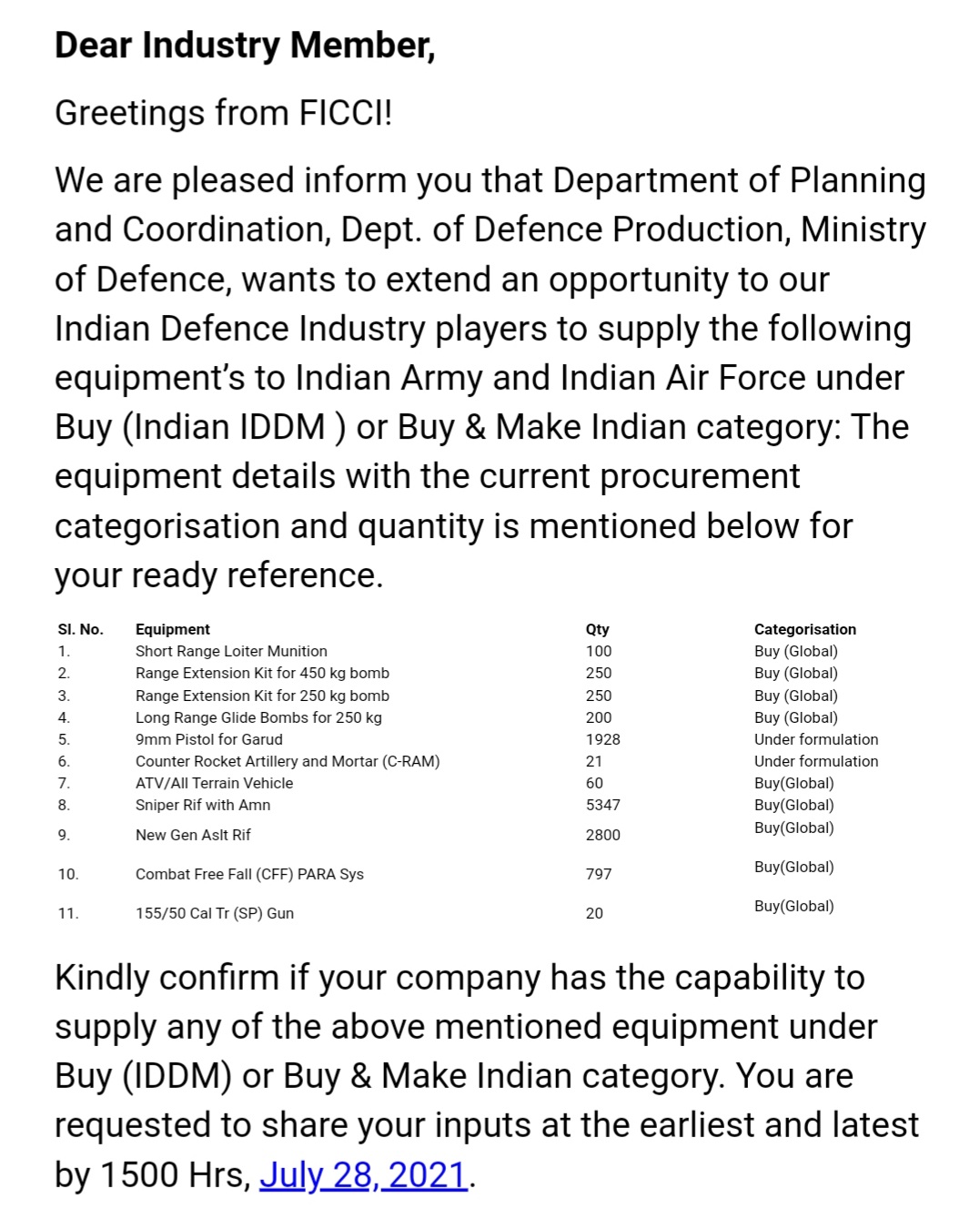 Yup.but the ammo is wrong maybe typing error but it says news 9mm pistols for garuds and next generation assault rifle what does that mean?

In India new gen does not mean NGSW but anything better than INSAS, they also called AK-203 as world’s best assault rifles lmao.

Marliii said:
Yup.but the ammo is wrong maybe typing error but it says news 9mm pistols for garuds and next generation assault rifle what does that mean?
Click to expand...

Aslt rif quantity is 2800, most likely for AFSOD their size is similar. Earlier 2400 FN SCAR-L&H were for Para SF not AFSOD.

And why the F they didn’t mention NVDs

FalconSlayers said:
In India new gen does not mean NGSW but anything better than INSAS, they also called AK-203 as world’s best assault rifles lmao.
Click to expand...

Maybe for SF? Only 2800 are being bought and army had earlier attempted to 2400 scar l.and h.what is ficci doing in this?

Marliii said:
Maybe for SF? Only 2800 are being bought and army had earlier attempted to 2400 scar l.and h.what is ficci doing in this?
Click to expand...

Most likely fake made for internet sensation.

FalconSlayers said:
Most likely fake made for internet sensation.
Click to expand...

If its fake then that is one hell of problem that guy is in.its genuine according to me

Apologies for OT comments but some members need to get their shit together here, it's okay if you want to bitch about problems and I don't deny that there are issues which need to be sorted but when you start conflating and outright misinterpreting situations and realities to push your political agenda then the response that is going to be political.


Fire and groove said:
"some". The only thing it offered was visual effects and the "tacticool" aesthetic
Click to expand...

What a surprise from Bollywood. Even by their tradition, it was a good watch, normal public doesn't care about how 'accurate' it was...and neither do Bollywood fucks.

I'm not into blatant glorification/jingoism, especially when it brushes away the fuck ups and nuances that led us into our current state of affairs in the first place.
Click to expand...

First, learn the difference between a movie and a documentary. A movie is meant to be entertaining and if you know how to read then you would know that within the first 5 mins of the movie they provide the disclaimer that things were exaggerated for the entertainment purpose if your brain can't comprehend any basics like that then maybe just quit at this point.

The DA raid following Uri was a pointless endeavour, it solved no systemic issue at hand .Pakistan didn't care less about losing cannon fodder or the "effects" of the raid, and cross border raids weren't unheard of for them either, they themselves partook in them.
Click to expand...

Also, kek the butthurt here is real, how many URI like attack happened afterwards? Everyone knew that terrorists will keep coming but that didn't mean we shouldn't retaliate, it was needed at that time and the situation today is way better than it was in 2016. And the only reason it got political was due to our opposition who wanted to take one up against bjp.

People like you who bitch about 'politcal move' also bitch about 370 and caa and nrc. Aren't you the same guy who was seething in Pakistan thread about Muslims? You will be the first one if actual actions are started taking against so calm down.

It had no lasting effect on the insurgency as a whole, taking out a few launch pads didn't affect the radicalization which is where the real threat comes from anyway, nor did it affect the PoK insurgents in the long run who just rebuilt their pads and carried on.
Click to expand...

> leftist and commies who gloat over dead bodies of our soldiers were triggered(pretending) and made the whole issue political
> When the response was given by IA, why are you surprised that BJP wouldn't use political gains?

Hypocrisy and irony are strong with you people. Rest Indians feel way safer under this government now than we used to under upa fucks.

This was entirely a political move, the move here being the greatest state-sponsored copium for the fact that they still don't have a realistic roadmap for what needs to be done.
Click to expand...

Yeah, our men dying was not copium you fucking dolt, I know you have political agenda and it seems you people have still not recovered from 2019 so busy with copium due to that.

You people first oppose any action by the government by doing rona bout 'political' move and then also expect a solution at the same time and on an instant.

Opposition and likes of Pappu made it all political and it was imperative for the GOI to release the statement which would obviously be political.

Do you think movies like Kargil and Border were copium too? Was that the first time that urduwood made a movie on army?

Truth is that J&K situation is much better than it was years ago, whether you accept it or not, how many terrorist attacks happened under NDA inside India? The systematic problems that you were mentioning involve steps that will result in another anti-CAA and rona in the name of fascism by likes of you.

BTW Bollywood that you criticise is run by people like you who collude with our enemies, it was a result of that.

Again, i don't want this thread to derail but it's better to not hide your political agenda under the garb of criticism.

Marliii said:
If its fake then that is one hell of problem that guy is in.its genuine according to me
Click to expand...