Based on information on a Pawan Hans helicopter missing on 13 Jan 18, Indian Navy has launched large scale rescue operations to search for the missing helicopter. Four Indian Naval Ships (T11, T45, Tarasa and Teg), one Dornier aircraft and one Seaking helicopter have been deployed towards the area. The search efforts are being augmented by one P8I Long Range aircraft. In addition, CG ships and aircraft have also been deployed for SAR.

The helicopter took off from Juhu at 1006 h and was enroute to Oil Rig ‘NQO’ in Mumbai High North, 92 miles North West of Mumbai. Communication with the helicopter was lost at 1036 h in position 37 nm from Mumbai. The helicopter had five passengers in addition to two pilots.

Additional ships and aircraft are being kept ready at Mumbai for deployment as and when required.

As per last inputs, the wreckage has been located in position 37 nautical miles from Mumbai and four dead bodies have been recovered so far (as on 1430 h on 13 Jan 18).

The search operations by Indian Navy for the crashed Pawan Hans helicopter (C/s VT-PWA) continued throughout the night of 13 January 18 and have been continuing thereafter.

INS Teg with its integral helo assumed the duties of Senior Officer Search Force commencing 1715 H on 13 Jan and coordinated the search and rescue efforts with IN, ICG & ONGC assets.

In addition, IN Dornier (medium range aircraft) and P8I (long range aircraft) continued to augment surface search efforts late in the night of 13 Jan 18 and efforts with helicopters Seaking SK 520 and Chetak CH 429 (Ex INS Teg) have been continuing since AM 14 Jan 18. Additional debris sighted by ships/ aircraft are being recovered.

INS Makar, a special hydrographic ship with side scan sonar capability will supplement search efforts commencing PM 14 Jan 18. A total of 16 ships (02 IN, 05 ICG and 09 ONGC) and four aircraft (Seaking/Chetak from IN & Dornier/Chetak from ICG) have been on task since AM 14 Jan 18.

OSV TAG-15 (with side scan sonar) and OSV Samudra Sevak (OSV) are currently undertaking survey/ diving in the area All other IN, ICG and ONGC assets are participating in the search for locating the missing crew and debris of aircraft. 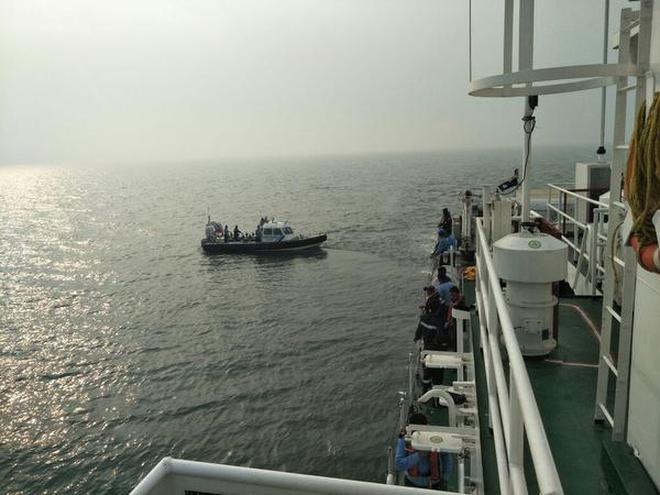 The helicopter with seven people on-board, including five ONGC officers and two pilots, crashed off Mumbai.

The Coast Guard has traced the Aircraft Voice Data Recorder (black box) of the Pawan Hans helicopter which crashed off the Mumbai coast on January 13 while the recovery of the remaining debris is in progress. Simultaneously, the Navy has widened its search operations for the two missing crew members of the chopper. “Search for the missing ONGC crew continues till recovery. Aircraft Voice Data Recorder (VDR) has been recovered and recovery of balance debris is in progress,” a Coast Guard spokesperson said on January 14.

The helicopter with seven people on-board, including five ONGC officers and two pilots, crashed off Mumbai minutes after it took off for the state-owned company’s oil installation in the Arabian sea on January 13.

A Navy spokesperson said on January 14 that the two Fast Interceptor Craft, INS Tarasa and the frigate INS Teg, were coordinating the search in the area along with Indian Coast Guard (ICG) Ships Samudra Prahari, Achook and Agrim.

The INS Makar (a twin hulled catamaran hydrography ship) from Karwar was also en route to area to augment search efforts, he said.

The ICGS Samrat also sailed out from Mumbai to join the search and rescue operations, he said.

Besides, ICG Dornier from Daman, IN Seaking 42 B from Shikra (helibase) and nine ONGC Vessels were also deployed for search in the area, he said.

The ONGC vessel TAG 15 undertaking side scan sonar operations has found some debris 600 yards from the wreckage position, the spokesperson said.

The diving team from Samudra Sevak vessel is preparing to undertake the search while the team from INS Teg is kept on standby, he said.

The Pawan Hans helicopter with five Oil and Natural Gas Corporation (ONGC) officers, including three of the level of Deputy General Managers, went missing around 10.40 a.m. on January 13.

ONGC, Coast Guard and Navy pressed helicopters and speed boats as soon as the information of the chopper going missing was received at the Juhu helibase.

ONGC has key oil and gas fields off Mumbai and Pawan Hans helicopters routinely ferry company employees and officers to the oil installations that are located as far as 160 km from the coastline.

The field in the offshore include Mumbai High, the nation’s largest oil field and Bassein fields, the largest gas field.

The helicopter crash is not the first accident in ONGC’s history. In August 2003, an Mi-172 helicopter crashed off the Mumbai coast killing 27 people and pilot on-board.

Pawan Hans said in a statement that the French-made Dauphin SA 365N3 helicopter met with an accident and the chopper crash is being probed by the aviation regulation DGCA.

While the search is on for the remaining one person, the ill-fated Chopper's VDR too has been recovered, ONGC said in a statement. PTI file photo for representation.

Six bodies including that of all the five ONGC officers and one of the two pilots of ill-fated Pawan Hans chopper, which crashed in Arabia Sea yesterday, have been recovered.

While the search is on for the remaining one person, the ill-fated Chopper's VDR too has been recovered, ONGC said in a statement.

Bodies of ONGC Officials P N Srinivasan, R Saravanan, Jose Antony, Pankaj Garg and one of the pilots Capt R Ohatkar, have been identified, the statement said. "The identification process for the sixth body is still on."

"During the Search and Rescue (SAR) Operations on January 14, 2018 the VDR of the chopper has been recovered. Search operation is on for the remaining debris of the production chopper VT PWA," it said.

The search operation is being steered by the ONGC top management led by Shashi Shanker, CMD ONGC.

Shanker, who has been camping in Mumbai to oversee the search operations as well as ensuring all support for the bereaved families, has stated that a high level independent investigation will be immediately instituted to ascertain the reasons.

The recovered bodies of ONGC executives, after necessary procedures, have been handed over to the family members and two families have taken the bodies to their native places for last rites as desired by them. ONGC is extending all possible help to the bereaved families in this hour of grief and crisis, it said in the statement. 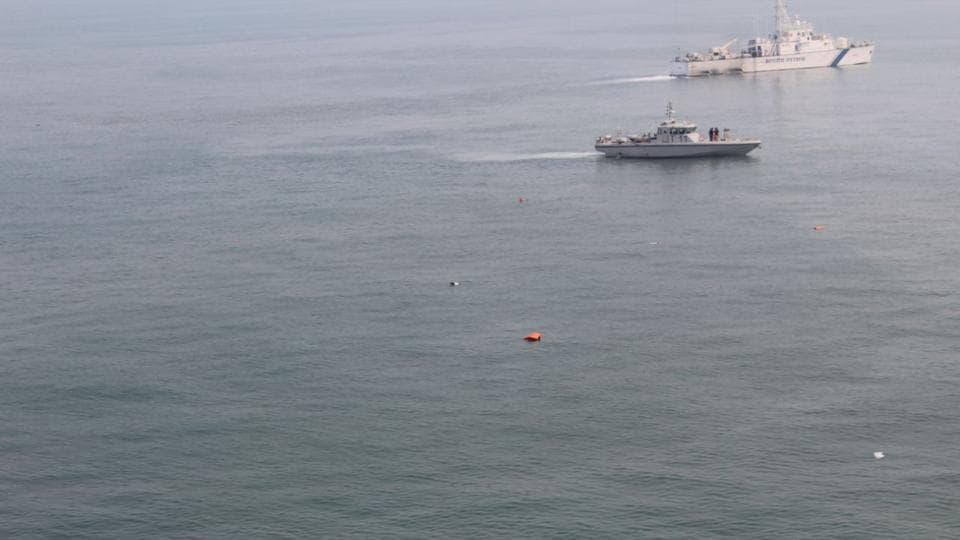 However, a search is still on for one missing pilot, while the bodies of five ONGC deputy general managers and one pilot have been recovered till late on Saturday and brought to shore.

The Dauphin chopper took off at 10.20 a.m. Just 15 minutes later, it suddenly lost contact with both the Mumbai ATC and the Oil and Natural Gas Corporation (ONGC) in Mumbai.

At that time, it was reported to be flying around 55 km off the Mumbai shoreline, on a regular sortie to ferry the ONGC officials to ONGC’s Bombay High gas-oil fields, around 175 km northwest from here.

A massive air and sea search and rescue operation was launched by the Indian Navy, Indian Coast Guard and by late Saturday evening debris of the chopper and six bodies were recovered near Uttan, off Thane coast.

The VDR could provide clues on the circumstances and caused leading to the helicopter crash which has stunned the ONGC and PHL establishments.

The ONGC officials were identified as P. N. Sreenivasan and Pankaj Garg (both DGM, Mechanical), Jose Antony, R. Sarvanan and V.K. Bindulal Babu (all DGM, Production) and all based in Mumbai.

The two pilots have been identified as Captains V.C. Katoch and Ramesh Oathkar.

Capt VC Katoch, one of the two pilots of the ill-fated Pawan Hans helicopter that crashed off the Mumbai coast this morning, belonged to Panchkula.

The helicopter had seven persons on board, including five ONGC officials. Five bodies have been recovered so far.

Capt Katoch was a former Army Aviation Corps pilot. According to Army sources, Katoch was an alumnus of the National Defence Academy and was commissioned into the Army in December 1985. He later converted to the Army Aviation from his parent arm. He left the Army as a Lieutenant Colonel after putting in 25 years of service.

He had been flying with the national helicopter carrier, Pawan Hans, for about 11 years. Capt Katoch’s associates recall him as a highly professional flier, with a lot of experience, who was amiable, social and got along well with his colleagues.

Capt Katoch, who was married, with two daughters, had a flat in Panchkula but was residing in the Pawan Hans Colony in Mumbai because of his assignment and the nature of his duties.
You must log in or register to reply here.
Similar threads
Indian Navy's 3rd P28 ASW Corvette 'Kiltan' Launched
Indian Navy has any plans to buy Unmanned surface Vessel boat Katana or Protector
Indian Navy to procure F-18
Indian Navy more likely to select F 18 than rafales
Share:
Facebook Twitter Reddit WhatsApp Link