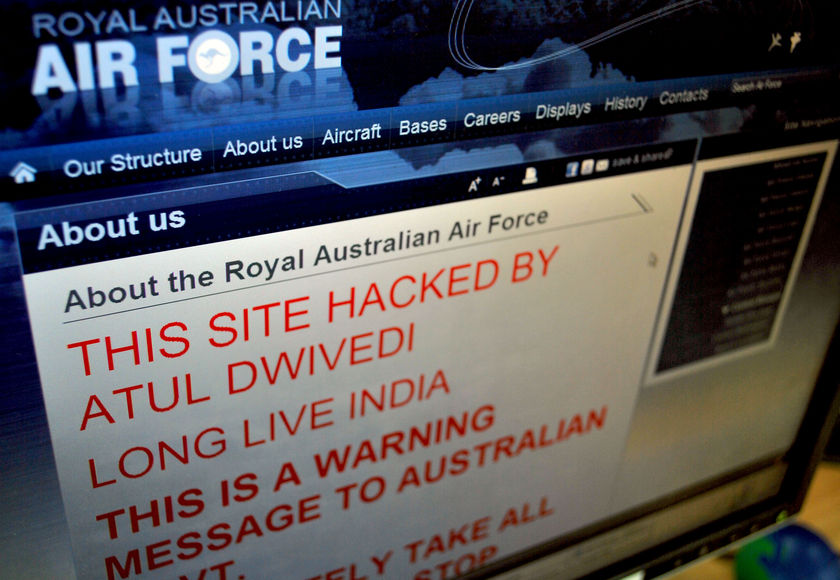 By Lexi Metherell for AM

The RAAF website on July 16, 2009, when it was hacked by someone protesting against violent attacks on Indian students. (ABC News: Nic MacBean)

The Australian delegation sent to India to try to soothe anxiety over the attacks on Indian students has just finished its tour.

But an embarrassing security breach in Australia shows that not everyone is accepting the message that action is being taken to keep students safe.

A hacker has attacked the public website of the Royal Australian Air Force (RAAF), warning the Australian Government to stop the "racist attacks" or more websites will be hit.

The hacker, going by the name of Atul Dwivedi, wrote: "This is a warning message to Australian Government. Immediately take all measures to stop racist attacks against Indian students in Australia else I will pawn all your cyber properties like this one."

The hacker posted the message on the front page of the RAAF website earlier this week, forcing it to be shut down for about eight hours.

The Defence Department is quick to point out that only the external RAAF website was hit but is quiet on whether any sensitive information was compromised.

It says the breach is under active investigation.

An Australian Federal Police spokesman says the matter has not been referred to it for investigation.

Gautam Gupta from the Australian-based Federation of Indian Students disagrees with the hacker's method but he supports the sentiment of the message.

"This view is very clearly not about Australia but about the Australian Government's inaction," he said.

The spate of attacks on Indian students, particularly in Sydney and Melbourne in recent months, sparked intense media attention in India.

An Australian delegation, which included Education Department officials and a Victorian Assistant Police Commissioner, has just wrapped up a week long visit to India to try to soothe the anxiety the attacks have generated.

This week's hacking of the website has scored some air time.

But a senior editor at India's Hindustan Times newspaper says the story is largely old news in India.

And Pramit Pal Chaudhuri says the delegation arrived too late to generate much public interest.

"At least in the major newspapers in Delhi, they just got about two or three inches of press coverage because by then already you had seen a fair amount of disinterest building up into the media as the story sort of began to fade off of page one and deeper and deeper into the newspaper," he said.

But he says the damage may already have been done.

"Speaking with Australian diplomats who are serving here, they have not quantified the numbers, [but there has been] a very sharp drop in student visa applications and their only hope really is that they will recover as this entire issue sort of fades away," he said

Some may disagree with me but i have to say Kudos to Atul Dwivedi. :d_training:
E

What are you going to achieve by hacking a website that most people don't visit... plus, is a dangerous precedent setting for other youngsters...
X

What are you going to achieve by hacking a website that most people don't visit... plus, is a dangerous precedent setting for other youngsters...
Click to expand...

Yes, it is an old report but the news is still hot i think. As i mentioned above some might disagree with me but i personally admire the courage of that dude.....i mean he didnt do that for fun, he did it for a cause. Poeple take different ways to protest and this is one among them, havent u heard the news "green peace activists got arrested from Mount Rushmore, US as an attempt to encourage obama to take action against Global warming?". The whole point is to get the attention of the government and pointing out something need to be done.
X

A 6 day old report.....not so Ancient. Its keep happening bro. Gov should take some serious steps to stop this violance.

Melbourne: Two fresh cases of assault on Indians have been reported in Australia, with three students attacked in two separate incidents, even as the Immigration Minister prepares to leave for New Delhi to reassure that his country is a safe destination for students and “not racist.”

Two students were injured outside a Sydney hotel last week in what appeared to be a petty street crime, apart from a separate incident surfacing from Adelaide.

“When the police arrived they could not locate anyone there ... They later found that two people had been taken to Wollongong Hospital by a friend,” Mr. Wyver was quoted as saying by the Herald Sun.

“They attended the hospital and there appears there has been some sort of fight outside the hotel. They didn’t want any action in relation to that fight, they weren’t badly injured,” he said.

The events came even as Immigration Minister Chris Evans prepared to leave for New Delhi to reassure Indians of their safety Down Under. Mr. Evans said Australia remained a safe destination for students and welcomed Indians to work and study in the country.

Mr. Evans, who would meet Minister for Overseas Indian Affairs Vayalar Ravi, said the government wanted to counter negative publicity in the sub-continent about the recent wave of attacks against Indian students in Australian cities. He said that so far there had been no evidence of a decline in Indian student applications. The recent figures had shown that the demand from the students had continued to be strong and, in fact, grew a little bit in June. — PTI

The Hindu : Front Page : 3 Indian students attacked in Australia
A

Add me to the list of people who think hacking sites to prove a point is wrong. It's one thing to target terrorist sites but wrong to target military sites of other nations. Aus govt is sure letharghic when dealing with attacks on students but hacking RAAF site is not the way to deal with the problem.

keep it up mate. Today life is not doing Gandhigiri. Today time is act as Shaahed Bhagat singh. Hit them and hit them hard.....
N

Hacking websites when your countrymen here are busy defending Australia and actually pointing fingers at their own country? Well that's just dumb.

The Defence Department is quick to point out that only the external RAAF website was hit but is quiet on whether any sensitive information was compromised.
Click to expand...

Illawarra Hotel on Keira Street in Wollongong early this morning. [17 july]
Well of all places early morning Keira street. Get a few fact before trying to media hype.
Drunk brawl comes to mind in this case.

The victim told police he was walking through Gilbert Place about 6am yesterday when the four men bailed him up and threatened him with a knife.
...
The victim described all four as Aboriginal in appearance, one had no shirt on, about 180cm tall, aged in his late 20s and wearing a black and grey beanie with black pants.

The others were described as wearing dark clothing.