Haldilal said:
Ya'll Nibbiars Retail Digital Payments saw growth. And In the past year, retail digital payments have seen huge growth as more people gravitated towards digital modes of transaction owing to fear of contracting the virus and convenience. Data from the Reserve Bank of India (RBI) suggests, a slowdown in wholesale transaction value, but volume growth withstood the pandemic. Transactions through National Electronic Funds Transfer NEFT, National Electronic Toll Collection NETC, and the Bharat Bill Payment System BBPS registered acceleration over the previous year. Other retail payment platforms such as Unified Payments Interface UPI, Immediate Payment Service IMPS, and National Automated Clearing House NACH saw a near doubling of both transaction volume from 12.5 billion to 22.3 billion, and value from Rs 21.3 trillion to Rs 41 trillion between FY2020 and 2021.

looks like the numbers in this article is being under reported.

ezsasa said:
looks like the numbers in this article is being under reported.

Heh, little hope of a rollback in fuel cess and excise duty before economic activity goes back to pre-pandemic levels.

Prime Minister has always championed digital initiatives. Over the years, several programmes have been launched to ensure that the benefits reach its intended beneficiaries in a targeted and leak-proof manner, with limited touch points between the government and the beneficiary. The concept of electronic voucher takes forward this vision of Good Governance.

e-RUPI is a cashless and contactless instrument for digital payment. It is a QR code or SMS string-based e-Voucher, which is delivered to the mobile of the beneficiaries. The users of this seamless one-time payment mechanism will be able to redeem the voucher without a card, digital payments app or internet banking access, at the service provider. It has been developed by National Payments Corporation of India on its UPI platform, in collaboration with the Department of Financial Services, Ministry of Health & Family Welfare and National Health Authority.

It is expected to be a revolutionary initiative in the direction of ensuring a leak-proof delivery of welfare services. It can also be used for delivering services under schemes meant for providing drugs and nutritional support under Mother and Child welfare schemes, TB eradication programmes, drugs & diagnostics under schemes like Ayushman Bharat Pradhan Mantri Jan Arogya Yojana, fertilizer subsidies etc. Even the private sector can leverage these digital vouchers as part of their employee welfare and corporate social responsibility programmes.

$684 million facility is expected to commence operations in 2023 Fully-vertically integrated facility will support India’s goal of self-reliance in clean...

Most systems are purchased from China.

This is our in-house developed system that matches global standards. We call it "VIDUR"

The IoT system is named "Meghdoot"

The analytics platform will be called "Vasistha"


I pledge that once Covid dust settles down, I will work with my team to create atleast one indigenous technology that will reduce our dependence on other countries. And I will try my best not seek any government support for this.

$684 million facility is expected to commence operations in 2023 Fully-vertically integrated facility will support India’s goal of self-reliance in clean...

So we are getting a lot of investments in energy sector manufacturing, wish we become the best country in terms of renewable energy production in terms of percentage.

Kill your own nutrient rich rice variety and now when everything is done and dusted look for the same thing we destroyed.

Bhumihar said:
Kill your own nutrient rich rice variety and now when everything is done and dusted look for the same thing we destroyed.
Click to expand...

We have many variety still , need to be located and sown again , and they can be improved too

Mixed in rice would means mean can be handled within existing setup.

Mixed in rice would means mean can be handled within existing setup.
Click to expand...

No I mean when we already have malnutrition in our country, government should have focussed on providing supplement tablets to them if food insecurity is there in agriculture dependent areas due to various reasons.

FalconSlayers said:
No I mean when we already have malnutrition in our country, government should have focussed on providing supplement tablets to them if food insecurity is there in agriculture dependent areas due to various reasons.
Click to expand...

There was a time when govt experimented with supplying females with iodine using bindi.

it was a private individual’s suggestion, not govt policy. Let’s not worry too much about it.


The GST collection for the returns filed between 1st July to 5th July2021 of ₹ 4,937 crore had also been included in the GST collectionin the press note for the month of June2021since taxpayers were given various relief measures in the form of waiver/reduction in interest on delayed return filing for 15 days for the return filing month June21 for the taxpayers with the aggregate turnover uptoRs. 5 crore in the wake of covid pandemic second wave.


GST collection, after posting above Rs. 1 lakh crore mark for eight months in a row, dropped below Rs. 1 lakh crore in June 2021 as the collections during the month of June 2021 predominantly related to the month of May 2021 and during May2021, most of the States/UTs were under either complete or partial lock down due to COVID. With the easing out of COVID restrictions, GST collection for July2021 has again crossed₹1 lakh crore, which clearly indicates that the economy is recovering at a fastpace.The robust GST revenues are likely to continue in the coming months too.


The table shows the state-wise figures of GST collected in each State during the month July 2021 as compared to July 2020.

Bhumihar said:
Kill your own nutrient rich rice variety and now when everything is done and dusted look for the same thing we destroyed.
Click to expand...

True... white rice + suger + palm oil / burnt oil + potato which is replacing vegetable.. These 4 have created millions of dibetic and heart patients in india .. We dnt see it because it does nt impact GDP in subtle manner but indirectly it must have billions of loss .. Specially white rice and potato .. This evil combination has reached every corner of country . Another big thing i have noticed in india is spread of newspaper in street food .. Many dnt know the toxic chemical in newspaper ink .. It can make men infertile and cause many other problems . Poors and middle class most vulnirable to this ..

doreamon said:
True... white rice + suger + palm oil / burnt oil + potato which is replacing vegetable.. These 4 have created millions of dibetic and heart patients in india .. We dnt see it because it does nt impact GDP in subtle manner but indirectly it must have billions of loss .. Specially white rice and potato .. This evil combination has reached every corner of country .
Click to expand...

Best and healthy is veg momos without maida, I prefer soya flour and wheat flour dough for making them.

Ya'll Nibbiars The government-backed National Asset Reconstruction Company (NARCL) for the resolution of bad loans through an asset management company AMC structure is likely to have separate trusts for each non-performing loan NPA account bought from the banks. The memorandum of understanding signed by the eight banks includes the provision of various trusts to be set up for the resolution of distressed assets. In the private sector asset reconstruction companies ARCs framework, the ARC plays the dual role of a trustee as well as of AMC. However, there is a provision of a separate AMC named India Debt Management Company IDMCL under the NARCL, which would exclusively be tasked with the management of distressed assets. The multiple trusts will come under the NARCL, which would be buying assets directly from the banks.

The bad loan market already has private ARCs, but the resolution track record of these ARCs is not good. The insolvency and bankruptcy code IBC is also mired in delays and low realisation, which is a cause of concern for the government. In a government-dominated banking system, the gross NPAs are already over Rs 7 lakh crore. Post pandemic, the stress in the banking system is hidden because of the moratoriums, government guarantees, and one-time loan restructuring. The setting up of another ARC is part of the government's initiative to clean up the banking system so that lenders could focus on lending to needy and productive sectors.The banks have shortlisted close to two dozen NPA accounts with a total loan value of close to Rs 90,000 crore, which would get transferred to NARCL in the first phase.

The NARCL will set up separate trusts for these two dozen accounts and transfer the assets at a price they are bought from the banks, which is generally at a discount to the book value. The 85:15 structure of security receipts SRs, which would be the consideration for bad loans, will be applicable for each trust. The NARCL will then try to attract the investors for SRs.

The investors could buy as many SRs as they could buy from the trust managing that particular asset. There is likely to be a partial government guarantee for the SRs issued by the trusts. But, market experts say the critical factor would be the transfer pricing. "The banks, which are also the shareholders of NARCL, will try to transfer the assets at a lesser discount to book value. This would inflate the acquisition cost vis-a-vis the expected realisation value. This will keep the investors way, they say.

There is also a strong possibility of clubbing certain sector-specific assets for selling them to investors or distressed funds by way of SRs. But that would mean combining all the sector-specific trust under one roof. This would be a complicated exercise. They could do it, but it would be better to try such models at a later stage. The ARC-AMC would manage and dispose of the assets to alternate investment funds AIFs and other investors for eventual value realisation.

Ya’ll Nibbiars partial due to the recovery and Written off's. 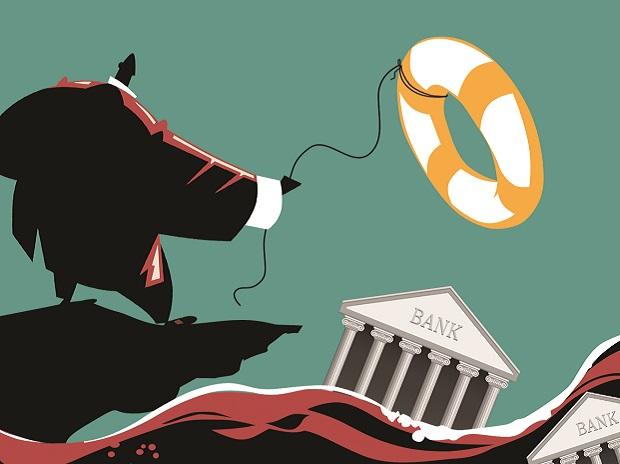 Scheduled commercial banks were carrying NPAs worth Rs 8.96 trn on their balance sheet at the end of March 2020