Pranab Mukherjee has resigned as Union Finance Minister of India on Tuesday, in his own words, "to embark on a new journey", implying his move towards Raisina Hill as the President of India. Congress party will sorely miss Pranab Mukherjee in the government who has been the lynchpin of UPA government, troubleshooting the problems faced by Congress party with the coalition partners to make this UPAII work stably without any hiccups. But one section that will not miss the presence of Pranab Mukherjee from finance ministry is the Industry lobby.

Let's take a look at the journey of Pranab Mukherjee as the finance minister of India from 2009-2012. Pranab Mukherjee was anointed as finance minister in the background of gruesome 26/11 attacks on Indian financial hub Mumbai in 2008 that necessitated the transposition of the then finance minister P Chidambaram to home ministry. He took office in early 2009 when world economy was reeling under recession while Indian economy was showing signs of resilience with a healthy GDP growth rate. He inherited an economy that was not in prime form but was in good condition with sound economic fundamentals.

He presented his first budget as finance minister on July 6, 2009, in which he did not announce any new policy decisions or economic reforms but showed his socialist tendencies by increasing the funding of subsidies and leaking socialist policies like Mahatma Gandhi National Rural Employment Guarantee Scheme (MNREGA). The budget was so short on expectations that the BSE stock exchange Sensex has tanked 900 points (5.8%) on a budget day, which was unprecedented in the history of budget presentation day. 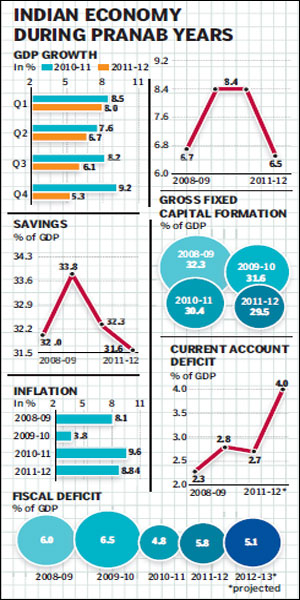