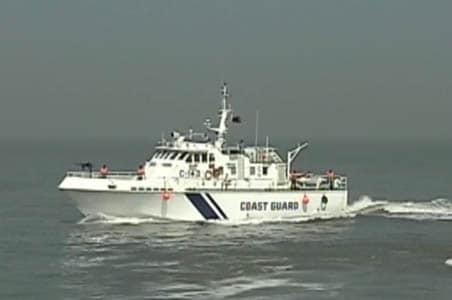 KOCHI, KERALA: The 15th vessel in the series of 20 Fast Patrol Vessel, ICGS Arinjay, has been delivered by the Cochin Shipyard Limited (CSL) to the Indian Coast Guard (ICG) more than two months ahead of schedule.

The Protocol of Delivery and Acceptance was signed between Sunny Thomas, Director (Technical), CSL and Commanding Officer (Designate) of the vessel Commandant Ajay Kumar Mudgal.

Many senior officials of ICG and CSL were present on the occasion.


The vessel will be operated from the Coast Guard Station at Okha, Gujarat, said a CSL release.

These Fast Patrol Vessels (FPV) are primarily intended for patrolling within the Exclusive Economic Zone and Coastal Patrol, carrying out anti-smuggling, anti-piracy and search and rescue operations, and for fisheries protection and monitoring.

They also have a secondary role of providing a communication link, and escort coastal convoys, in times of hostilities and war.

The fourteenth ship of the series, ICGS Apoorva, was delivered in July this year almost two months ahead of the contractual schedule.

By achieving the FPV deliveries once in 1.5 to 2 month intervals as against the contractual requirement of once in 3 months, the yard is planning to complete the contract much ahead of schedule, thus ensuring the coastal security of the nation, the CSL said.

The last vessel of the order is to be delivered by March 2017 as per the contract with ICG. However, with the current pace of construction, Cochin Shipyard is targeting to accomplish this by mid-2016, it said.

Thirteen vessels delivered have already been commissioned into the service of Indian Coast Guard and are vigilantly guarding the nation's vast coastline.