Indian bill to allow foreign universities to operate in India 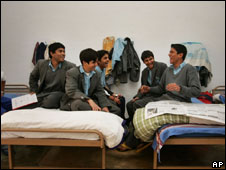 India's government has approved a plan to allow foreign universities to set up campuses and offer degrees in India.

The proposal, which needs to be ratified by parliament, is expected to benefit thousands of Indian students who head abroad to study.

India is reforming its higher education system after concerns that it faces a shortfall of qualified graduates.

Every year thousands of English-speaking Indians head to countries such as the US and Australia to study.

Some analysts project that India's growing economy will face a shortfall of half a million qualified graduates over the next five years.

Federal Education Minister Kapil Sibal described the bill as "a milestone which will enhance choices, and increase competition and benchmark quality".

If parliament approves the law it could see universities such as Harvard and Oxford set up institutions in India.

It is thought leading foreign universities could be attracted by India's large number of English speakers and its burgeoning middle class.

India has allowed foreign investment in education for a number of years, but foreign institutes have not been permitted to grant degrees.

The bill had been opposed by some political parties, particularly those from the left, on the grounds that it will benefit only elite Indians with poorer students unable to afford to pay high fees.