The Indian army Friday celebrated 'Naoshera Day' to remember its heroes who made laid down their lives to save the town in Rajouri district of Jammu region during the India-Pakistan war of 1947-48.

"Naoshera Day was celebrated today with all its glitter and military precision to remember the gallant heroes of Indian army, who made the supreme sacrifices to save Naoshera," said a defence statement issued here.

A felicitation ceremony for war widows, veterans and disabled soldiers was also conducted on the occasion.

The function was attended by defence and police personnel, official of the civil administration, school children and locals of Naoshera, it added.

The Battle of Naushera

The capture of Jhangar on 24 December 1947 gave the enemy a tremendous advantage. It was, hence, vital to Indian strategy to recapture Jhangar. The battle of Naushahra on 06 February 1948 was decisive in this context and paved the way for the recapture of Jhangar later on. Lt. Col. R.G. Naidu, CO of 2 Jat, was put in command of Operation Satyanas for clearing the enemy from the area around Beri Pattan. The troops occupied Tung on January 23rd and crossed the Thandapaniwali Tawi the next morning. In the early hours of January 25th, as they advanced to attack Siot and Pt. 2502, they came under heavy enemy fire and had to make a retreat, but not before inflicting heavy casualties on the enemy, estimated to be 100 dead and wounded.

To weaken and disrupt the enemy's offensive, a mobile force known as 'Cheeta Force' was formed. It consisted of Stuart tanks from 7 Light Cavalry. Orders were given to this mobile force on January 24th. The plan was simple. Two small detachments of mixed armour and infantry were to be established at Amberala and Chordhaki to guard the rear; the rest of the mobile column was to push right up to area Assar-Kadala-Bhimbar to destroy the enemy base. The mobile force launched its operation at 0530 hours on January 25th. Despite earlier reverses, it was able to inflict heavy losses on the enemy at Amberala, Chordhaki, and Assar/Kadala.
Bharat Rakshak :: Land Forces Site - Defending Kashmir

Brigadier Mohammad Usman (15 July 1912 – 3 July 1948) was the highest ranking officer of Indian Army killed in the Indo-Pakistani War of 1947, who as a Muslim became a "symbol of" India's "inclusive secularism". At the time of partition of India he with many other officers declined to move to the Pakistan Army and continued to serve the Indian Army. He died in July 1948 while fighting the raiders in Jammu and Kashmir.
Brig Usman was born at Bibipur, Azamgarh in Uttar Pradesh on July 15, 1912. His Mother Was Jamilun Bibi D/o Abdul Kabir Ansari Belongs to Ansari Family of Yusufpur And Father Was Mohammad Faqooq Khunambir of Bibipur (Azamgarh) Was Shaher Kotwal Benaras.

Young Usman was educated at Harish Chandra High School in Varanasi. he was an alumnus of the prestigious Royal Military Academy at Sandhurst.
He was commissioned in the Baluch Regiment. At the time of partition he was offered to become Chief of the Pakistani Army but he chose to stay in India.

When the Baluch Regiment was allotted to Pakistan, Brig Usman was transferred to the Dogra Regiment. At the time of Indo-Pakistani War of 1947, Brig Usman, Commander of 77 Para Brigade was given command of 50 Para Brigade, deployed at Jhangar in December 1947.

At the time of Indo-Pakistani War of 1947-48 Brigadier Usman was posted at the Jammu and Kashmir front as the brigade commander of the 50 Para Brigade. He led his soldiers from front and in January–February 1948 repulsed a fierce attack on Nowshera and Jhangar, two highly strategic locations in Jammu and Kashmir. He was thence known as the Lion of Naoshera. However, he was killed in action while fighting the Pakistan Army and the tribal raiders on July 3 of that year.

An Indian journalist, Khwaja Ahmad Abbas, wrote about his death, "a precious life, of imagination and unswerving patriotism, has fallen a victim to communal fanaticism. Brigadier Usman's brave example will be an abiding source of inspiration for Free India". Brigadier Usman was awarded the Indian military honour Mahavir Chakra posthumously.


This year, 15 July marked the 100th birth anniversary of Brigadier Mohammed Usman, Maha Vir Chakra [posthumous], the 'Sher of Naushera', as he got to be known after the battle of Naushera during the first India-Pakistan war of 1947-48. He was 12 days short of his 36th birthday when he laid down his life defending Jhangar, on 03 July 1948. Born on 15 July 1912 at Bibipur into a prominent family of today's Azamgarh district, Uttar Pradesh, he was the first son after three daughters of Khan Bahadur Mohammed Farukh, a widely regarded police official.

Usman and his younger brothers, Subhan and Gufran, were educated at Harish Chandra Bhai School, Varanasi. At the age of 12, he had jumped into a well to rescue a drowning child. Later, when Usman made up his mind to join the Army, despite the limited opportunities for Indians to get commissioned ranks and despite intense competition, he succeeded in getting admission to the prestigious Royal Military Academy at Sandhurst. Upon completion of his training Usman was commissioned into the Baluch Regiment.

At the time of partition, Usman being a Muslim officer in the Baluch Regiment, was under intense pressure from the newly born Pakistan's leadership to opt for the Pakistan army. But so strong were his ideals of his motherland that even the ultimate bait of becoming the Pakistan Army Chief proved unsuccessful in convincing Usman.

When the Baluch Regiment was allotted to the Pakistan army, Brig Usman was transferred to the Dogra Regiment. But war had already been thrust upon India when Pakistan sent tribal irregulars and its soldiers into Jammu & Kashmir. Even as the situation in the Kashmir valley stabilised the threat continued to be serious in the Jammu region. Brig Usman, commanding 77 Parachute Brigade, was sent to command the 50 Paraachute Brigade, deployed at Jhangar in December 1947. On 25 December 1947, with odds heavily against him, Jhangar was wrested by the Pakistanis. Located at the junction of roads coming from Mirpur and Kotli, Jhangar was of strategic importance, but more compelling was Brig Usman's fierce pride in his men and determination to restore their honour. On that day the brigadier took a vow to recapture Jhangar – a feat he accomplished three months later, but at the cost of his own life.

During the defence of Naushera against overwhelming odds and numbers, his fiery leadership had resulted in major defeat of the enemy at and around Naushera with 2000 casualties [about 1000 dead and 1000 wounded] while he suffered only 33 dead and 102 wounded. That battle earned him the title Naushera ka Sher. The same Pakistanis, who had earlier tried to motivate him to join the Pakistan Army and make him its chief, announced a then astronomical sum of Rs 50,000 as a prize for his head, in 1948. Unaffected by praise and congratulations, the Brigadier continued to sleep on a mat laid on the floor as he had vowed that he would not sleep on a bed till he recaptured Jhangar, from where, outnumbered by a large force of infiltrators inducted by Pakistan Army, he had to withdraw earlier.

The then Lieutenant General K M Cariappa [later General and C-in-C, Indian Army/Chief of Army Staff and years after retirement made Field Marshal], who had taken over as Western Army Commander, brought his tactical headquarters forward to Jammu to oversee the conduct of two important operations, the capture of Jhangar and Poonch. The capture of Jhangar was of special significance for Brig Usman. The operation commenced in the last week of February 1948. 19 Infantry Brigade advanced along the Northern ridge, while 50 Para brigade cleared the hills dominating the Naushera-Jhangar road in the south.

The enemy was eventually driven from this area, and Jhangar was recaptured. Pakistan brought its regular forces into the fray in May 1948. Jhangar was once again subjected to heavy artillery bombardment, and many determined attacks were launched on Jhangar by the Pakistan Army. Brig Usman however frustrated all enemy attempts to recapture Jhangar. It was during this arduous defence of Jhangar that Brig Usman was unfortunately was killed on July 3, 1948, by an enemy 25-pounder shell. His last words were 'I am dying but let not the territory we were fighting for fall for the enemy". For his inspiring leadership and great courage, he was awarded the Maha Vir Chakra posthumously.

Brig Mohammed Usman was then the highest ranking Indian Army officer who died fighting during the first Indo-Pak war 1947-48 and was given a state funeral.

A man of simple taste and a teetotaller, Usman remained a bachelor throughout his life. He used to donate a large part of his salary to support poor children and pay for their education. Brig Usman was indeed an epitome of valour, a great patriot and nationalist.
He is buried in a grave in Jamia Millia Islamia campus in New Delhi.

Upender Sood a film director has produced a film on life of Brigadier Usman.

His birth centenary was celebrated in 2012 by Indian Army at Jhajjar. A Paramotor Expedition was organized by Gorkha Training Centre in the memory of Brigadier Usman.
W

www.outlookindia.com | A Lion, To The Last 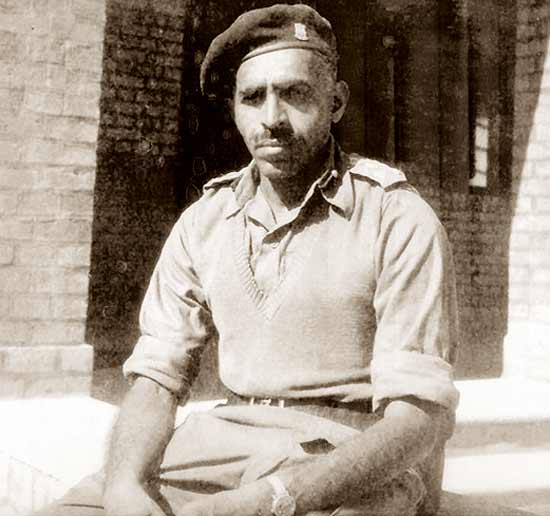