Night capabilities, see-through armour — how Army is upgrading its Russian combat vehicles
New Delhi: The Army has initiated trials involving three private Indian companies for the upgrade of the over 2,500 Russian Infantry combat vehicles — BMP II — that have been in service since the late 1980s, to give them night fighting capabilities as well as anti-drone measures besides a high-power engine.

Sources in the defence and security establishment told ThePrint that the upgrade also includes a specialised ammunition that can be fired in the air to explode mid-air to take down drones and loitering munitions of a particular size.

The good old BMP 2 forms the backbone of India’s Mechanised Infantry and has a crucial role in combat, including in Eastern Ladakh where it has been deployed in large numbers to tackle the Chinese.

The BMP, being manufactured by the state-owned Ordnance Factory Board (OFB) under license from Russia, lacks night-vision capability, literally leaving it blind when the sun sets, or when there is smoke, dust or fog. Hence, the Army was keen on an upgrade even as it pursues a different programme for Futuristic Infantry Combat Vehicle (FICV) that will replace these BMPs.

The programme is being pursued through the government’s iDEX (Innovation for Defence Excellence) initiative in which three firms have qualified.

The three firms, sources said, in contention are Tonbo Imaging, Big Bang Boom and Dimensions NXG. Incidentally, Bengaluru-based Tonbo Imaging is the only start-up to have proven and successfully deployed an operational system and, the sources add, it completed the iDEX challenge first because it already had a working product.

One of the other companies’ systems was functionally flawed originally and the other’s was merely a concept, sources explained, adding that the delay in trials was because the Army wanted more companies for trials and did not want a single vendor situation even though an Indian company had successfully met the criteria much earlier.

The user trials for the upgrade started last week in Hyderabad and the biggest change would be the “see through armour” that will enable the men inside the BMPs to get a full view of the external situation while still inside, be it night or day.

“The see-through armour is going to be a big technological leap that will increase situational awareness,” a source said.

ThePrint had in 2021 witnessed a physical presentation of the “see through armour” that provides the commander, his driver and the gunman a 360-degree view even at night. The technology enhances the vehicle’s all-round survivability and provides an extra edge in combat.

The solution for BMPs’ weakness comes through cameras and magnetic trackers. The BMPs will be fitted with over half a dozen cameras which will be integrated with a helmet display. This will mean that when the commander turns right, the headgear displays images of the surroundings onto the insides of the tank as if he was seeing through the armour. A magnetic tracker senses the head movement of the wearer and displays video from the same direction.

Adding to the capability is that the driver’s head-mounted display can also interface with the GPS system for precise manoeuvering and situational assessment. This meant the commander was able to see a wider coverage of possible targets and threats.

Other upgrades planned on BMPs
Sources said that given the changing warfare scenario, there is a requirement to equip the army’s Mechanised Infantry with state-of-art missiles and lethal capability beyond visual range (BVR). This includes the Fire and Forget Anti-Tank Guided Missiles (ATGMs).

Multiple indigenous options are being explored to equip the Mechanised Infantry with contemporary third Generation Fire and Forget ATGM, including ones being developed in India.

Another acquisition planned is that of the Canister Launched Loiter Munition System integrated on BMP 2/ Carrier Mortar Tracked (CMT) chassis.

To enable anti-drone capability on existing equipment, changes in aerial sight for effectively exploiting the ability of stabilised and automatic 30 mm Cannon and co-axially mounted 7.62 mm Machine Gun (PKT) to engage aerial targets is being pursued.

The acquisitions planned in the tracked category includes the FICV that will replace BMP 2.

The Army will move the Ministry of Defence for Acceptance of Necessity (AoN), the first stage of acquisition process, next month for 480 FICV, sources said, adding that this would be a programme.

The other acquisition planned is the Nag Missile System (NAMIS) for Reconnaissance and Support (Tracked) Battalions.

The ministry had accorded amendment to AoN for quantity 13 Nag Missile Carrier (NAMICA) and 293 Nag Missiles on 26 July 2022.

Another tracked family acquisition will be the Infantry combat vehicle, Command (ICV Comd) as the Command and Control platform. The AoN for quantity 177 ICV Comd was accorded by the ministry, also on 26 July 2022.

In the wheeled family category, the Army is looking at New Wheeled Armoured Fighting Vehicle (Wh AFV) to replace BRDMs, reconnaissance vehicles. AoN for quantity 105 Wh AFV and 1,080 ATGM was accorded by the ministry on 6 June 2022. 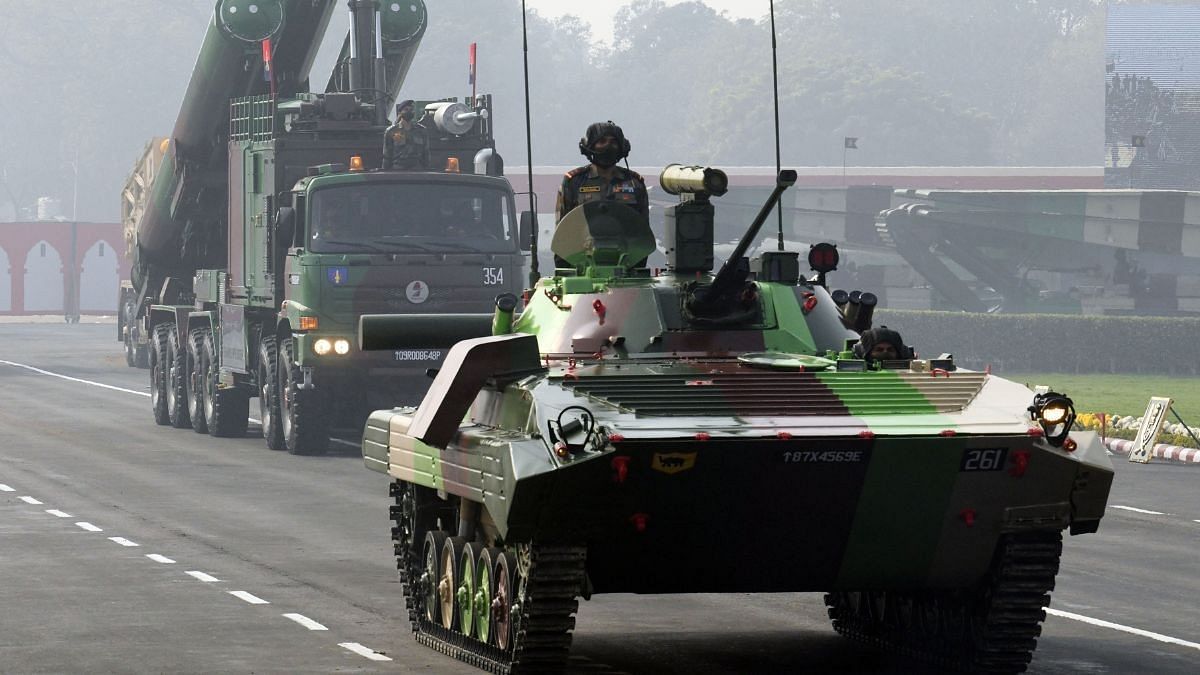 BMP 2 forms the backbone of India’s Mechanised Infantry & plays a crucial role in combat including in Eastern Ladakh where it's deployed in large numbers. User trials for upgrade on.