New Delhi, July 8: A 270 personnel contingent of the Indian Armed Forces comprising marching columns and a combined military band from the Army, the Navy and the Air Force left here today for Paris to participate in the
French National Day.

The 400 strong contingent, commanded by Air Commodore RK Mathur, will take part in the march past on the Bastille Day.

Prime Minister Dr. Manmohan Singh will be the Chief Guest at the French National Day Celebrations in Paris this year.

The French National Day marks the anniversary of the storming of the Bastille fortress-prison on July 14, 1789.

A contingent of Indian troops left for Paris Wednesday to join French soldiers in next week's Bastille Day parade where the Indian premier will be the guest of honour, officials said.

Some 310 soldiers will parade down the Champs Elysees on July 14 to the sound of Indian martial music played by a 90-member military band.
Prime Minister Manmohan Singh, who is currently in Italy for the G8 summit, was invited to attend the event as guest of honour by French President Nicolas Sarkozy, who attended India's Republic Day celebrations in January 2008.

"It is a proud day for India as our troops will march in a country where they fought during World War I," defence ministry spokesman Sitanshu Kar told AFP as the contingent left on board two Airbus planes sent by France.
Indian soldiers under British command were part of two Allied divisions that fought the Germans around the northern French town of Neuve-Chapelle in March 1915.

The France-bound soldiers, drawn from the army, navy and the airforce, said they had been practising since May for the 1.5-kilometre (one mile) parade.
"Our boys are all on cloud nine," said captain Vivek Khandoori. "I hope we get to practice at least once on the Champs Elysees.

"We are also looking forward to French wine," the 26-year-old captain added.
Only 21 soldiers in the contingent have travelled abroad before -- mainly on UN missions.

France, which last year backed New Delhi's quest for a global waiver on civilian nuclear commerce, is one of the key arms suppliers for India's technology-hungry military.
Click to expand...

This is a matter of great honour for Indian Army, as its troops has been invited for Republic Day Parade of Republic of France. French President and all other host of French Army concern's must definetly facinated by Indian Army's troop parade on the event of India's republic day parade. Well I never heard anything like this before, but this is certainly a matter of pride for entire Indian Nation. This will certainly raise moral of Indian army and all its entities as they are now even showcasing their Parade prowess in prominent European countries as a mark of tribute to all those Indian soldiers who fought bravely and sacrifice their lives during World War-II.

Our Media certainly need to telecast this Parade to showcase Indian Army's reach. 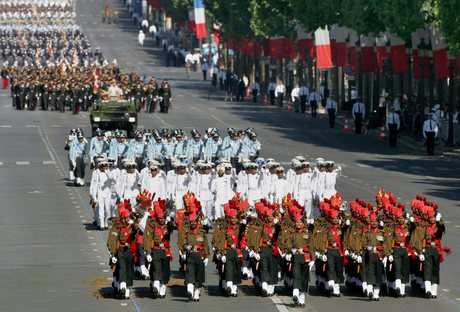 The two settled down next to each other to watch the start of the parade, an intricate cavalry manouvre set to music, and then a flypast of many planes from different eras made in France.

Behind Sarkozy and Manmohan Singh sat their spouses next to each other — both Carla Bruni and Gursharan Kaur in white, Kaur with her trademark string of pearls around her throat.

There was no mistaking the pride on Manmohan Singh's face as the contingents of the Indian Army, Navy and Air Force moved past the saluting base, the Army led by Capt Vivek Khanduri, the Air Force by Sqn Ldr Alok Sharma and the Navy by Comm Rajiv Sharma.

The Indians marched to the tune of "Haste Lushai" and "Kadam, kadam badhaye ja". They were followed by marching contingents of the French armed forces.

The Maratha Light Infantry is one of the oldest and most famous regiments of India, with its history going back 235 years. In the 18th and 19th centuries, the units of the regiment fought in several campaigns, including China, Burma, Africa and Abyssinia. It also fought during World War I and World War II.

A million Indian soldiers fought in World War I, including at two places in France — Somme and Givenchy. Around 100,000 Indians died in that war. More than 2.5 million Indians fought on the side of the Allies in World War II, apart from the country providing military bases and feeding a large percentage of Allied soldiers.

“I am delighted to be present today at the National Day Celebrations of France. The magnificent parade we have witnessed dramatises the strength and dynamism of this great nation. It was an honour for India to have a contingent representing all three services of our Armed Forces lead the parade. This reflects the friendship and strategic partnership between our two countries and the cordial ties between our Armed Forces.

July 14 is a date important not only for France. The French Revolution marked a defining moment in the world history when the aspirations of the common man began to acquire a central place in political and social life. The ideals of French revolution – liberty, equality and fraternity - helped to inspire our freedom struggle and guided the founding fathers of the Indian constitution. I am grateful to President Sarkozy for giving India a place of honour on this great occasion.

India–France relations and cooperation are growing in strength and vitality in all fields. We have a strategic partnership and have built vibrant political ties, with collaboration in energy, space research, defence, industry and commerce, science and technology, education, culture and tourism. It is my ardent wish that the partnership between our two democracies is further strengthened and deepened in the years to come. This will benefit the people of both our countries.”

Iam being honest,they don't come anywhere near as impressive as we have on the republic day.............Only the mademoiselles are hotter

Indian army marching in France soil, this image was there in my hard disk for a long time, thought of sharing with you folks...