I have gut feeling that Gujarat govt might end up in buying HAL LUH for it's police force.
W 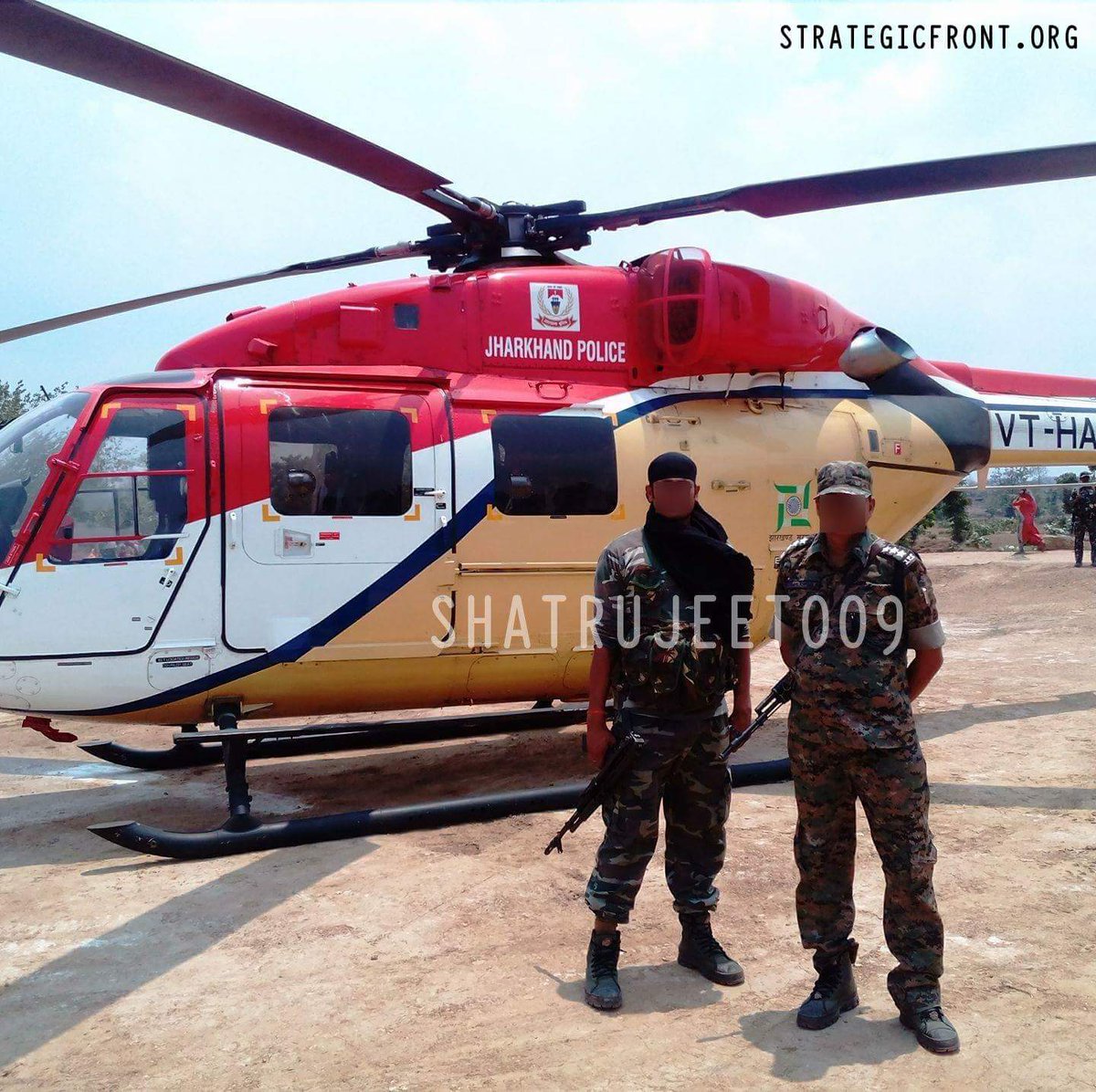 Shatrujeet According to old figures 2 Dhurvs ordered by Jharkhand Govt. HAL website claim 228 Dhruvs have been produced by march 2017 including 216 for Armed forces

Colossal waste of public money, unless it's for specific commissionerates of metropolitan cities (eg: Delhi Police, Mumbai Police, Bengaluru Police, etc.). In metros police choppers have actual utility where the police is trying to maintain visual over a car-chase, or objectives involving skyscrapers (none of which are possible in Indian cities anyway).

You can't even rappel down from an HAL Dhruv. At best it's a VVIP transporter.

If it's owned by the state police at large, it will simply become an air taxi for the DGP or state politicians, with no actual police use.

Indeed, I would rather Police forces buy more drones i.e quad copters. However, perhaps IAF can create a Police air wing with assets in every state, depending on state size, IAF can choose to base old Mi-8s, Dhruvs and LUH. 30 Old updated Mi-8s, 30-40 Dhruvs and an equal number in LUH is more than enough to take care of Police need across the country. These same assets can be used in emegencies, disaster response and relief ops.
S

The police in India can't even maintain their rifles and motor vehicles properly. How do you expect them to maintain helicopters? It is a scam in making.

I would rather suggest HAL Dhurv for Air Ambulance
W

The State Cabinet on Thursday decided to purchase the copters: one for the CM and another to operate in the Naxal-hit areas. The Cabinet also decided to donate an outdated Dauphin helicopter to an education institution since it had reached a point of ‘no repair’.

The Chief Minister had a narrow escape in July after his chopper took off unexpectedly. In May, Mr. Fadnavis had another scare when a chopper carrying him crash-landed in Latur with him and the staff still on board. Following media reports, the civil aviation department of the State sought a report from the pilots.

The government had recently hired two private aviation firms after the State’s own fleet was left unused for over four years. The State had then clarified that it did not have resources to maintain the aircraft or could find suitable pilots for its own fleet.

The fleet consists of four crafts: a Sikorsky, Beechcraft Super King Air 350, Citation Excel, and a Dauphin copter. Two of these are grounded due to technical issues and the other two have been involved in a series of accidents.

“We have decided to buy new copters since the existing fleet is beyond repair. We are using a borrowed craft from Pavan Hans company for the Naxal-hit areas, which is bleeding our finances,” said a senior official.

A tender will be floated soon after technicalities are sorted out. “This puts us in a better position since at least we are not paying huge rents, and soon can have our own fleet,” said the official.
http://www.thehindu.com/news/cities/mumbai/govt-to-buy-two-choppers/article19638965.ece

In a bid to provide an edge to anti-Naxalite operations, Maharashtra Government has decided to procure an Airbus H145 helicopter from Airbus Helicopters’ Donauwörth facility in Germany. The cost of the helicopter will be around Rs 72.43 crore in Indian curerncy. The helicopter will be parked at Nagpur. The Government was giving a thought to purchasing a new helicopter for anti-Naxalite operations for past some time. In September 2017, State Cabinet cleared a proposal in this regard. Accordingly, a global tender was floated on January 24, 2018. The technical bids were opened in a meeting of technical committee held on February 17. Later, on February 20, financial bids were opened. Based on the report of the technical committee, the financial bids were placed before an empowered committee headed by the then Chief Secretary on April 6.

After studying the bids, the empowered committee decided to procure Airbus H145 helicopter. The said helicopter will be parked at Nagpur, and used for multiple roles in Gadchiroli. The rotorcraft will be used for anti-Naxalite operations, transporting officials and personnel between Nagpur and Gadchiroli, to evacuate injured police personnel in case of medical emergency etc. Based on the empowered committee’s decision, General Administration Department issued a communication on Tuesday regarding procurement of the helicopter with tools.


Of the total cost of the helicopter, Rs 14.49 crore will be paid in the current financial year.
The provision for remaining amount of Rs 57.94 crore will be made through supplementary demand during the monsoon session of State Legislature to be held in July 2018.


The helicopter will provide an edge to the anti-Naxalite operations of Gadchiroli Police.
As per the Airbus’ website, Airbus H145 helicopter has ‘flexibility for a full range of applications, accommodating up to 8 passengers in standard configuration and 10 passengers in a higher density configuration, plus one or two pilots’.


The said rotorcraft can be ‘tailored for emergency medical services and law enforcement duties’, along with aerial work, and passenger transport. The H145 family of helicopters (BK117, EC145 and H145) has close to 1,300 helicopters in service around the world and has clocked in approximately 5 million flight hours.
As far as Donauwörth is concerned, it is Airbus Helicopters’ main site in Germany and its second largest worldwide. The facility designs, manufactures, and sells H135 and H145 rotorcraft at Donauwörth.
http://thehitavada.com/Encyc/2018/5...irbus-H145-helicopter-for-anti-Naxal-ops.aspx
W

A Sikorsky S76-D from US firm Lockheed Martin will be used for VIP movement, while an Airbus H145 will carry security forces and ensure medical assistance to them.

The development comes after 40 ultras were killed in Gadchiroli.

The state government on Tuesday sanctioned the amount for making payments in two installments.

The state cabinet had cleared the proposal to buy new choppers on September 7 last year. An empowered committee headed by the then chief secretary Sumit Mullick approved the purchase after studying technical and financial bids in April.

According to the government resolutions (GR) issued by the general administration department on Tuesday, of the total amount of ₹199.54 crore, 20% (₹39.89 crore) will be paid in advance and the rest will in July.

The state government decided to buy Sikorsky S76-D helicopter following crash landing of its chopper Sikorsky S-76C++ in Latur in May last year. The Sikorsky S-76C++ was carrying chief minister Devendra Fadnavis and five others who escaped miraculously despite substantial damage to the chopper.

Currently, the state government owns two helicopters and two aircraft. Of the two, the S76C++ was in service, while another, Dauphin AS 365 N-3 flew till 2011 and was grounded for want of repairs. The latter was bought at ₹23 crore in 2001.

Of the two aircraft, the Cessna Citation 560XLS was bought in 2013 and is in service, while the Superking AB 300 has been grounded after 11 years.
https://www.hindustantimes.com/mumb...-operations/story-cw6Yzmxe9xzIjOLgKTgRGK.html
W

I am going to post lots number of pictures of Euro copter H 145 helicopter today evening or tomorrow morning. I am happy finally Maharashtra police getting helicopter. But slightly disappointed that Mumbai police did not get helicopter.
W

The state government owned one old Dauphin N 3 which was replaced with Sikorsy S 76 after the crash that killed AP Chief Minister Y S Rajasekhara Reddy.

Now, one helicopter will be used for VVIP operations like CM Devendra Fadnavis and Governor Ch Vidaysagar Rao’s transportation, the second one will be used for anti-naxal operations and Force one. Both helicopters will cost Rs 150 crore and it will take nearly one and half years to arrive in Mumbai.

After the crash at Latur, CM Fadnavis luckily survived another accident at Pen in Raigad. The state government now charters a helicopter for him.

In the fixed wing category, the government has Cessna Citation XLS aircraft bought in 2008. Dauphin has not been utilised since 2011 due to the changes in the Director General of Civil Aviation guidelines for the VVIP flying. The government wanted to sell it, but could not find appropriate buyers.

After many attempts to either upgrade or dispose the chopper and aircraft grounded for years due to various reasons, the government has now decided to donate Dauphin to aviation training institute as an upgrade could cost nearly Rs 30 crore.

At present, the government has been spending about Rs 20 crore annually to hire helicopters for naxal affected areas of Vidarbha.
https://mumbaimirror.indiatimes.com...-two-new-helicopters/articleshow/60413840.cms
W

Delhi Police to monitor traffic using helicopters. No plans to acquire them as of now but to use hired helicopters.
W