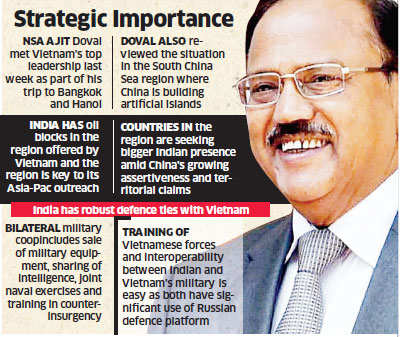 NEW DELHI: Adding teeth to its Act East Policy, India could train intelligence officials from Vietnam besides providing more training slots to the Navy and Air Force personnel from the Southeast Asian country. India may also provide military and defence technology, besides providing support for effectively countering cybercrimes as requested by Vietnam, according to officials privy to National Security Adviser Ajit Doval's discussions with the country's top leadership on Friday last week. Doval met Vietnam's Prime Minister Nguyen Tan Dung, and Deputy Prime Minister and Foreign Minister Pham Binh Minh, in Hanoi as part of his trip to Bangkok and Hanoi to firm up strategic partnerships.

The request for training of Vietnamese intelligence officials and increasing training slots for its Naval and Air Force personnel came from PM Dung, officials said. The NSA is understood to have expressed India's willingness to assist Vietnam's military and security apparatus. In an indirect reference to China, Doval stated that India was against any unilateral action to change status quo in the seas of the region and called for freedom of navigation, officials said.

The NSA reviewed the situation in the South China Sea region where China is building artificial islands. India has oil blocks in the region offered by Vietnam and the region is key to its Asia-Pacific outreach. Vietnam has been welcoming Indian naval ships in its region. Countries in the region are seeking bigger Indian presence amid China's growing assertiveness and territorial claims.

India is also worried China's phenomenal rise and its growing presence in the Indian Ocean Region. India has been asking for freedom of navigation in seas and recently the NSA expressed worries over Chinese military bases in the region.

India has robust defence ties with Vietnam. Bilateral military cooperation includes sale of military equipment, sharing of intelligence, joint naval exercises and training in counterinsurgency and jungle warfare. When Dung visited India last October, Prime Minister Narendra Modi had said in a press statement, "Our defence cooperation with Vietnam is among our most important ones. India remains committed to the modernisation of Vietnam's defence and security forces. This will include expansion of our training programme, which is already very substantial, joint-exercises and cooperation in defence equipment." The PM had added that India would quickly operationalise the $100 million Line of Credit that will enable Vietnam to acquire naval vessels from India.

India is being serious to interact with Asian countries and help them.

Thank heavens we are moving away from the namby pamby attitude of the UPA Govt.

I suggest I.K. Gujral be bought back from the dead to train vietnam intelligence forces.

The Indian Air Force’s (IAF) chief marshall, Arup Raha, arrived in Vietnam on Thursday, where he was received by Vietnam’s minister of defense, General Phùng Quang Thanh. Raha is in Vietnam for a three-day visit where he will meet with a range of senior Vietnamese defense officials and discuss military cooperation between the two countries. Raha’s visit emphasizes the ongoing strategic convergence between Hanoi and New Delhi. Both India and Vietnam have expanded their defense cooperation in recent months, with high-level discussions about security cooperation becoming relatively routine.

Thanh, according to a report in Vietnam’s Tuoi Tre, “hailed Raha’s visit, considering it a boost to the traditional friendship, mutual understanding and trust between the two countries and peoples, particularly in defense ties.” To date, India and Vietnam haven’t focused specifically on air force cooperation, preferring instead to build their security ties around maritime security. The specifics of Raha’s agenda in Hanoi remain obscure for the moment. In broad terms, Vietnamese reports notes that the Indian air chief’s agenda will be broad enough to address strategic security cooperation between the two countries.

In under a year, India and Vietnam have generated considerable energy in moving their strategic partnership forward. Part of this is due to Hanoi’s growing perceptions of a threat from China after last summer’s oil rig stand-off in the South China Sea. As of 2015, Vietnam is also the country coordinator for relations between the Association of Southeast Asian Nations (ASEAN) and India, a position it will hold for three years, up to 2018 (Carl Thayer has discussed that in more detail in The Diplomat, here). For New Delhi, Vietnam has always been an important node in the country’s long-stated “Look East” policy, which the new Indian government has recast as as the more energetic “Act East” policy.

As I wrote in these pages in May, General Thanh visited India for three days. His time in New Delhi was productive, resulting in a range of memorandums of understanding (MoU) between the two countries. Thanh’s time meeting with Indian officials, including his counterpart, Indian Defense Minister Manohar Parrikar, was focused on maritime security in particular. Thanh’s trip resulted in a Joint Vision Statement, which set out a road map for Indo-Vietnamese cooperation on defense cooperation. Thanh and Parrikar signed an MoU on defense and another on coast guard cooperation. Thanh’s visit carried on the momentum generated during Vietnamese Prime Minister Nguyen Tan Dung’s October 2014 visit to India. During that visit, New Delhi agreed to supply four patrol vessels to Vietnam (incidentally mirroring similar initiatives to bolster Vietnamese maritime security by Vietnam and the United States).