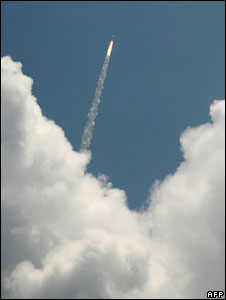 India will soon launch an advanced communications satellite, put into orbit for the first time by a cryogenic engine developed by its own scientists.

Cryogenic engines are rocket motors designed for fuels that have to be held at very low temperatures to be liquid. They would otherwise be gas.

Officials say that only five countries in the world have this technology.

Our correspondent says handling supercold (croygenic) propellants is not easy and the announcement of next week's launch is a significant development for India as an emerging space power.

He said the rocket would send a heavy communications satellite into space on 15 April from the country's launch pad at Sriharikota in eastern India.

Dr Radhakrishnan told reporters in Banglalore that the technology was home grown because "one country stopped another country in giving this technology to India".

India began developing cryogenic technology after Russia reneged on a deal to supply cryogenic engines in 1993 - following pressure from the United States, which believed India was using the technology to power missiles.

"The best reply is to... build your own technology," Dr Radhakrishnan said.

India has been using Russian engines to launch heavier satellites into space for some time.
It joins the US, Russia, Japan and China in having developed cryogenic engines.

India hopes to emerge as a global player in the multi-billion dollar satellite launch market.