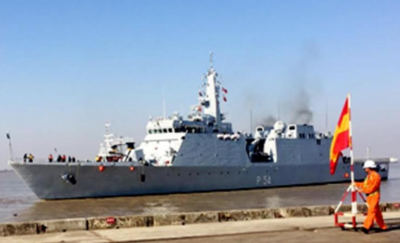 (File photo of an Indian warship in Myanmar)
NEW DELHI: Steadily cranking up military ties with Myanmar as part of the overall policy to counter China's strategic inroads in the region, India is now also going to export lightweight torpedoes to the country.

The export documents for the $37.9 million deal with Myanmar for the indigenously developed torpedoes, in turn, were presented to finance-cum-defence minister Arun Jaitley at function here on Friday.

DRDO chief S Christopher said the export of the light-weight torpedoes, which have been developed by his organization and are produced by defence PSU Bharat Dynamics and engineering giant L&T, would follow the earlier supply of naval sonars, acoustic domes and directing gear to Myanmar.

Indian Army, on its part, is also stepping-up coordinated patrolling with Myanmarese forces along the porous 1,643-km bilateral land border to turn the heat on Indian insurgent groups operating in the region.
India is keen that Myanmar undertake sustained operations against militant groups like the NSCN (Khaplang), ULFA, United National Liberation Front (UNLF), People's Liberation Army (PLA), Kannglei Yawol Kanna Lup (KYKL) and Kangleipak Communist Party (KCP), who for long have had bases in the thick jungles along the international border.

In June 2015, Indian para-commandos had conducted a "successful" cross-border raid against two insurgent camps inside Myanmar after 18 Indian soldiers were killed in an ambush in the Chandel district of Manipur.