Cyber security seminar along side Pakistanis

Note, I as a Modi admirer.. Everything will be maaf if Russia invades Ukraine.. If in some way, Modi had got confirmed info that Russia would invade Ukraine, then, with the west completely distracted.. Modi would want the internal situation to be completely under control, if China-Pak axis try anything naughty...
I know this sounds like high grade copium.. But, still..

There is so much to reclaim and never buy good mooslame horseshiet.

BROTHA THE POPULATION OF PAKISTAN IS SO RADICALISED, THAT ONLY WAY TO GET RID OF THEM IS THAT CHINA OVERTAKES PAKISTAN

In that karachi the Hindu population was 46% while that slave cuckverts at 47% approx. In four of Sindhs five largest cities Hindus were an absolute majority.
Last edited: Dec 7, 2021

THESIS THORON said:
BROTHA THE POPULATION OF PAKISTAN IS SO RADICALISED, THAT ONLY WAY TO GET RID OF THEM IS THAT CHINA OVERTAKES PAKISTAN

Sindhu Jal Sandhi ko turant scrap kar dena chahiye. Sindhu is our river and a lot of water has flowed since. Article 370 is obiliterated our next natural step need to be at securing our mother rivers - Sindhu.
S

asaffronladoftherisingsun said:
Sindhu Jal Sandhi ko turant scrap kar dena chahiye. Sindhu is our river and a lot of water has flowed since. Article 370 is obiliterated our next natural step need to be at securing our mother rivers - Sindhu.
Click to expand...

From the western rivers of the Indus system, hardly any water flows to Pakistan.. India has almost fully utilized them..
Eastern rivers, India is only capable of diverting and using the waters, to a limited extent.. Stopping the water flow of the eastern rivers in the high Himalayas, is not possible, without triggering extreme flooding in India

Encounter has started at Check Cholan area of #Shopian.

NEW DELHI: The Army on Tuesday conducted a helicopter-borne exercise in the higher reaches of the Kashmir Valley to practice inserting a task force “behind enemy lines in an intense air defence and electronic warfare-operating environment”.
The exercise saw the task force, which included infantry soldiers, special forces and marine commandos, being airdropped in a snow-clad region at an altitude of over 9,000 feet.
“The exercise included transport and armed helicopters of the Army and IAF, including the latest Apache attack-choppers. Different aspects of electronic warfare were also validated in the exercise,” an officer said. 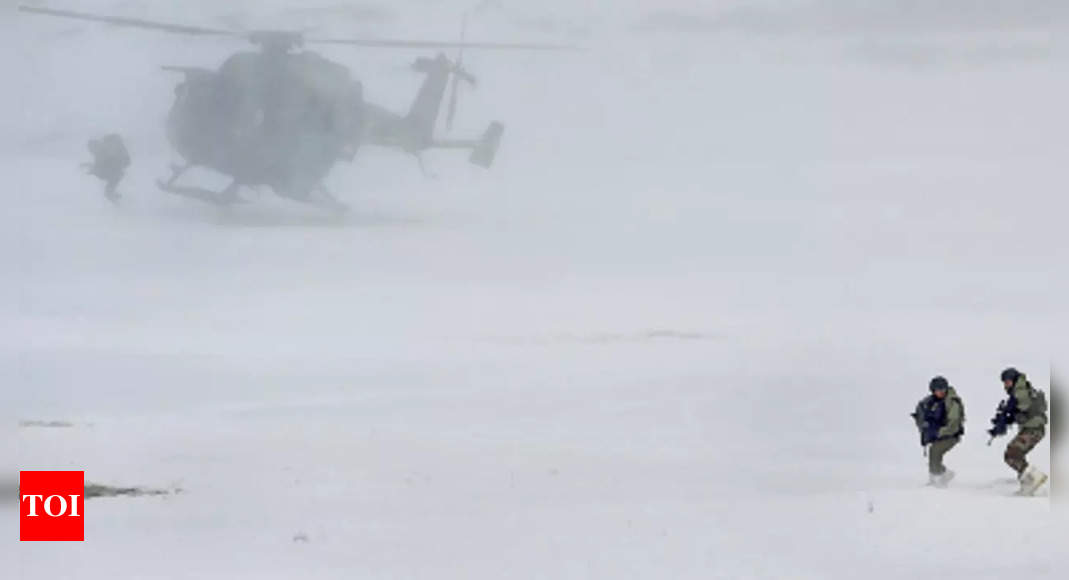 India News: The Army on Tuesday conducted a helicopter-borne exercise in the higher reaches of the Kashmir Valley to practice inserting a task force “behind enem

Automatic Kalashnikov said:
Ani saying his family was on board as well. And the crash looks terrible, but I hope all survive. There isn't any official statement as of now
Click to expand...

Then why is XRSam saying he is dead?

We should use this opportunity to engage more with the Arabs.

UAE has already taken a more benign approach towards Indian culture (the BAPS temple recently is an example). They are also moving their weekend from Fridays to Saturdays+Sundays (though with time dedicated for Friday prayers). This is a good thing. UAE is becoming a commercial country and leading the way ahead. Saudi under MBS might go the same way (at this rate, we will be able to see Saudi women running around in bikinis soon

), looking at the writing on the wall that in 30 years from now, they will be nowhere and we will be a serious world power.

Modi Ji is also leaving no stones unturned to ensure that our security ties also elevate with them.

Till Arabs control Medina & Mecca, Muslims around the world will follow them. The Pakistan-Turkey-Malaysia nexus is already broken. Malaysia has mellowed down with us & is trying to get defence contracts with us, Pakistan is down the toilet anyway & Turkey is racing to join them. Erdogan is fighting 4 low-intensity conflicts around his neighbourhood including 2 inside Syria, 1 inside his own borders against the PKK and simultaneously there are talks of further engagement in Afghanistan, Somalia and the Azerbaijan border (manning Azer-Armenian border with Turkish forces).

Pakistan is a spent force. The Army should direct all CT forces against Pakistan with older air assets stationed on their side while putting everything else on the Indo-Tibetan border.

Pakistanis celebrating the news of CDS General Bipin Rawat's death is like a man about to be executed feeling thrilled that the executioner has died. Another executioner will come and complete the job of slaughtering Pakistanis. Noose around Pakistan's neck is tightening, and another CDS will be appointed soon.

Sir pe tapla said:
He has unique view points that's for sure. We should not judge so quickly.
Click to expand...


He also doesn't claim that Sikhism is abrahamic. He calls it 'Syncretic'.