Though the traditions of IA is for officers to lead from the front, as has been for a long time; but its time they let it go.

In our current scenario, we are already short of officers. The officers: jawan ratio is abysmal.

The promotion policy of IA is such that no jawan can rise to the level of a Captain. Also, as of now there are only three institutes which can train an officer: IMA,NDA and OTA. The amount of money invested in training and educating an officer is huge, compared to what they spend per jawan. Hence the officers are a prized assest of IA.

In order to keep up its traditions, we are losing many officers to COIN operations in J&K and NE. IMHO, experienced jawans should lead the operations.
T

Skull looks like it has been crushed vs a clean bullet wound or a bullet induced ripoff. What was he struck by?

Generally not the type of terrorist we see (teenagers or in mid-20s), heavily armed and equipped with grenades, IEDs, medicines, and food supplies.

It is possible this person is a local PoK guide (who infiltrates terrorists) caught in cross-fire. The Darra-made local AK-47 also shows a low budget.
Click to expand...

He was ex porki army soldier.
Quiet common in porkistan most of their ex soldiers join terrorist organization

FalconSlayers said:
Bruh straight up badass, Sigma rule: if terrorists use IEDs on you, use IEDs on them.

Who said BJP is not secular?... This guy is literally getting an award for his act: "Gaushala" ko udda diya

(blowing up the Cow shed)

iNorthernerOn9 said:
Who said BJP is not secular?... This guy is literally getting an award for his act: "Gaushala" ko udda diya

(blowing up the Cow shed)

The cows were shielding the tango hence , they were bound to go. As they were accomplice in terror
We only have responsibility to hindu animals .

@Hariharan_kalarikkal
Lo brother , your haci was some ssg commando

Two ter0rists of HM arrested by joint team of Police and Security Forces in #Awantipora, J&K.

Incriminating material, ammunition including 383 rounds of AK-47 recovered from their possession

Her Modus operandi during Kargil war was also the same.

Because of hafiz saeed ki dulhan (b dutt) moshe parents were killed by terrorists during mumbai attack.
She was the one who should be held responsible for his parents murder.
She not only aided in kargil war but also in pathankot attack.
She even did a show of how to travel from border to pathankot air base few months before attack
Last edited: Nov 27, 2021

Tshering22 said:
How difficult is it to reach this filth? Since the government won't touch her and all, do you think that some pissed-off common Indian who has lost a soldier brother/father/nephew/son, etc. would be able to get rid of her?
Click to expand...

RW has made her fairly irrelevant today. Eliminating such scums would make them martyrs, better to ensure that they are cut off from every place and event of relevance. How did she used to get the access to military bases, Operational areas and other places of strategic importance? Ensure that none of her jaatwaalas ever reach there. No point in wasting the good political capital on such turds, you'll only have a barrage of NYT, Daily Mail, CNN, BBC reports and gora chamdis' "concern" to deal with, all for what- an obscure reporter whose viewership is only a few elite in the cities
R

Today is the day when Lachit Barphukan, the Legendary Commander of Assam beat the shiet out of mooghals and made them retreat from Assam. Assam under Ahoms never fell to pedophile desert cultist. They had hang the inbreds head high on the trees everytime coomers attempted dawah. Ahoms ruled over huge territory for full 600 years. The legendary tribes of BHARATVARSH to have annihilated mooghals 17 times that is exactly why marxshiet did not tell you about them.The first apparent signs of VEDIC DHARMIC influence on Ahoms were seen when Sudangpha was crowned King in 1397 they were staunch Shaiv Vaishnavs and Shakti Schools of DHARMA. The splendiferous Ahoms that made mooghalcucks and aurangzeb shiet from all holes. 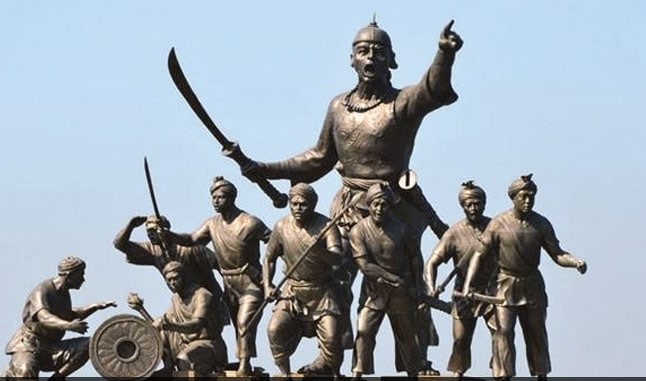