FalconSlayers said:
I don’t think so USA will be this stupid to have a base in India, afterall we’ll be the largest user of S-400 in the world outside Russia.
Click to expand...

Even if USA is allowed to have base inside India, It will be only Indian troops who will do the donkey's work.

Jusk ask any ANDSF soldier how US cocooned themselves to its bases inside Afghanistan, while they were the only ones who were spilling blood against Taliban.

Yankees are not a formidable fighting force anymore, their top tier leadership is only good at cutting deals with its adversaries and hence erecting a middle ground to leave its partners in a lurch if things went south for them.

Jimih said:
their top tier leadership is only good at cutting deals with its adversaries and hence erecting a middle ground to leave its partners in a lurch if things went south for them.
Click to expand...

Meanwhile PeeDF busy discussing how to do genocide in Waziristan

Poseidon said:
Meanwhile PeeDF busy discussing how to do genocide in Waziristan
Click to expand...

Haha reading the same, one is saying daily curfews and no internet, same if India does in J&K it becomes hooman ryts issue but if dil dil porkistan does it is counter terror operation.

Jimih said:
So it means that India is not able to retrieve Pok and PoGB by itself and it will need some foreign intervention.

Than we should stop calling ourself the '2nd largest active military in the world', and change the slogan "Atmanirbhar Bharat" to "Sab pe nirbhar Bharat".

The problem with Indians nowdays is that they themselves are outsourced to do other's work, so why not India outsource its internal security to some other Nation?, "Outsource" is the key word here. We Indians are so used to the term.

What US is trying to do is to hyphenate India and Pakistan and with Beijing Biden in White House no action against China is possible.
Click to expand...

Well..you can retrieve occupied J&K in 2 ways:
1. Disintegrate porkiland due to catastrophic economic failure caused by US working with India to strangle Pakistani trade - their major exports are to the US despite all the rhetoric around deeper than the ocean friend. And then we walk in and take what we want.
2. Go for an all out war at risk of significant casualties; and a prolonged expense of holding territory as the PoJK‘s demographically altered population maybe hostile to us.

I think for us to retrieve PoJK, Pakshitstan must Balkanize first. And this requires a play where we need to degrade Ching chong- paki alliance. And this would require US support. The US would also be threatened by PLA naval play in Gwadar which is a threat to the US’ gulf bases.
The wild card in all this is India. If we grow our economy quickly to $10 trillion then the entire strategic landscape changes for us. We can enforce an economic blockade on porkis all by ourselves, with no pushback from the international community. If the gap between us and China widens, and we are stuck in lower middle income, we would be more dependent on the US to achieve our goals of degrading porki-chini beghairat bhaichara.
I don’t think GoI will play the take PoJK via a war of attrition card. Economic strangulation and disintegration of porkiland is what might be on the cards, with the US taking control of Porki nuclear assets.
One thing about the US though is they could quickly align with China again if the chingchongs start to pander even a little bit to the US concerns. This again will completely change the global strategy.
The US - India partnership continues to be a mystery with no clear agenda and what each party would do. For instance, the US has clearly said they are not in favor of giving India an advantageous trade deal. Neither have they really accelerated any joint R&D projects.
‘The issue with the US is it cannot be trusted as a reliable ally. This is why we have to watch exactly what the US does and not what the US says.

Jimih said:
Staging ground? Any staging ground inside India will have to use Paki airspace.

Why not use Aircraft carriers or Bases in ME?

FalconSlayers said:
Chill guys, America has asked us for bases for many years, our answer has always been a middle finger.
Click to expand...

kaaleshwaar said:
Only condition for Bases should be non interference and support in GB take over and complete cutting of ties with Porkis
Click to expand...

Nope that's not gonna happen, Yankees are known to be baxtards of first order, they would always back stab you, they want bases in western India only to save Pakistan so that they can keep india in check, a strong India is not favor of either us or russia, once they set foot on india , they wod never leave,

Insights from Shyamsundar from BRF are mostly intune with current affairs. His warnings are better not to be ignored.

Poseidon said:
Meanwhile PeeDF busy discussing how to do genocide in Waziristan
Click to expand...

You know what , the alqaeda said about kashmir surriye Xinjiang ( kashgar ) and guess what waziristan also
P

Jimih said:
Insights from Shyamsundar from BRF are mostly intune with current affairs. His warnings are better not to be ignored.
Click to expand...

The have prepared a Kill List of EX Service men , because Serving officers have Security

Jimih said:
Staging ground? Any staging ground inside India will have to use Paki airspace.

Why not use Aircraft carriers or Bases in ME?

If it was a congress govt, i would have laughed it off but since we have nehru 2.0 at the realm.. If this happens, not only India will be seen as a client state but it will increase paki influence in US through us.

Anandhu Krishna said:
If it was a congress govt, i would have laughed it off but since we have nehru 2.0 at the realm.. If this happens, not only India will be seen as a client state but it will increase paki influence in US through us.
Click to expand...

Thats what i said, except chacha nobody else was spineless as far as usa is concerned.

And execpt chacha nobody openly asked for amriki help, neither his daughter nor his grandson while mudi ji is courting usa too much, most probably he was deeply disturbed after his entry was banned in usa
S

No way porkies gonna get away after doing a 26/11 this time. Just no way. Say what you will about BJP, but they do give free hand to forces. Myanmar surgical strikes , Balakot airstrikes, Uri surgical strikes. People kept saying nothing will happen after attack on Indian forces but response was given eventually. Maybe not at the scale one would have wanted but still it was something.

A 26/11 attack, committed in mainland India, on Civilians, would prove to be fatal for Pakistan. That I have no doubt. This is not congress era.

Knowitall said:
Anything even close to a repeat of 26/11 must be answered by total war.

Every man women and child should be inducted with the sole purpose of wiping pakistan of the map. Every single factory should churn out guns and evey single able bodied men should either be in the factory or the field.

Thousands of men should continue to pour into pakistan everyday till they surrender. Their should be no repeat of 93,000 captures. Every single soldier PA soldier should be slaughtered on sight.

The horrors and suffering we as a nation faced during 26/11 is something we will never forget. If they wish to do a repeat of it they should prepare themselves for the worst.
Click to expand...

If Complete slaughter of Pakis is what you need, there's a way without risking total war and perhaps even a single Indian life 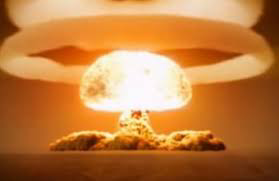 For this to play out like we want it to play out, any kind of second strike capability of Pakiland should be neutralised


If it indeed happens, I'm giving out free Laddus and Ghee Kheer to all DFI members

Damm i am loving it man!! Porkis getting banged without any respite...

It gives me extreme solace to see pakis blood being drawn in their own soil..

These piggies were going gung ho with their death with thousand cuts policy against india..

Now look what.. looks like their neck is against the sword executing an agonisingly slow decapitation..

Instead of Balochistan.. Waziristan will be the death kneel on pakjabi army..
Last edited: Sep 15, 2021
You must log in or register to reply here.
Similar threads
India Pakistan conflict along LoC and counter terrorist operations
Pakistan Accuses India of shifting conflict to sub conventional level
US Calls For Improvement in India-Pakistan Ties, Says A Conflict Could Spark Nuclear War
The Root Of India-Pakistan Conflicts
Share:
Facebook Twitter Reddit WhatsApp Link