Bhumihar said:
Aren't you the one simping for Ukrops grilz in discord

dont expose me on here

So he too believed this theory

India captured Anzbari Complex, along with Point 5770, during the Kargil war. 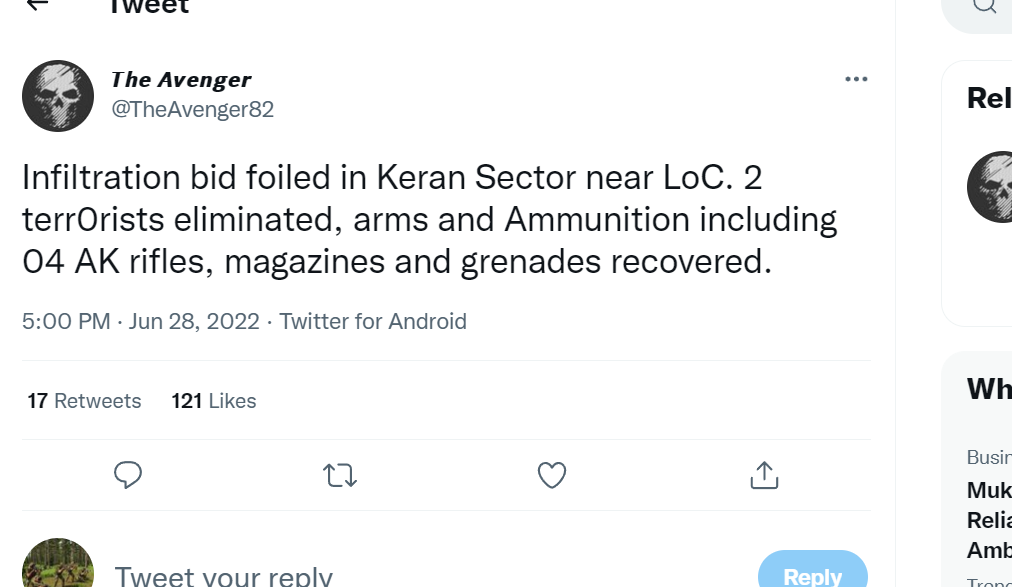 I posted this above, mate.

One of them was a modi fan

Hope we got a plaque with a quote from the Holy Rig Ved in return.

Should have given them a Buddha statue
T

Though not directly related to this thread, an very important development.
As everyone would have read or seen on TV, an unfortunate crime took place in Rajasthan. An innocent Hindu tailor has been beheaded by two rabid fanatical Muslims. Over an social media post supporting Nupur Sharma. Probably members of an extremist fundamentalist organisation.

Not trying to incite communal passions but only highlighting an atrocity.

Something like this could have happened in Taliban Afghanistan but in India?.

The main perpetrators have been apprehended as per latest reports.

We could not prevent it, but at least we can decide the outcome.

After fully investigating and unearthing the conspiracy(if others are involved and who motivated or instigated the perpetrators) the two main criminals should be killed in an encounter. No lengthy trials. They deserve the punishment. Should set an example for others even remotely thinking about repeating the act elsewhere.

Agree it might be extra judicial justice. But hell, we need to create fear in other potential extremists that Hindustan will not forgive such brutality and instant justice will be delivered.

Though nobody will certify, such unfortunate encounter killings by the police have happened before. Not the first time.

Some people doubtlessly will disagree and ask for an fair trial where the case drags on for years. Do the perpetrators really deserve an free and fair lengthy trial.
M

1 suar killed in Kulgam.
A

How many DFIans were believing this jumla?

It was only for capturing followers on twitter from that platinumjab guy.

It should be taken only on entertainment value.

It was only for capturing followers on twitter from that platinumjab guy.

It should be taken only on entertainment value.
Click to expand...

Exactly
Seriously speaking I took a lot of fun
M

Can't wait for the day we get to do this in the streets of Mirpur and Karachi.
You must log in or register to reply here.
Similar threads
India Pakistan conflict along LoC and counter terrorist operations
Pakistan Accuses India of shifting conflict to sub conventional level
US Calls For Improvement in India-Pakistan Ties, Says A Conflict Could Spark Nuclear War
The Root Of India-Pakistan Conflicts
Share:
Facebook Twitter Reddit WhatsApp Link