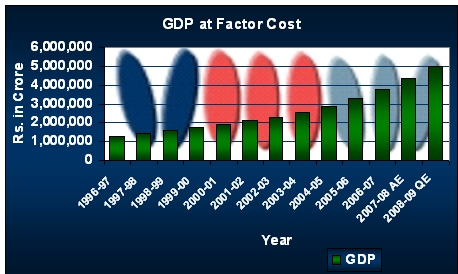 The numbers are impressive - per capita GDP has more than doubled from Rs 15,625 in 2000 to Rs 37,490 in 2009, foreign exchange reserves have risen nine-fold from $34 billion to $286 billion in the same period, and the Bombay Stock Exchange's market capitalisation has soared from $184 billion to over $1.2 trillion. But the figures still don't truly reflect the Indian economy's triumphant march through this decade, or the intimidating aura that Indian business is increasingly acquiring in western eyes. To get a sense of that, rewind to a recent interview which appeared in TOI-Crest , in which trendspotter Malcolm Gladwell was asked if he had a message for Indians. His response: "One day, all of us in the US will be working for you. Be kind to us." Sure, it was a joke. But it also contained a kernel of truth. Thousands of Americans and foreigners of other nationalities already work in companies owned by Indians. If the 1990s was when India let in the world, the Noughties is when it went out to the world - and increasingly did so as a conquering force.

Big-ticket acquisitions made headlines - the Tatas acquiring Corus and Jaguar Land Rover, the Aditya Birla Group buying Novelis, ONGC Videsh taking over Imperial Energy, Videocon picking up Daewoo Electronics. But away from the spotlight, many smaller companies too were planting thetricolour on corporate headquarters around the globe, with Indian companies acquiring 828 foreign firms between 2005 and 2009 alone. The term 'Indian multinational' is no longer an oxymoron, and Tata Group chairman Ratan Tata recently said his successor could well be an expatriate - after all, 65 per cent of the group's $71 billion revenue now comes from overseas operations.

While India Inc was going global, the domestic economy was going from strength to strength. After growing a strong 6.4 per cent in 1999-2000 , it weathered a rough couple of years, but picked up pace from 2003-04 (8.5 per cent) and really accelerated from 2005-06 , posting 9.5 per cent, 9.7 per cent and 9 per cent in three straight years of China-like growth. The global recession slowed down GDP growth in 2008-09 to an estimated 6.7 per cent, and there was talk of it slipping below 6 per cent this year, but an eye-popping 7.9 per cent spurt in the July-September quarter has led the finance ministry to estimate 7.75 per cent growth for this fiscal - a figure the developed world can only sigh about wistfully.

Once, India feared globalisation . Today, World Bank president Robert Zoellick, among others, describes India as a crucial pillar in an interconnected world. The future seems bright - according to several projections, India will overtake China as the world's fastest-growing economy by 2020, and be the world's third largest economy by 2025. But as the rising Naxal menace shows, aspiration from rising growth can easily turn into frustration at exclusion from it. India has done a good job of wealth creation in this decade. It needs to get better at wealth distribution in the coming one.
-VIKAS SINGH 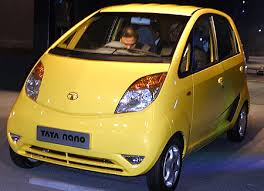 
They sniggered, they scoffed. They said it would be an auto-rickshaw on four wheels, or two motorcycles joined at the hip. But finally, as Ratan Tata drove out the Rs 1 lakh car on January 10, 2008 at the Delhi Auto Expo, jaws dropped, flashbulbs popped, and the sceptics were left eating huge helpings of crow. An Indian company had just produced the cheapest car ever made in the world. That's right, ever made. Adjusted for US dollar prices in 2007, the legendary Model T would have cost almost $20,000. The equally famous Beetle and Mini would have both come into household garages at upwards of $11,000. Tata's Nano, in contrast, began at a base price of about $2,500 - "the equivalent of a DVD player in a Lexus" , as Ashling O'Connor pointed out on the website of The Times, London.
Indeed, it would be fair to say that no madein-India industrial product has ever attracted the kind of global media attention the Nano received on its launch. The Economist called it "a product of impatience and chutzpah'' and Time dubbed it the "upstart econobox'' .

The global auto industry quickly took note. CEOs and other honchos of the world's top carmakers lined up to check out the Nano at the Geneva Motor Show. The India managing director of one of the world's biggest luxury carmakers made desperate efforts to procure a Nano for HQ at Germany, which wanted its engineering team to unravel how Tata Motors had managed to make a 623cc car that fulfilled all safety and emission norms, while staying within the Rs 1-lakh price that Ratan Tata had promised.

The Nano's true impact on the Tata bottomline won't become visible for a while - production at its Sanand plant will only kick off in right earnest next year. But the Nano has already had one major impact - catapulting Indian automobile engineering to global centrestage. Carlos Ghosn, boss of Renault/Nissan, quickly announced plans for a low-price car. In an acknowledgement of India's engineering and manufacturing prowess, he emphasised that this could only be done in India. And so, Renault/Nissan has tied up with Bajaj Auto to produce Ghosn's dream ultra low-cost car. Others soon joined the queue. Hyundai has also begun work on a low-cost car - and its R&D unit at Hyderabad is the lead development centre for the car. GM and Ford, too, are working on budget cars, with India forming an integral part of the projects. Now, when the world thinks small - cars, that is - it thinks India. That's saying a lot for Nano tech.
-PANKAJ DOVAL 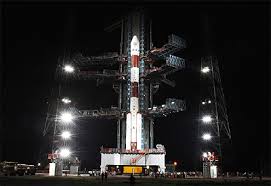 Sriharikota , October 22, 2008. 6.22 am. A brief moment in time, a giant leap for Indian science as the country launched its first unmanned scientific mission to the moon, Chandrayaan-1 . It was an impressive display of technological expertise , particularly because at Rs 386 crore, it came at about 20 per cent of the price anywhere else in the world. Suddenly, there was talk of Chandrayaan being the Nano of space exploration and India emerging as a global low-cost destination for satellite launches.

A lunar task force set up by former ISRO chief K Kasturirangan had stipulated that Chandrayaan-1 would be a two-year mission, with the primary objective of preparing a three-dimensional atlas of both the far and near side of the moon. It was also supposed to carry out chemical and mineralogical mapping of the lunar surface. When the mission was abruptly terminated on August 30, 2009, due to communication problems, it had already achieved 95 per cent of its stated objectives. Chandrayaan-1 carried 11 instruments - six from abroad (three from the European Space Agency, two of NASA and one from Bulgaria) and five from India. After lift-off on October 22, Chandrayaan-1 flew towards the moon in five stages and entered the lunar orbit on November 8, 2008. Almost 30 per cent of the moon missions of the US and the former Soviet Union had failed at this critical juncture.

A new milestone was achieved on November 14, when the 29-kg Moon Impact Probe (MIP), with the Indian tricolour painted on all its sides, detached from the main orbiter and crash-landed close to the Shackleton Crater in the south polar region of the moon. With this, India became the sixth member of the exclusive lunar club, joining the US, Russia, European Space Agency (17 nations), China and Japan. The idea of landing the MIP on the Moon's surface came from former President APJ Abdul Kalam, who argued that it would physically establish India's presence on the moon - and make it clear thatno single nation can claim the moon as its personal property.

Despite rigorous pre-launch tests, Chandrayaan-1 did not have a trouble-free flight. It faced heating problems, its two sensors developed serious snags and, on August 29, the spacecraft stopped communicating with the Indian Deep Space Network at Byalalu, near Bangalore. But the most exciting part of the mission, ironically , came after it was terminated. On September 25, 2009, G Madhavan Nair, the then ISRO chief, announced that it had discovered water molecules on the moon. The discovery was endorsed by two NASA spacecraft - the Cassini and Deep Impact. There have been 70 missions to the Moon. Previous NASA missions, Clementine and Lunar Prospector, had received only hints about the possibility of water existing on the moon. But, finally, it was NASA's moon mineralogy mapper (M3) on board Chandrayaan-1 , which traced water molecules on the lunar surface. The global scientific community was electrified by the finding. NASA held a press conference, which the world tuned into. Some of the finest scientific brains in America heaped praise upon Chandrayaan and ISRO. India was over the moon - and with good reason. This stunning success is spurring ISRO on. According to Chandrayaan project director Mylswamy Annadurai, scientific payloads for the Rs 425-crore Chandrayaan-2 , slated for launch in 2012-2013 , are being firmed up. An Indo-Russian joint venture, the mission will consist of a lander, which will make a soft landing on the moon, and two rovers, which will analyse the lunar soil and transmit data to the ground station via the main Chandrayaan-2 spacecraft.


What next? Well, around 2020, there is every possibility of India putting a man (or woman) on the moon. Ladies and gentlemen, fasten your seatbelts . India's space programme is taking off.