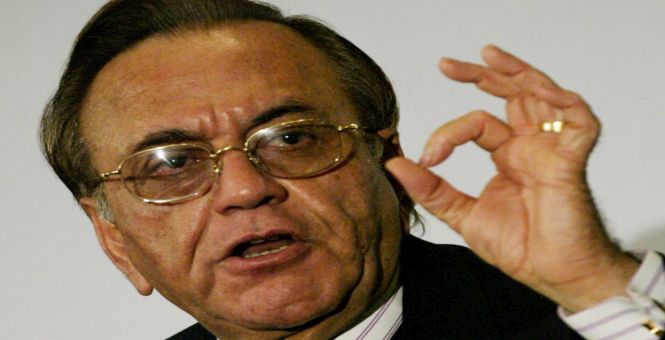 Former Pakistan Foreign Minister Khurshid Mahmood Kasuri
New Delhi: Former Pakistan foreign minister Khurshid Mahmood Kasuri on Monday claimed that a US delegation led by former US presidential candidate John McCain had met him in the aftermath of 26/11 terror attacks expressing apprehensions that India may carry out surgical air strikes at the headquarters of terror outfits JuD and LeT near Lahore.
Speaking to a television channel, Kasuri said the delegation which also included Republican Senator Lindsey Graham and Richard Holbrooke, US Special Representative for Afghanistan and Pakistan had visited Lahore.
"I was no longer Foreign Minister. I received a call from an American diplomat that so and so is coming. We would like you to talk to him first and then there would be a quite lunch," Kasuri said ahead of the launch of his book 'Neither A Hawk Nor A Dove' here this week.
Kasuri said they sought his opinion as a politician and someone who had headed the Foreign Office for five years on what would be the likely reaction of the Pakistan Army and the people at large if there was a limited Indian air raid on Muridke.
He quoted McCain as saying, "We have come from India where there is a lot of anger. Supposing there is limited strike on Muridke, the headquarters of JuD'."
According to Kasuri, he told McCain that the Pakistani army will give a "measured" response in case of a strike inside its territory. "I said what do you mean? He (McCain) said supposing there is an air strike. I said are you trying to prevent a war? He said we think that may well prevent a war. I said here is my honest opinion. Pakistan army will give a measured response, within five minutes. It will be measured, it will not go haywire. It will be measured, commensurate with the severity of the attack on Muridke.
"You give assurance that the Indian army will not react. And if they did, what would be Pakistan reaction? Everything could spiral out of control." Kasuri claimed he told them to ask the Pentagon to talk to Pakistani Army headquarters directly.
"They (the delegation) said we are asking you because you are a civilian and will know what will be the public response. I said public response will be so grave that Pakistan army will be delegitimising in the eyes of its own people if it does not respond," he said.
Asked if he got a feeling that the Americans were sounding Pakistan up, Kasuri said he was "absolutely certain" that they talked to "someone very high" in India. "And it was my advice to them that if they did that, there would be a reaction. There has been war gaming, I have been part of that. I gave them what I thought was the best advice. I felt that could actually lead to war although they thought that might prevent a war," Kasuri said.

Kitho ??? Video game me[emoji38][emoji38][emoji38] we did not have decent radars , air defence , fighters, we r short of tank and their ammo kitho karde attack[emoji38][emoji38][emoji38]
You must log in or register to reply here.
Similar threads
India may scrap 6.5 lakh Ak-203 rifle deal, and opt for SSS Defence's upcoming 7.62mm Ak type Rifle
India may become the first buyer of S-500 anti-aircraft missile system
COVID-19 vaccine may be ready by Dec, likely to be available in market by March 2021: Serum Institute of India
Report: India May Have Put Beijing Within Range of Its Nuclear Weapons
Share:
Facebook Twitter Reddit WhatsApp Link