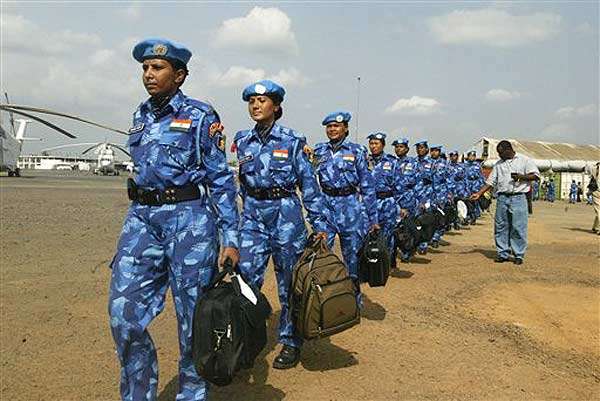 India which has contributed nearly 180,000 troops, the largest by any country, to the UN peacekeeping operations has been honoured for making significant contribution towards global peace and stability at the Capitol Hill here. The new Indian Ambassador to the US Arun K Singh received the award in recognition of India's commitment to peacekeeping at the event organised by Better World Campaign, The United Nations Association of the USA and the US-India Business Council. Multi-dimensional peacekeeping is a contemporary reality and there is a need to involve troop contributing countries in all aspects of mission planning, Singh said in his address. "The Security Council's mandates to UN peacekeeping operations therefore need to be rooted in ground realities and correlated with the resources provided for the peacekeeping operation," Singh said. "It is critical that troop and police contributing countries are fully involved at all stages and in all aspects of mission planning," he added.
India has contributed nearly 180,000 troops, the largest number from any country, participated in more than 44 missions out of the 69 UN peacekeeping operations mandated so far and 158 Indian peacekeepers have made the supreme sacrifice while serving in UN missions.
India has been among the largest troop contributors with around 8000 personnel deployed with 10 UN Peacekeeping Missions this year, including the first Female Formed Police Unit under the UN.

India should get out of this thankless job of UN peace keeping. India should send peace keepers to Europe and America, if there is a need. Soon there will be peace keepers need in Ukraine. Sending Indian troops to far away Africa is a thankless job. Nobody locally wants them and there is no need to put Indian lives in harms way in a bush and tribal warfare for the sake of decision makers of Europe and America in the UN Security Council.
You must log in or register to reply here.
Similar threads
India to be 'country of honour' at South Asia Expo in China
Fourth in India, Tripura Police gets president's honour
Pak war hero honoured at India's recommendation
Pak war hero honoured at India's recommendation
Share:
Facebook Twitter Reddit WhatsApp Link