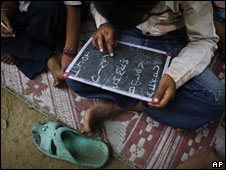 India is falling behind countries such as China in its attempts to increase the use of English among its population, a new report says.

The study by the British Council says a "huge shortage" of teachers and quality institutions is hampering India despite a growing demand for English skills.

The study says China may now have more people who speak English than India.

India's emergence as a major software and IT hub has in part been possible due to its English-educated workers.

The study, English Next India, by British author David Gradoll says English is a "casualty of wider problems in Indian education".

It says: "The rate of improvement in the English language skills of the Indian population is at present too slow to prevent India from falling behind other countries which have implemented the teaching of English in primary schools sooner, and more successfully.

"China may already have more people who speak English than India."

The report says India will need many more people speaking English to sustain its economic growth.

But the spread of the language, according to the report, is being hindered by a shortage of English language teaching in schools.

The report says Indian universities fall far short of rival countries in the quality of teaching and research, and "poor English is one of the causes".

Also, the report adds, it is "impossible" to improve standards of English without addressing the problem of "very low levels of academic achievement" of students studying in government and private schools.

The study says a range of approaches is required to improve English proficiency in India, and no single method will help.

English has been spoken in India from the days of colonial rule, but there are no precise estimates on how many Indians speak, read and write English.

One estimate suggests 333 million people in India "use English", but India's National Knowledge Commission says "even now, no more than 1% of our people use English as a second language, let alone a first language".

Considering the craze one witnesses here for getting Young kids admitted to English medium schools(i mean applying one year in advance for English medium play schools)the news perhaps is incredible.However if its true makes for excellent news
A

Congrats to BBC for one more incredible article in their long list of "spew at India no matter what sh*t it means".
V

A M J said:
Congrats to BBC for one more incredible article in their long list of "spew at India no matter what sh*t it means".
Click to expand...

Is it so meaningless? My mother wanted me to learn English back in the days of perestroika because she saw the country was opening up to the West. I have since had opportunities I never would have had otherwise. I take it is the same for most Indians. Why did you bother to learn if it is so useless?

I call that ours Kids are genius indeed. so much burden on then

well it was not a burden to learn Minimum these three languages.
well i'm happy to learn and speak atleast 5 languages. English, Hindi, Urdu, Telugu & Tamil...
our children are fast gen X,so they can learn much more fast and perfectly. then our Gen.

Well, we are still better off than more than half of the world at least !

Grammatically Indians speak very good English(sometimes better than English-speaking countries), but their pronunciation is not as good as native speakers.Indians do not speak English with proper native accent, i admit !
You must log in or register to reply here.
Similar threads
AK 203 production start soon in India
Aid, Help or Support India can give to Taiwan in case of PRC's invasion of Taiwan
Defined | Strains on India-Russia defence cooperation
India may scrap 6.5 lakh Ak-203 rifle deal, and opt for SSS Defence's upcoming 7.62mm Ak type Rifle
Share:
Facebook Twitter Reddit WhatsApp Link