Abdus Salem killed said:
Oh buddy boi
Quad does nothing Thier nothing in quad it's a economic alliance not military


10 times more yes then the covid deaths are more than the deaths during partition it's 9 percent death rate I would say it's 2-2.3 times more conservatively

Did you not claim no Chinese died and Indians ran away lol
And you can take ladakh in 5 days ?

hit&run said:
India must reciprocate by objecting Tibet visit of any Chinese leader. These noodles are getting too much levy of our goodness.
Click to expand...

saneel2014 said:
I guess he is that hemat guy from twitter...he posts similar shit
Click to expand...

@mist_consecutive what do you think is going in GOI.

It's not that chinese will start launching missiles if we post our own videos so what is it?

crankthatskunk said:
I think , the other guy has introduced me. I am one who doesn't hide his face, not like many SM worriers.
Now looking at your post, it is wrong on so many counts.

China is trying to create an artificial enemy in India!!
Who has been joining Quad and like against China!!
Do you think Chinese are not justified to mark India as enemy!!

An Indians is trying to mention Covid-19 Deaths figure as diversion. A country where according to its own journalists the deaths are reported 10 times lower than actual figures. Even more than 10 fold with some conservative estimates.
Click to expand...

China supports Pakistan which carries out terrorist attack in India. China protects terrorists at UNSC using veto. You have always considered us as enemy.

doreamon said:
A good talk .. But what does it means to be ally with USA . . Does it means ending relation with russia .. If it is so it cant happen because our aircrafts , ships, submarines ll be grounded without russian spare parts and help ..
nd i also do not think USA sees china like it used to see soviet .. Despite wht u see on the surface ground reality defy everything ... If it did two nation wld not have shared such trade relations with America having its biggest trade deficit , western companies investing billions in china ...

USA think tanks still obsessed with Russia a 1 trillion dollar economy and this has been a bane for india . Rather, it is better to ally with Israel, France and Japan.
I dont think usa ll go to a great extend even for Taiwan at this situation because the amount of dependence they have on china ll sink American economy...

And Sooner Putin retires better it is for us ..

This is true but US is an unreliable ally. It is too selfish to be a long term ally.

Sehwag231 said:
China supports Pakistan which carries out terrorist attack in India. China protects terrorists at UNSC using veto. You have always considered us as enemy.
Click to expand...

Again we are playing debate-debate just like Kashmiri Pandits.

Just shoot these bastards and ban them.

People mocks him for his cold response many time but he has a great anilty to change the things at grassroot level which he has donstrated during his ministership.
A

All of them have their eyes bandaged heavily.

Abdus Salem killed said:
POWs are blinded when send back so that they don't know enemy formations but for sure Chinese have been beating them as one would expect these people fought and we're captured you can 3 of the people's knuckles are broken who they hit I don't know but it's incredible that the Chinese have no injured
Click to expand...

This is edited video. Do, you think they will show their injured in their own video?

Try to match some of them on your own 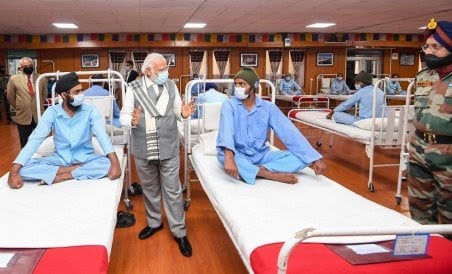 Probably to prevent any soldier from reporting the route faces or architecture of the base were they were kept back to the high command.

Sehwag231 said:
This is edited video. Do, you think they will show their injured in their own video?
Click to expand...

crankthatskunk said:
Thank you.
Correction, I am not Pakistani, I am British.
Click to expand...

No, you are a lowlife retard whose parents or an earlier generation went to the UK in search of a life better than the one in the hellhole excuse of a nation that Pakistan is. Sitting in the comforts of the West and enjoying the freedom that accommodative values have to offer, you dream of a muscular regressive Islamic land in the South Asia to take reigns- a place where you trace your roots to, and scourge for your dignity. Expecting degenerates like you to understand the gravity of harm Islamists have caused to this world is futile for you seek glory in the very same degeneracy. So, no you are not British- at the best you can be a leech from Pakistan holding a British citizenship.

Maveintel tweeted a blurred photo saying it's chini.
Some plz translate this

He has the fear of MI.
Fair enough.

Ah yes finally it's a chinese see the uniform color

The Shrike said:
When is Wolfpack baba going to start giving sources?
3 Infantry divisions + 6-8 CAB should be 70-90k troops easily (which sounds reasonable).
450 "tanks" in each CAB sounds a little hard to believe, that's a total of 2700-3600 tanks, which is ridiculous.
Click to expand...

Correct. 450 tanks is utter nonsense. Its =<112 tanks per CAB. And that too only if it is a Heavy CAB. Up in the mountains, most CABs would be Medium or Mountain or Light, none of which have tanks. Only a couple would be Heavy CAB.
Each Heavy CAB has 4 Battalions and each Battalion has 2 Tank Companies.
Each Tank Company has 10-14 tanks.
In total, each Heavy CAB would have no more than 112 tanks. 450 tanks in each CAB is nonsense.

In total, PLAGF has 1 Mechanized Division normally stationed in Xinjiang MD (with 99 tanks), 1 Heavy CAB in Tibet MD and Western Theater Command has 3 Heavy CAB in 76th Group Army and 1 Heavy CAB in 77th Group Army. That is a total of 5 Heavy CABs. Total tanks they can deploy against India (assuming they don't bring in additional Group Armies from outside Western Theater Command are: 112X5 + 99 = 659 tanks.
You are right, Wolfpack made a mistake.
BTW, I am not keeping track of which formations the Chinese have actually deployed against us, especially with all the rotations and posture changes.
@mist_consecutive or @mokoman might know if any Group Armies from outside WTC have been deployed against us.


DutchZZ said:
They're not going to release any videos.

The IA/GoI/MoD think this "video releasing" or "Psy Ops" is beneath them, of a low class nature.

No. Real reason is that the "Non-contact Warfare doctrine" is still a work in progress. Until it comes online, I don't expect any change.