India began a feasibility study to design and develop an indigenous 90-seater civilian plane to fly on feeder and trunk routes, a top official of the national civil aircraft development project said Thursday.

'The first meeting of the high power committee for the national civil aircraft development project has decided to go for a 90-seater configuration, with an option for a 70-seater shorter version,' committee chairman G. Madhavan Nair told IANS here.

The state-run Council for Scientific and Industrial Research (CSIR) May 7 constituted the 15-member high-power committee to launch the national civil aircraft development project.

The mega project will be led by CSIR, with its National Aerospace Laboratories (NAL) as the nodal agency and the feasibility report will be submitted to the union government in a year for consideration and approval.

Design and development of the prototype is estimated to cost about Rs.5,000 crore (Rs.50 billion) and is expected to be ready by 2015-16 for flight trials.

'Choice of the engine - propeller or turboprop version will be an important parameter to meet the requirement of short runways and fuel efficiency. The sub-committee on it has been asked to prepare a report in three months,' said Nair, former chairman of the Indian Space Research Organisation (ISRO).

Based on the sub-committee reports, the entire configuration will be finalised and technologies will be identified for absorbing directly into the aircraft.

'There are common technologies to be developed. We have asked the sub-committees to identify the technologies available for use and develop those required for the prototype,' Nair noted.

The project activities will be fully defined during the course of the year and the feasibility study will contain not only the technical specifications, but also the resources required in terms of facilities, tooling and human resources required.

'Initially, we will hire about 100 highly qualified people within the country and those Indians working abroad for the design bureau that will be set up at NAL,' Nair said.

As trained people in the aerospace area are limited, the committee will rope in design experts from the state-run organisations such as Defence Research and Development Organisation (DRDO) Hindustan Aeronautics Ltd (HAL) and ISRO to share some of the project workload.

When the project peaks up, about 500 people will be involved from the various state-run agencies and about 2,000 people from the industry

The study will also explore the need to go in for a public-private partnership at the beginning so as to involve the Indian aerospace industry, which will be responsible for production at a later stage and marketing and servicing subsequently.

'We are going to call for an expression of interest from the industrial groups in the country. And based on their interest, we will try to select partners who will work with us in the development phase. As there is good understanding of aerodynamics and configuration, we should be able to speed up the development pace of the project,' Nair said.

The committee hopes the prototype will be rolled out in the next five-six years for flight testing and certification for initial operational clearance. By then, it plans to have production facility in place with the industry.

'The regional transport aircraft for feeder service has to be fuel efficient, light, with high-tech electronics, able to take-off and land on short runways for short hauls, have minimum carbon footprint and should be comfortable with low noise,' CSIR director-general Samir K. Brahmchari said.

Bangalore: Facing tough competition, designers at the National Aerospace Laboratories (NAL) are mulling over a change in the configuration of the so-called regional transport aircraft (RTA) they plan to build to run on short-haul feeder routes.The RTA was envisaged as a 70-90 seat civilian aircraft powered by a turboprop engine—a gas turbine engine used to drive a propeller.

But NAL is now thinking of using a jet engine as well and increasing its capacity to 90-110 passengers.

"We are looking at an aircraft (where) both turboprop and turbojet can be used," said Samir Brahmachari,director general of the Council of Scientific and Industrial Research (CSIR), India's largest public-funded research agency. NAL is the CSIRlab for aerospace technologies.A 15-member committee for national civil aircraft development held its first meeting in Bangalore on Thursday, and set a one-year deadline for a feasibility study for the Rs2,500 crore plane project.

This will then be submitted to the government for approval. Developing and certifying the aircraft will take another six years after that. Planes made by Brazil's Embraer and Canada's Bombardier Inc. currently dominate such routes.While the Indian project is yet to get off the ground, Russia's Sukhoi Co. and China's China Aviation Industry Corp. are also building similar aircraft.V. Sumantran, who will be part of a two-member panel to attract private partners for the project in its design phase, said India was not too late to move.

"There is going to be tremendous competition. I suppose people would have asked the Tatas this when they started building the Indica (car). Is it too late to build an Indica now? Now the answer is, it created a company with global scale in the auto industry," said Sumantran, vice-chairman at Hinduja Automotive Ltd, who led the development of Indica at Tata Motors Ltd.
His partner on the panel will be Arun Firodia, chairman of Pune-based Kinetic Engineering Ltd. A tender will be floated to invite private participation.
Besides NAL, India's military plane maker Hindustan Aeronautics Ltd, the Defence Research and Development Organisation (DRDO) and the Indian Space Research Organisation (Isro) will also participate in this public-private partnership"To start with, we will have 100 people," said G. Madhavan Nair, chairman of the research council of NAL. "When the project is peaking, at least 500 people will be directly needed. About 1,000-2,000 people from various industries will be participating."

While public sector firms have built helicopters, trainer aircraft, fighter jet and two passenger planes, the expertise is still lacking in India's private sector.
companies such as the Tata group, Mahindra and Mahindra Ltd, Larsen and Toubro Ltd and Godrej"ƒIndustries Ltd are building capabilities in the aerospace industry, partly to meet local demands and partly to serve global companies such as Boeing Co. and Airbus SAS, which are looking at a low-cost manufacturing and design base.
Currently, only the Mahindras have the capability to build aeroplanes through their acquisition of two Australian aerospace firms in December. 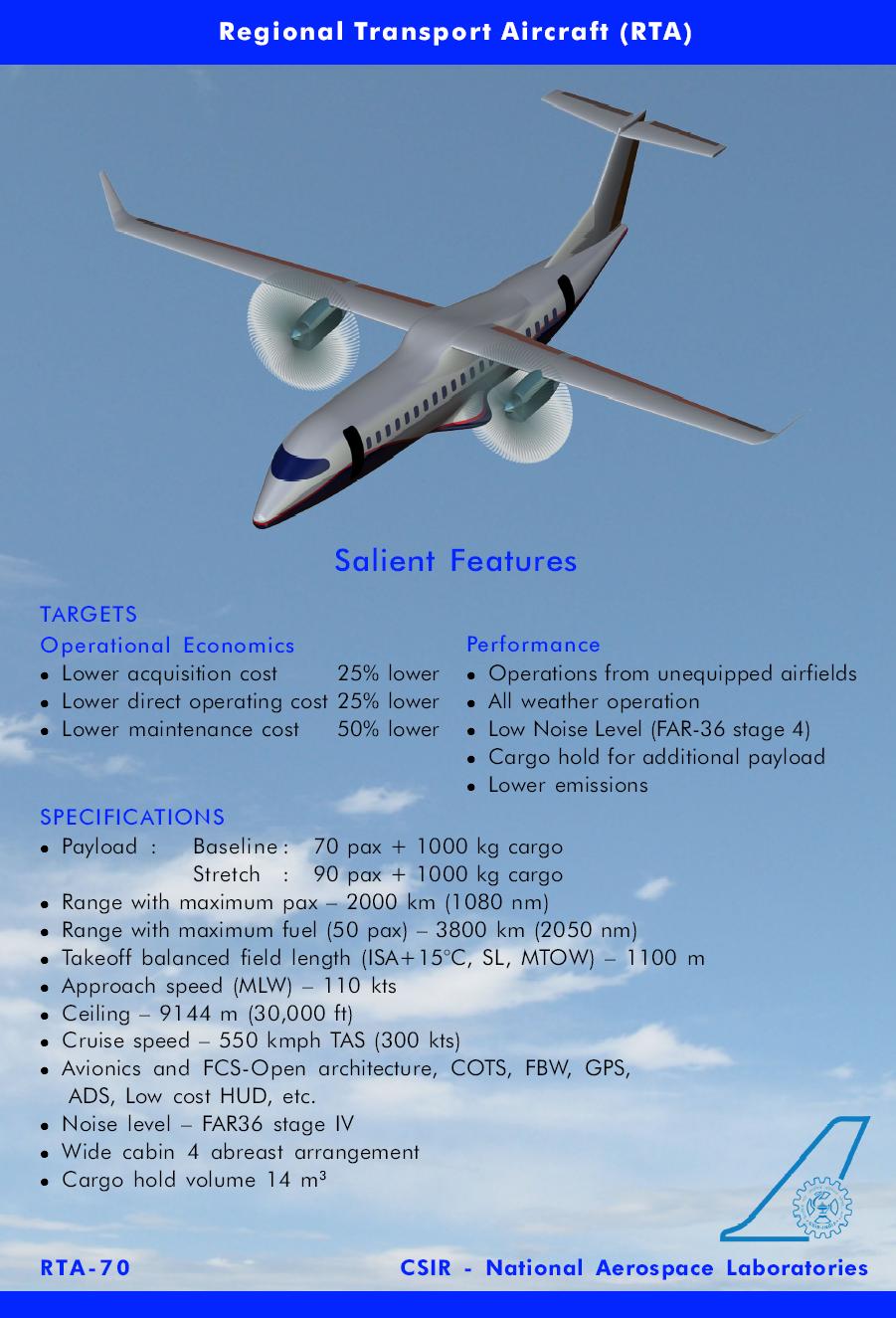 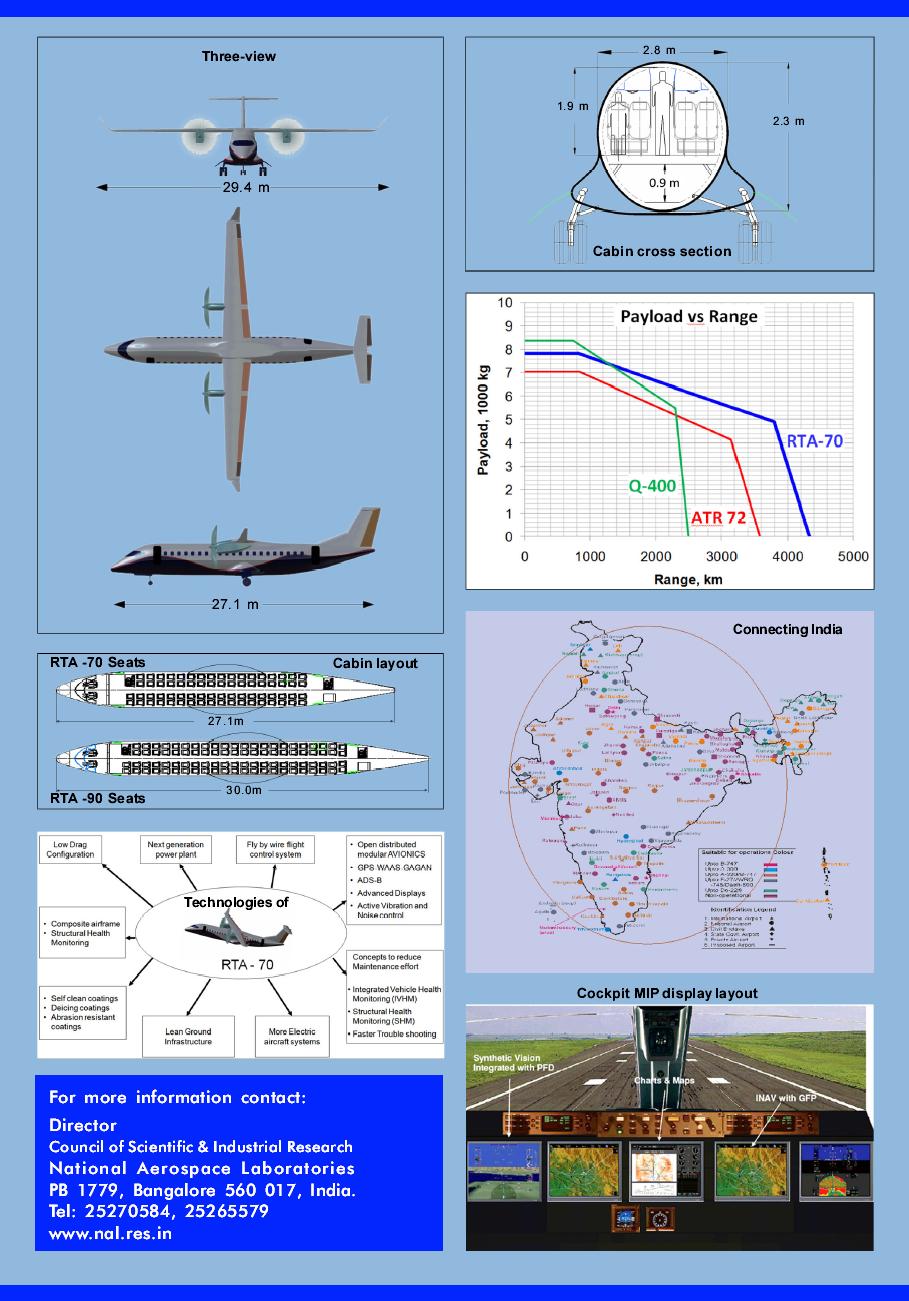 A turboprop with winglets? Not even Q400-NG has them. Not sure these planes even have a pronounced wingtip vortex effect.

Very nice stage I wish ADA and HAL woudl do the initial research and then leave the rest for the Private to make the key parts.

tarunraju said:
A turboprop with winglets? Not even Q400-NG has them. Not sure these planes even have a pronounced wingtip vortex effect.
Click to expand...

It does not have to do with the powerplant, it has to do with how long the flight will be at cruising altitude to make it worth it to take the drag penalty. The higher and longer you fly the more economical winglets are. If it is short flights that spend most of their time going up and down then the drag is not worth it. They must intend this aircraft to fly much longer distances than the typical turbo-prop passenger plane.
You must log in or register to reply here.
Similar threads
India to begin contract negotiations to acquire 56 Airbus C-295 Transports
Bengaluru may give India its first jet engine; testing begins
Lockheed begins construction of US presidential choppers in India
India and France Begin 10-Day Naval Exercise Christened 'Varuna'
Share:
Facebook Twitter Reddit WhatsApp Link