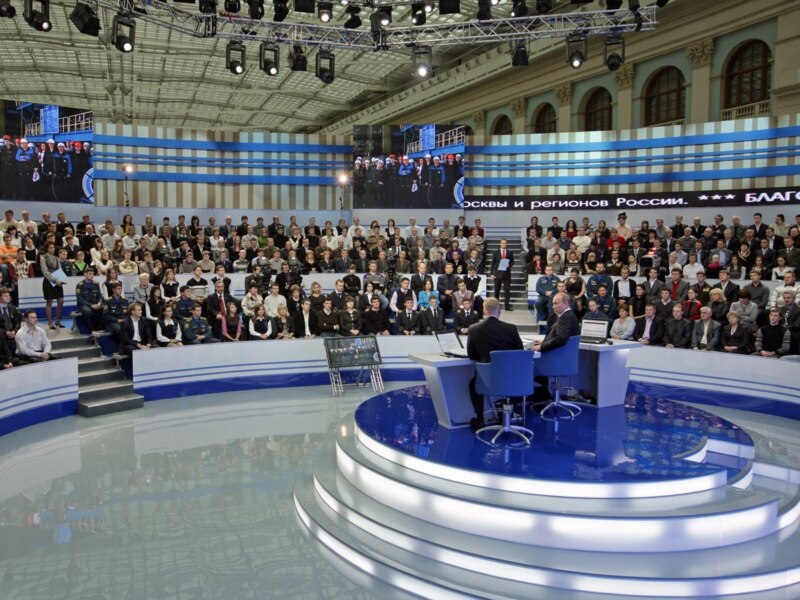 Prime Minister Vladimir Putin during his annual televised phone-in show in Moscow
He called for tough measures against terrorists. He accused the United States of holding up Russia's bid to join the World Trade Organization. He claimed that his country had weathered the worst of the economic crisis.

And for good measure, Russian Prime Minister Vladimir Putin added that he had no plans to leave politics and would consider running for president in 2012.

Asked whether he would ever exit the political arena and pursue a quiet life, Putin deadpanned: "Don't hold your breath." When he was later asked if he planned to run for president in 2012, he left the possibility open.

"I'll think about it," Putin said with a wry smile.
"There is still enough time. I think today every one of us should carry out his duties and work efficiently in his own place. And decisions concerning the 2012 election campaign will be made depending on the situation in the economy and the social sphere."

Speaking later from Rome, the current Russian president, Dmitry Medvedev, said he would likewise consider a run in 2012.

"Prime Minister Putin said he doesn't rule out this possibility, and I also say I don't rule it out," Medvedev told a news conference co-hosted by Italian leader Silvio Berlusconi. "But this is only if Mr. Medvedev and Mr. Putin have a chance."

Putin, who stepped down as president last year but remains the country's most powerful politician, took pre-approved queries from ordinary Russians for more than four hours on December 3 in his annual televised question-and-answer session. Last year's session was just three hours.

The prime minister sought to reassure a jittery public reeling from an ongoing economic crisis and frightened that a new wave of terrorist attacks could follow in the wake of last week's bombing of a luxury train.

The November 27 bombing of the Nevsky Express, an upscale passenger train traveling between Moscow and St. Petersburg, killed at least 30 people and injured around 100 more. It was the worst terrorist attack in Russia outside of the North Caucasus in five years and has raised fears of a new wave of terrorist attacks in major Russian cities.

"The recent tragedy shows that we have to intensify our efforts in this area. And of course, we need to take very tough measures against criminals who carry out such terrorist acts," Putin said.

A website linked to Chechen separatist fighters, kavkazcenter.com, said on December 2 that it has received a letter from Islamist militants who claim responsibility for the attack.

According to the website, the letter said the train bombing "was prepared and carried out" on the orders of Doku Umarov, the self-proclaimed leader of a Caucasus emirate that has sought to unite militant Islamist groups in Russia's North Caucasus and establish Islamic Shari'a law in the region.

On the economic front, Putin said the worst of the crisis was over and he expected the economy to shrink 8.5-8.7 percent this year, less than some had expected. He noted that the economy had "grown by an average of 0.5 percent per month over the last five months" and expressed hope that the positive trend would continue.

"We can say with a great measure of certainty that the peak of the crisis has been overcome -- although turbulence in the world economy, and consequently in the Russian economy, remains, and the way out of this crisis will require time and a great deal of strength and resources from us," Putin said.

The premier also criticized the United States over the Jackson-Vanik amendment, a Cold War-era law imposing trade restrictions on Russia that remains a sticking point in U.S.-Russian relations. Putin called the amendment "an anachronism" and accused Washington of holding up Russia's efforts to join the World Trade Organization (WTO).

"For reasons unknown to us, some countries, including the United States, are blocking our WTO membership," Putin said. "Our main priority, however, is integration in the post-Soviet area, so we are very happy about the current process of establishing a customs union among Russia, Kazakhstan, and Belarus."

The session was conducted in a specially built Moscow studio and included video links to various points across Russia including Pikalyovo, home to the BazEl Cement company, the turbine room of the giant Sayano-Shushenskaya hydroelectric dam in Siberia where an accident in August killed 75 people, and the city of Tolyatti, home of the troubled AvtoVAZ carmaker.

Pikalevo made headlines in May when residents, angry about unpaid back wages, stormed the mayor's office and blocked a federal highway. Putin showed up in June and publicly dressed down BazEl's main owner, Oleg Deripaska, and the wage arrears were quickly paid out.

Putin told a questioner from Pikalevo that he would return to sort things out again if need be.

"If the situation requires, I will come to your town or to any other place in the Russian Federation. It is my duty," Putin said.

The event was heavily choreographed. All questions were screened in advance and access to the Moscow studio and the video link-up locations was by invitation only. Beaming and perfectly coiffed presenters counted more than 2 million questions submitted by phone, Internet, and text message -- only a tiny fraction of which were ultimately posed to the prime minister.

Putin commented on everything from the performance of Russia's football team, which failed to qualify for the 2010 World Cup championships, to the value of Lada cars, to the country's birthrates, to the ostentatious habits of Russia's nouveau rich, whom he chastised for bad taste in the way they display their wealth.

He denied supporting Ukrainian Prime Minister Yulia Tymoshenko's presidential bid but noted that his government was cooperating with hers.

He also called for a balanced assessment of Soviet leader Josef Stalin, saying his legacy was not all positive or all negative. Putin praised Stalin for industrializing the Soviet Union and winning World War II but condemned his repression.

A.V. said:
the most interesting thing is both putin and medvedev have showed interest in the 2012 polls separately thats really interesting put the catch is putin is playing the cards close to his chest his nomination will depend on the state of russian economy
Click to expand...

Medvedev is nowhere close to having the popularity Putin has, he will either back out on his own or be forced to back out.

an indicator of putin's popularity "the putin song"