India has significantly enhanced its attack and heavy lift helicopter capabilities with selection of Boeing's AH-64E Apache and CH-47 Chinook. The procurement, estimated at around $3 Billion, was initially announced in 2013, before receiving approval from Defense Acquisition Council (DAC) in August 2014. MoD signed the contract with Boeing for the production, training and support of 22 Apache attack helicopters and 15 Chinook Heavy-Lift helicopter in September 2015.
Mr. Bradley Rounding of the Vertical Lift Global Sales & Marketing team at Boeing Defense, Space & Security, briefed the media about its vertical lift business and how the Apache & Chinook would serve to enhance the IAF capabilities. 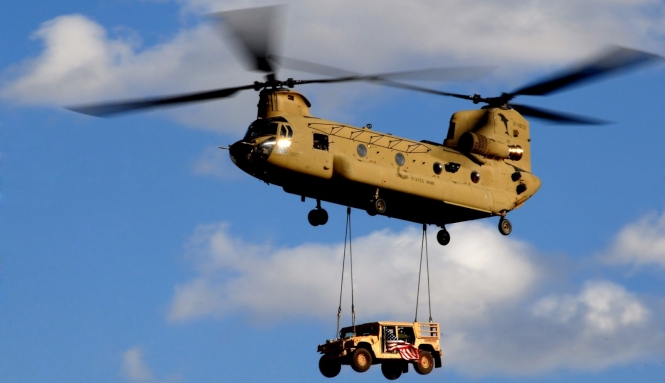 A Chinook Heavy-Lift Helicopter lofting a High Mobility Multipurpose Vehicle (HUMVEE)
With the selection of the Apache, the dominant force projection capabilities of the IAF will be enhanced considerably. The Chinook on the other hand has unsurpassed ability to deliver heavy payloads to high altitudes, and is eminently suitable for operations in the high Himalayas. The rotorcraft has been battle-tested in diverse extreme conditions throughout the world, and has proven to operate in the wide range of conditions that typify India's topography.
The platforms represent the best of high-performing technologies that will modernize India's defense capabilities and will greatly enhance the country's defense and humanitarian missions. It will present India with enhanced dominant force projection capabilities and will address the full spectrum of conflict to peacekeeping and nation building. Both variants selected are the latest models of these rotorcraft.
The Apache is the most capable multi-role combat gunship combining performance and lethality with more affordable and efficient maintenance. The tandem rotor Chinook is the most versatile, advanced heavy lift helicopter in the world, providing maximum value at the lower risk. It offers the country heavy-lift and high-altitude transportation for a multitude of military, humanitarian, rescue, disaster relief, fire-fighting and nation building missions in all climatic conditions.
Significant portions of the helicopters are already being made in India, Dynamatic Technologies manufactures the ramp and pylons for the Chinook, while Boeing's JV with TATA Advanced Systems Ltd (TATA-BOEING Aerospace Ltd) will manufacture AH-64 fuselages for the Indian and global markets.
http://www.indiandefensenews.in/2017/02/idn-take-apaches-and-chinooks-on.html
You must log in or register to reply here.
Similar threads
IDN Archives: Why India Should Dump The FGFA Project?
IDN TAKE: DRDO: Aeronautical Systems
IDN TAKE: Why India Should Buy the F-35 Lightning II
Apache and MIG-29s pressed into action | India-China standoff
Share:
Facebook Twitter Reddit WhatsApp Link