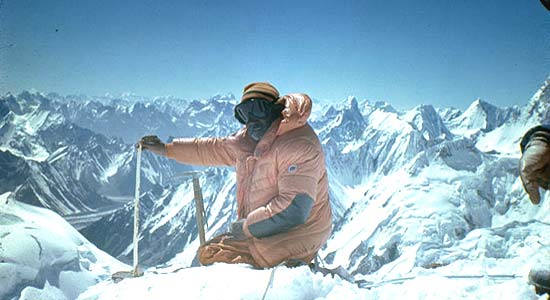 In the army, they knew him as ‘Bull’ Kumar, awed as his mates were by the strength of his thick, muscular neck. Col Narendra Kumar earned this sobriquet at the National Defence Academy, then in Dehradun, during the first boxing match he fought. His rival was a senior cadet, S.F. Rodrigues, who went on to become the chief of army staff. Col Kumar lost the bout, but the ‘Bull’ epithet stuck.

Since then, Col Kumar has done everything in his long military career to justify the name his colleagues gave him. Like the bull, he loves a challenge, sniffs it even before others can see it, and goes at it in a single-minded pursuit, indifferent to consequences, full tilt, tail up. It was these qualities of his that ensured the Siachen glacier became an integral part of India. 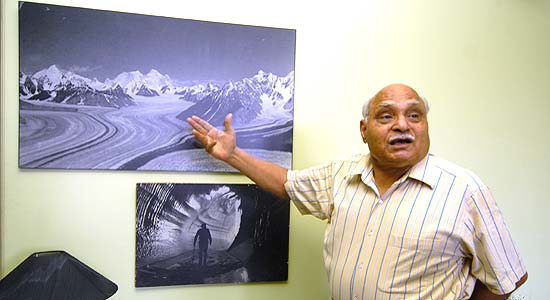 Bull Was There: Narendra Kumar tells the story of all those years in the cold

The heroic story of Col Kumar dates to 1978, when he took a major expedition to the inhospitable glacier. This was six years before India launched Operation Meghdoot to thwart Pakistan’s designs on the Siachen glacier. No doubt, he knew the mountains well, commissioned as he had been into the Kumaon Regiment and consequently having spent the better part of his military career surrounded by troops born and bred in the rugged hills of Kumaon. Yet glaciers aren’t just stunningly beautiful mountainscape: they can numb, daze and kill you. Col Kumar, posted as the commandant of the army’s High Altitude Warfare School (HAWS) in Gulmarg then, knew he was heading into uncharted territory. “This was the first major expedition into the unknown,” he says, reminiscing about it in his flat in Delhi. “We had some reports that the Americans were showing Siachen as part of Pakistan in their adventure maps.”

What Kumar and his team planned was to reach the glacier’s snout, its lowest point, where the ice melts into water, and then trek up the 77 km of treacherous crevasses, mountains, passes and snow-covered peaks to reach the source. The colonel knew the stakes were high, that this mission could decide the future of India’s strategic outreach and establish a critical wedge between Pakistan-Occupied Kashmir and the swathe of Indian territory the Chinese had occupied in the aftermath of 1962. “Our equipment wasn’t the best, we didn’t have any maps,” he recalls. “We were going in blind and all we had was a rough idea of the peaks which had been named by the British decades ago.”

Bound to each other by thick ropes, trekking across the harsh terrain for weeks on end, Col Kumar became the first Indian to climb the Sia Kangri peak, which offers a majestic view of the Siachen glacier. But there was also a surprise awaiting the team—a Japanese mountain expedition facilitated by the Pakistan military had a presence there. After a “sit-rep” (situational report) was dispatched to the army headquarters, the team went from peak to peak, staying ahead of snow avalanches to chart the area.

Cut to 1984: intelligence information convinced the army headquarters that the Pakistanis were planning to militarily occupy Siachen and the heights of the nearby Saltoro ridge. There was evidence: in the autumn of 1983, a team from the Indian army’s elite Ladakh Scouts had sighted a Pakistani special forces unit from the ssg in the Siachen area. This prompted the area army headquarters to immediately draw up plans for a major operation in the summer of 1984. The fourth battalion of the Kumaon Regiment was assembled and equipped for Operation Meghdoot, which had as its bulwark Kumar’s maps, films and his knowledge of the area.


“Our equipment wasn’t the best, we had no maps,” says Col Kumar. “We were going in blind, with just a rough idea of the peaks.”


On April 13, 1984, Operation Meghdoot finally got under way. Air force choppers, their engines clattering in protest at being pushed to the limits of technological possibility at incredible heights, began to drop soldiers at Bilafond La which is today part of the Siachen Base Camp. For the first time in history, India had stamped its claim on the Siachen glacier. The sturdy Kumaonis then trekked up the glacier to secure the two major passes—the Sia La and Gyong La—even as the Pakistanis were scrambling their troops into the region. The Kumaonis moved up the Saltoro ridge, overlooking the approach from Pakistan-occupied Kashmir, and Sia Kangri to establish posts that would give India the command of the glacier. With hands veritably frozen around their 7.62 mm rifles, Indian troops battled the elements to establish a military foothold in what would become the world’s highest battlefield.

“At times, you face impossible choices on the glacier. We always moved in pairs, bound to each other by rope. At one point, my buddy fell into a crevasse. For 45 minutes, I grappled with the idea of dying with him or cutting him loose and saving my life or to hang with him till the cold killed us both. I am glad that I never cut the rope.” In those 45 minutes, the buddy crawled up, the duo living to continue their foray from peak to peak. 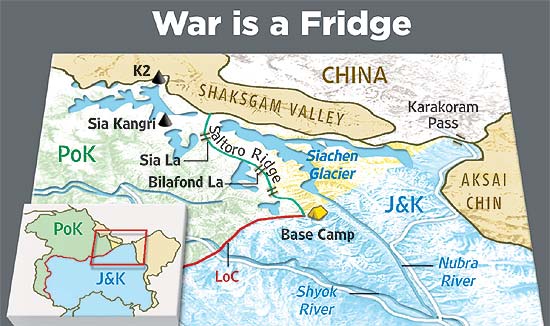 To the west of the glacier were hostile Pakistani troops; on the east and to the north stood the Chinese. Had Col Kumar been given a clearance, he’d perhaps have climbed the K2 peak in the Karakoram ranges as well. But to reach K2, he’d have had to traverse the Shaksgam valley, which the Pakistanis had illegally ceded to China. So, India halted its advance on reaching the northernmost tip of the Siachen glacier, settling in on its frozen waste.

As Indian troops established more posts, a key base on the glacier was named Kumar Base: perhaps the only living Indian army officer to enjoy this singular honour. India’s claim to Siachen was confirmed. But the “refrigerated combat” against the elements and Pakistan had only just begun.

Conflict
Freeze It There
Siachen, irreversible line in the snow
V.R. Raghavan

The military conflict over the Siachen glacier began 25 years ago, catapulting it to the world’s highest battle zone and demonstrating the limits to which human endurance and military ingenuity can be pushed. The strategic consequences of the conflict, like the slow but relentless movement of the glacier, have been irreversible.

But first, the origin of the dispute. Pakistan had linked with China not only with the road over the Khunjerab Pass but also with cartographic intrusion by unilaterally joining the lac (Line of Actual Control) in j&k with the Karakoram Pass on the India-China border. China was clearly complicit by insisting with India that the area was disputed. Pakistan had also commenced permitting foreign mountaineering expeditions into Siachen. This was confirmed by Indian military mountaineers sent to the area, leading to military teams going up the Saltoro mountain range to deny the passes for entry into Siachen. Pakistan initiated a major military venture to occupy these passes, and Prime Minister Indira Gandhi wouldn’t countenance this. The Indian army pre-empted Pakistani plans by a daring operation, and the rest is history.

What started as a small-scale military action became a permanent military occupation, having lasting consequences on both countries. For one, the Indian occupation of Siachen was tantamount to another humiliation for the Pakistani military. Benazir Bhutto rubbed this in by her scathing criticism of Gen Zia-ul-Haq, which became a rallying point of her rise to power in Pakistan. The Pakistani military was forced in the many rounds of Siachen talks with India to insist on one point—seek an Indian withdrawal.

When that didn’t work, Pakistan started planning military moves to evict Indian forces. Its attempts were roundly defeated, and Bana Post and Sia La became permanent fixtures in our military folklore. It then planned the ambitious venture to cut the Srinagar-Leh road in the Kargil sector, a plan mooted by Gen Pervez Musharraf, the then dgmo. Prime minister Benazir rebuffed him. Not willing to relent, Musharraf, as army chief, put the aborted plan into action, with long-term consequences for himself and Pakistan’s political future. Then followed the attack on Indian Parliament with a military mobilisation by both countries. These strategic blunders of raising the stakes for war, and the A.Q. Khan episode, seriously damaged Pakistan’s credibility as a nuclear power. Siachen was thus the starting point of the negative strategic outcomes Pakistan has incurred.

Islamabad wants to negotiate the Siachen issue only to seek an Indian withdrawal. This is necessary for the military to reinforce the dissimulation in Pakistan that it’s present on the Siachen glacier when, in fact, it’s nowhere near it. And secondly, to show it has imposed heavy costs on the Indian military and forced it to withdraw. On the Indian side, negotiations are linked to demilitarising the area as one amongst many steps towards a lasting peace. This doesn’t suit Pakistani interests which are best served by the continuing military standoff along the lac.

Over the years, public opinion in India has evolved into taking tremendous pride in its military achievements in Siachen, thus making it difficult for its political leadership to act on a settlement which would be seen as a concession to Pakistan. This reality is often ignored by major powers which have more than once suggested to India that a concession on Siachen can strengthen the Pakistan’s hand in making progress on j&k. When the Indian military leadership took public positions against such concessions, the political establishment quickly left the matter alone.

Defence minister A.K. Antony has clearly said there can be no withdrawal from Siachen, reiterating the military view that current ground positions should be authenticated before other steps can be examined. Above all, New Delhi doesn’t know who will deliver on a Siachen agreement—while the weak Pakistani political leadership definitely can’t, its military command shows no signs of new thinking. Siachen, thus, remains one amongst many crucial elements that explain Pakistan’s journey on the slippery strategic road.