NEW DELHI - The Indian Air Force’s (IAF) deep penetration strike aircraft Jaguar will fly down to Oman this month for a military exercise.

“To further military diplomacy and for addressing issues of inter-operabililty, IAF will be conducting a series of international exercises. Our fighters will be going to Oman for a bilateral exercise,” IAF chief Air Chief Marshal P.V. Naik told IANS.

The Royal Omani Air Force is the only other force in the world which still flies the British-built Jaguar, known as Shamsher in the IAF.

About half complement of the squadron, about five or six jets, are likely to go for the exercise to be conducted in the third week of October. The IAF’s ‘Flaming Arrows’ Jaguar squadron will be participating in the exercise.

“With only two air forces flying the combat jets, there have been training exchange programmes with Oman on this front,” a senior IAF official said Saturday, requesting anonymity.

India and Oman have agreed to step up cooperation by upgrading their joint military exercises and already have a memorandum of understanding on defence in place. Last year, Oman offered to provide berthing facilities for Indian Navy’s warships patrolling the piracy-hit waters off the shores of Somalia.

Oman has also been seeking assistance from the Indian armed forces to set up credible supply systems for their defence equipment.

This is a two in one deployment


IAF Vice-Chief Air Marshal P.K. Barbora said the air force could be called upon to support anti-piracy operations off the Somalian coast to deal with the expanding footprint of the pirates.

“If the swatch becomes any bigger, the navy may not be able to cover the entire area due to constraints of speed and vessels. This is when the IAF may be asked to offer help,” said Barbora, on the first-ever Indo-Oman air exercise, codenamed Eastern Bridge, from October 22-29.

IAF may use fighters against pirates- Hindustan Times 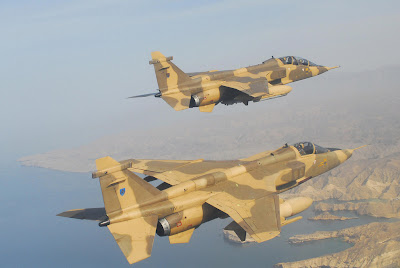 The Indian Air Force (IAF) and Royal Air Force of Oman (RAFO) will conduct a week-long bilateral air exercise codenamed - Eastern Bridge - at the RAFO Base, Thumrait, Oman, from Oct 22-29. This will be the first-ever air exercise between the two countries.

Six, single-seat, Darin-I Jaguars from the Indian side will participate alongside RAFO Jaguars and F-16s. Incidentally, the two Air Forces are among the only ones that continue to operate the twin-engine Jaguar aircraft till date.

The IAF will also involve two Ilyushin-78M air-to-air refueler aircraft for tanking the Jaguars enroute to Oman. Meanwhile, an IL-76 will airlift the IAF air warriors to Oman. The main IAF contingent comprises 33 officers and 65 personnel below officer rank (PBOR). The support team of IL-76 and IL-78M additionally comprises 12 officers and 26 PBOR. Group Captain V Dedgaonkar is the team leader, while Group Captain K Kale is the Exercise Director for the IAF. The Jaguar Detachment will be led by Wing Commander A Mathur. The pilots belong to the two Jaguar squadrons - 16 (Cobras) and 27 (Flaming Arrows) that are based at IAF’s Gorakhpur airbase under Central Air Command.

A senior Air HQ observer along with one staff officer will also visit the IAF contingent during the period of the exercise. The exercise in the Gulf region will enhance understanding of operational, maintenance and administrative procedures between RAFO and the IAF. The bilateral exercise would also be cost-effective in terms of benefit realization of operational and tactical preparedness over an unknown mixed terrain of land and desert.