This is among only 19 Stupas believed to have been built in China during the reign of Ashoka, which saw as many as 84,000 Stupas built to house the relics of the Buddha.
Ananth Krishnan | Nangchen (Qinghai), September 17, 2015 | UPDATED 18:24 IST 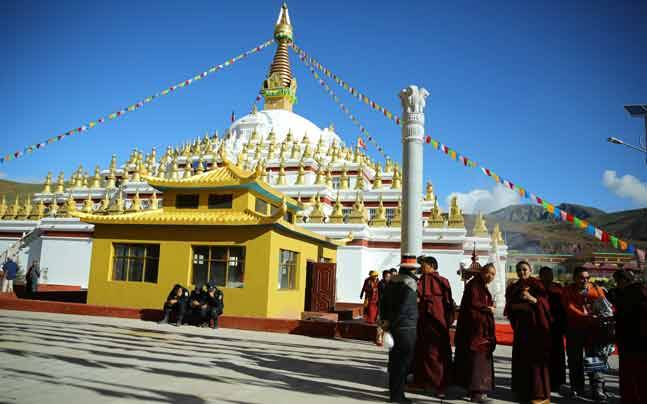 The restored Ashoka Stupa -a towering white and gold structure - and a new golden Buddha statue were unveiled by Gyalwang Drukpa.


A restored 2000-year-old Ashoka Stupa that had fallen to ruin in China was this week publicly unveiled for the first time in a remote Tibetan town, with hundreds of worshippers paying their respects to a forgotten Indian Buddhist symbol in China.

At a grand ceremony on Tuesday in Nangchen, a town in Yushu prefecture in southwestern Qinghai province bordering Tibet, the restored Stupa -a towering white and gold structure - and a new golden Buddha statue were unveiled by Gyalwang Drukpa, the Ladakh-based spiritual head of the Drukpa lineage - a Himalayan Buddhist sect that has following in Tibet, Nepal, India and Bhutan - who supported the restoration since the project began in 2007.

In what is a rare visit by an Indian Buddhist leader to a Tibetan area of China, Gyalwang's presence in Nangchen attracted hundreds of Tibetan followers from surrounding regions, who lined up for hours to seek his blessings.

"Ashoka was the biggest and most well known Buddhist king of India. All over the world his name is well known. We are very proud to do a little bit of contribution to the Ashoka remains so today I am very happy," Gyalwang said.

"The restoration and commissioning.. will go a long way in enshrining the principles of borderless humanism and spread the light of Buddha's message globally. For India and China, this is represents a new area of informal engagement after the initiatives indicated by Prime Minister Modi and the positive response he has received from the Chinese leadership".

The original site of the Stupa - a small mound of white stone - is preserved under the new towering restoration. This is among only 19 Stupas believed to have been built in China during the reign of Ashoka, which saw as many as 84,000 Stupas built to house the relics of the Buddha. While three other Stupas are believed to be located in Xian, Hangzhou and Nanjing, this is the first to have been restored and documented in detail. 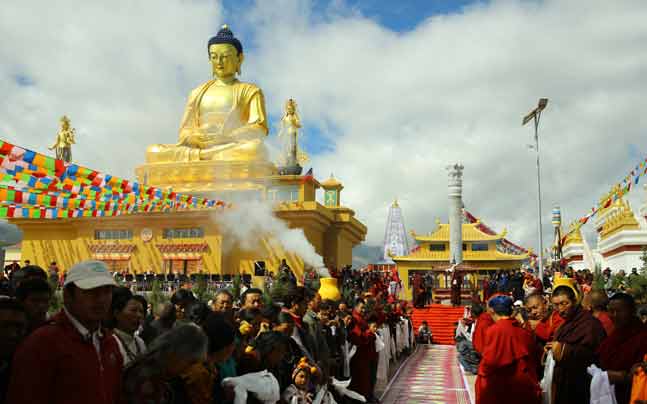 Texts from local monasteries had for centuries referred to the existence of the Stupa, according to Yeshe Namgyal, Nangchen-based monk. The Stupa survived both Mongolian invasion and the Communist Cultural Revolution of the 1960s, with locals coming together to protect the relics even as the Stupa suffered damage.

Nangchen is a predominantly Tibetan town in Yushu, a poor prefecture that suffered a devastating earthquake in 2010. The Drukpa monasteries have traditionally held influence in Nangchen, while parts of the region also follow the exiled Dalai Lama's Gelugpa school and the India-based Karmapa's Karma Kagyu school.

Shops in the town display photographs of the Karmapa - who unlike the Dalai Lama is not seen by Chinese authorities as sensitive - although many residents say they privately also worship the Dalai Lama, who China accuses of being "a separatist".

In some areas such as Qinghai, authorities appear to have loosened restrictions, unlike in some parts of the Tibetan Autonomous Region where large religious gatherings are strictly supervised and photographs of the Dalai Lama are banned.

Asked about the situation facing Tibetans in China, Gyalwang Drukpa, who is based in India, said he was "in a position of confusion". "Some of them say the situation is good, some say it's not good. Obviously I feel some part of Tibet has a little bit of difficulty and some has a good life, so to speak."

Too many connections also linkages from before ... Ideology makes one think only now !!
You must log in or register to reply here.
Similar threads
Hundreds of thousands turn out to see Pakistan's rising son
MORE UYGHUR HORROR China Harvesting Hundreds of Thousands of Organs from Mass Murder
CNN: China has saved hundreds of thousands of lives by reducing air pollution, study says
Another Paki Muslim rape gang exposed in UK-Telford, hundreds of children raped
Share:
Facebook Twitter Reddit WhatsApp Link