The L-15 is an advanced trainer aircraft currently under development by Nanchang based Hongdu Aviation Industry Corporation. The aircraft made its maiden flight on 13 March 2006. The aircraft's general designer is Mr. Zhang Hong, and the development is reportedly assisted by Yakovlev OKB of Russia. The L-15 is a direct rival to the Guizhou Aircraft Industry Corporation (GAIC) JL-9/FTC-2000 Mountain Eagle in competition for the People's Liberation Army Air Force's (PLAAF) next-generation advanced trainer aircraft program.

HAIG unveiled a full-scale mock-up of its L-15 advanced lead-in fighter trainer (LIFT) in the 2004 Zhuhai Airshow. The two-seat, two-engine L-15 features the latest advanced technologies developed by China, such as digital quadruple fly-by-wire (FBW), glass cockpit (two multi-color head down displays for both the front and rear cockpit, and an additional head-up display for the front cockpit), and hands-on-throttle-and-stick (HOTAS) flight control. The look-down field of view for the frontal cockpit is 18°, and 6° for the rear cockpit, exceeding the US requirement. The aerodynamic performance of the aircraft is enhanced by its large leading edge extensions (LEX) design, which gives a maximum angle of attack of 30°. This is very useful when trying to simulate the maneuvers of advanced fourth-generation fighters such as J-10, JF-17 and J-11. JL-9/FTC-2000 Mountain Eagle trainer jet from Guizhou Aircraft Industry Corporation (GAIC) is a direct competitor of the L-15. L-15 has a wide range of more advanced features comparing JL-9, however JL-9's development and production would not rely on key components that can only be imported from foreign suppliers, which is a key benefit comparing L-15 heavily relies on AI-222 series turbofan engine from Ukraine.

With the L-15, student pilots will be able to complete mission flight training and advanced combat training, as well as complete all basic jet flight training courses. The aircraft also has six (four under-wing and two wingtip) pylons to carry various air-to-air and air-to-ground weapons. If necessary, it can serve in the lightweight attack role with minor modifications, carrying up to 3 tons of armament.

The first L-15 prototype (#03) rolled out in September 2005 and made its maiden flight on 13 March 2006, piloted by the two of the chief test pilots of the program, Senior Colonel Yang Yao and Senior Colonel Zhang Jingting. The 3rd chief test pilot of the program is Senior Colonel Li Zhonghua. Currently, Hongdu is actively marketing the aircraft to both domestic and international markets. In April 2006, it was reported that the PLAAF placed orders for 4 L-15 trainers, and small batch production will start in 2007.

Each of the first two units (#01 & #02) are powered by two ZMKB-Progress (Lotarev) DV-2 engines, which do not have afterburners, and these two aircraft thus do not have the capability to reach supersonic speed. The third unit (#03) is powered by a pair of an improved version of DV-2, the DV-2F, with afterburner, so that it can and has already reached supersonic speed. The subsequent production units are expected to be powered by Ukraine's Ivchenko-Progress AI-222K-25F turbofan engines with afterburner once co-production license is obtained by the 608 Institute. Ukraine company also developed a greater thrust of AI-222-28F (thrust 4500 kg) and AI-222-30F (5000 kg thrust) engine. The latter two may be introduced for the equipment and load up more L-15, of course, they may also be used to equip other aircraft in China.

In Paris air show 2013, CITIC representative Ma Zhiping confirms that contract secured to export twelve L15 aircraft to an African country, however Ma did not confirm which country that is. Ma also confirms L15 is configured with three-axis fly-by-wire system, and is able to simulate most Chinese advanced fighter jets, as well as western ones.

Guy's I think we have an adversary for our LCA or maybe not. What do you think?

Looks a little too similar to yak130. I suspect xeroxing as usual. @gadeshi how wrong am I sir? 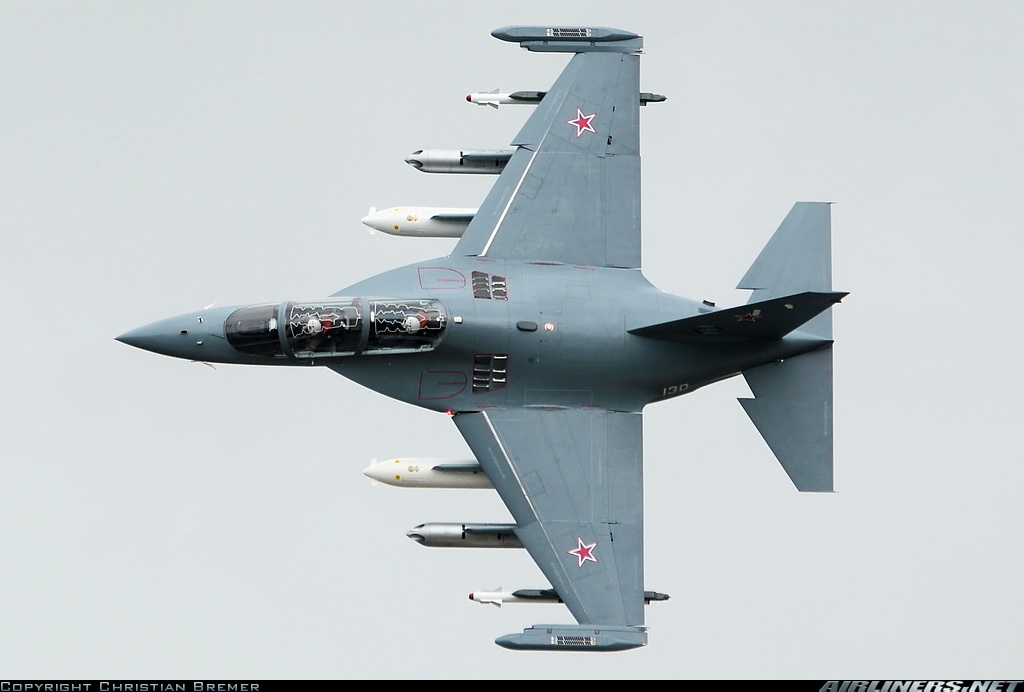 and yes both are using Ukrainian
Ivchenko-Progress AI-222 engines . India should Also make such Aircrafts with this Engine >>

You must log in or register to reply here.
Similar threads
How Did India Manage to Build an Advanced Fighter Jet Like the Tejas?
This Upcoming ‘Super Interceptor’ Will Be Russia’s Most Dangerous Combat Jet -The MiG-41
Chinese Regional Jets & Airliners
AFTER JF-17 FIGHTER, CHINESE J-11B JET COULD BE NEXT ON PAKISTAN’S SHOPPING LIST
Share:
Facebook Twitter Reddit WhatsApp Link