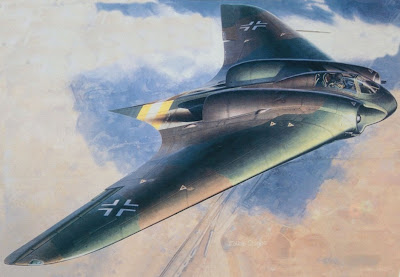 It has been 65 years since the World War 2 ended but the legacy of the war lives on be it in the memory of those brave men who fought in war or in the holocaust. Today we all rightfully consider Hitler the greatest villain of all time but sometimes evil ends up building better than the good. The case of Horten Ho-229 is the best example of such a event. Not many knew about its existence but the National Geographic Channel increased the awareness of what is believed to the world first stealth aircraft.
Horten Ho-229 also known as Horten Ho IX or the Gotha Go 229 was developed by the Horten brother to meet the demands of Reichsmarschall Hermann Goring. Goring wanted a aircraft which could carry a payload of 1000kgs, travel a distance of 1000kms at the speed of 1000 kmph. Horten brothers decided to take up the challenging task. The brothers had no formal education in aircraft building neither had built jet power fighters before.
Horten Ho-229 was a tailless flying wing design which would later on influence the design of Northrop XB-35, YB-49 and the B-2 Spirit Bomber. The design of the 229 was shaped by its engine the Junkers Jumo 004B turbojets which could propel any aircraft at high speed but would limit the range because of its fuel guzzling nature. It was decided that a flying wing design would significantly reduce the drag lowering the power needed ultimately reducing the fuel consumption. The construction of the aircraft was mixture of steel and wood. The wings were made up of two carbon impregnated plywood. The aircraft was designed to withstand a 7G load factor and was controlled by elevons and spoilers.
The performance of the aircraft was never tested to its limit but it was estimated it could fly at speed 1024 kmph at range of 1900 kms and altitude of 52000 feet's. 229 also carried two 1000 kg bombs and two 30mm cannons. The first glider prototype flew on 1st March 1944, another prototype with engines flew in February 1945. A prototyped crashed killing the pilot but the testing work on the aircraft continued. Stealth was achieved using charcoal and sawdust glue which absorbed the electromagnetic waves of British early warning radars. The flying wing design was also inherently known to reduce the radar cross section. The theory was tested by Northrop Grumman in 2008 and proved that the aircraft had 40% less radar signature.
The aircraft had the potential to win the war but like the Me-262 and many other German weapons it came too late to save the Hitler's Germany. The aircraft was captured by the Americans under the Operation Paperclip which was meant to capture all the German technological advances before the Soviets did. The captured airframes were sent to Northrop Corp for further study. Two surviving prototypes are currently in US.