The Chief Minister of Manipur, N Biren Singh , has created a political storm of sorts by inaugurating the Zou Gal Memorial Cemetery on December 19 at Behiang, an important trading outpost on the India-Myanmar border, and also laying the foundation stone for the Maharaja Chandrakirti Memorial Park at Chibu (locally known as Chivu) around 2 km away from Behiang.

Intended to commemorate the valour of 94-odd Zou martyrs who sacrificed their lives fighting against the British attempt to forcibly deploy them as labour corps during World War I, the memorial was intended to symbolise the independence and lordship of the Zo people over their land. On the other hand, Chivu and the name of Maharaja Chandrakirti Singh evoked a sense of betrayal of trust among the local people. This is because one of their powerful chiefs, Go Khaw Thang, died in 1872 in jail after he was ‘treacherously seized’ — to borrow words from Brigadier General Bourchier, commander of the Cachar Column of the Lushai Expedition (1871-1872) — on March 7, 1872 at Chivu camp by Chandrakirti’s soldiers led by Majors Thangal and K. Balaram Singh. The 2000 Meitei soldiers were enlisted by Major General Nuthall, the then officiating Political Agent of Manipur, as a part of the Cachar column.

In a distortion of historical facts, the Chibu Stone Inscription, subsequently commissioned by Chandrakirti, commemorates the successful completion of the British expedition as if it was a victory of the Maharaja over the tribals. Interestingly, the three stone slabs (each edifying the Maharaja, Nuthall and the two Meitei majors) are being used as a marker of the Maharaja’s, and by extension, Manipur’s border. This amounts to over-stretching the imagination as no Meitei king ever succeeded in extending their border and control over the ‘ferocious’ and ‘independent’ tribes beyond Moirang town, a fact supported by all colonial and local oral historical accounts. The state has given protection to the site in Chivu where the inscription was placed by passing an order in 1990 and included the inscriptions among the 49 monuments protected under the Manipur Ancient and Historical Monuments and Archaeological Sites and Remains Act, 1976. The Archaeological Survey of India seemed to be oblivious to these spurious facts when it accepted this problematic version in one of its publications titled Indian Archaeology 1987-88: A Review edited by its then director M.C. Joshi in 1993 (p.120).

Possibly mindful of the past which continues to inform hills-valley relations in Manipur, neither the State nor the ASI has ever attempted to invoke the name of Maharaja Chandrakirti. In his attempt to develop the site into a tourism park as part of the larger exercise to develop Behiang and Chivu as the “second gateway to Southeast Asia” under India’s Look East Policy, Mr. Singh not only ignores this historical fact but also panders to majoritarian nationalism. In the process he opens up an old wound and hurts the sentiments of the Zo people.

Given that Chandrakirti was not particularly known for his successful military exploits, but for his cowardice and treachery in dealing with the Zo people along the India-Myanmar border, invoking his name would not be particularly useful for Mr. Singh in winning the hearts of the tribal people. His Facebook post about the laying of the foundation stone of Chandrakirti Park elicited mixed responses. While some applauded Mr. Singh for this bold gesture and already proclaimed him as a Meitei ‘nationalist’, ‘patriot’ and ‘hero’, tribals castigated him for his ‘insensitivity’ and asked him to ‘apologise’ to the hill people.

Rumblings in the various local social media indicate that the issue will not disappear any time soon. If Mr. Singh genuinely believes in Ching-tam Amani (hill-valley are one), he will need to respect and honour the Zo people in particular and the hill tribal people in general both in words and deed. The big question is whether Mr. Singh can navigate his politics in ways which would be capacious enough to transcend mere symbolism and genuinely accommodate tribal icons, sensitivity and autonomy aspirations or whether he will be increasingly integrative/assimilationist by embarking upon a majoritarian path. Time will tell.


The history of the growth of political process in Arunachal Pradesh dates back to 1875 when the British-India Government started to define the administrative jurisdiction by drawing an Inner Line in relation to the frontier tribes inhabiting the North Frontier Tract, the area was kept outside the purview of regular laws of the country. Thereafter, the British followed the policy of gradual penetration to bring more areas under normal administration. By the year 1946, the North East Frontier Tracts were reorganized into four Frontier Tracts namely Sadiya, Lakhimpur, Tirap and Sela Sub Agency and Subansiri area and administrated by the Governor of Assam in his discretion.

Indian nation is aware by the name Bengal province and this North East Frontier Agency term is because of the geographical location.

The Union Minister of State (Independent Charge) for Development of North Eastern Region (DoNER), MoS PMO, Personnel, Public Grievances, Pensions, Atomic Energy and Space, Dr Jitendra Singh has said 2017 has been a watershed year for the North-Eastern Region (NER), for it not only witnessed some of the landmark developmental initiatives, but will also go down in the history as a year when the Union Government took some such decisions which had been pending for decades together.

Briefing the media after releasing the North Eastern Council (NEC) wall - Calendar and table - Calendar for the year 2018, Dr Jitendra Singh said the 90-year-old "Indian Forest Act of 1927", which was a legacy of the British Raj, was amended through a decision of the Union Cabinet chaired by the Prime Minister Shri Narendra Modi, as a result of which "Bamboo", which was defined as a "Tree" under the Indian Forest Act of 1927, was changed, thereby doing away with the requirement of obtaining a permit for felling of bamboo for economic use. This, he said, is going to be a game-changer for generations to come, by opening new avenues of job generation and entrepreneurship by allowing bamboo cultivation and bamboo use by non-farmers on non-forest land.

Majuli Island is surrounded by the mighty Brahmaputra River on the south, Kherkatia Suti, Luit Suti and Subansiri Rivers on the North and is susceptible to both floods and erosion almost every year. The geographical area of Majuli Island was 733.79 sq. km. in the year 1914 as per the Survey of India Map. The twin problems of flood and erosion reduced the geographical area to 502.21 sq km in 2004. In the sixties, Government of Assam constructed embankment to protect the island from floods, however, these embankments could offer marginal protection from flood as breaches occurred in many places. Erosion continued every year eating away precious land mass and shrinking the area of the island. On the request of Government of Assam, Union Water Resources, River Development and Ganga Rejuvenation Ministry entrusted the Brahmaputra Board the task of ‘Protection of Majuli Island from Flood and Erosion’ in 2003. 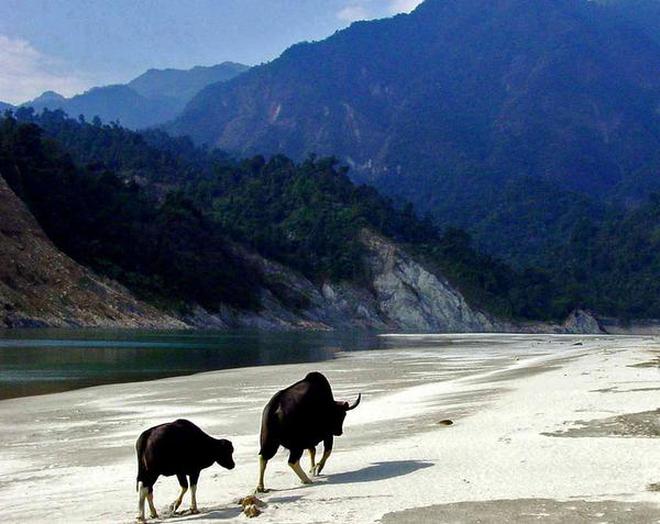 Dark episode: On the banks of the Siang river in Arunachal Pradesh.

The Union government has conveyed its views and concerns to the Chinese authorities, including at the highest levels of the government, on the unusual darkening of the Siang river in Arunachal Pradesh, Union Minister of State for Water Resources Arjun Ram Meghwal said in reply to a question in the Lok Sabha on Thursday. The change in colour came to light in November, and China holds an earthquake in Tibet responsible for it.

Official reports of the colour of water in the Siang changing emerged from the Arunachal Pradesh office of the Central Water Commission (CWC) on November 10, attributing it to excess silt. What caused a deluge in silt however was not specified, but the water at Tuting was still potable, the CWC said.

However another report from the Arunachal Pradesh Water Supply Department showed that iron levels were beyond permissible limits and samples from the river beyond Pasighat and Jonai showed higher aluminium and iron levels. A public outcry prompted leaders, including Chief Minister, Pema Khandu, to write to Prime Minister Narendra Modi to launch a thorough investigation.

“The reason for change in water of River Siang may possibly be because of any landslide/earthquake/any other activity in upstream region of Tuting site across the international border with China for which information is not available. Exact reason is not known as yet,” Mr. Meghwal told the House.

The Siang enters India from Tibet, where it flows for about 1,500 km as the Tsangpo and becomes the Brahmaputra after it flows into Assam.

Reports from Arunachal Pradesh and Assam blamed tunnel construction by China in Tibet. India nevertheless broached the issue with Wang Yi, Foreign Minister of the People’s Republic of China, during his visit to India on December 11, 2017, Mr. Meghwal said in his reply. “Government has conveyed its views and concerns to the Chinese authorities, including at the highest levels of the Government of the People’s Republic of China, and has urged them to ensure that the interests of downstream States are not harmed by any activities in upstream areas,” he said. 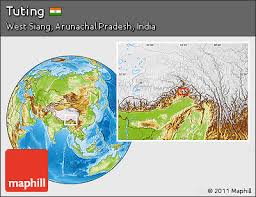 Students oppose Centre’s plan
The All-Arunachal Pradesh Students’ Union has made it clear to the Centre that people of the State will not accept citizenship to Chakma and Hajong refugees at any cost, an AAPSU release stated on Friday.

The students’ body attended the Joint High Power Committee meeting on the vexed Chakma-Hajong issue in New Delhi on Thursday, which was chaired by Joint Secretary (Northeast) Satyendra Garg, the release said.

AAPSU president Hawa Bagang told representatives of the Union Home Ministry that citizenship to the Chakma-Hajong refugees “will never be acceptable to the people of Arunachal Pradesh”.

He also highlighted the “atrocities committed by the refugees against the indigenous people” and doubted the Centre’s “sincerity in resolving the issue”, the release said.

The student body’s general secretary Tobom Dai told the Chakma-Hajong delegations, that also took part in the meeting, to consider citizenship outside the territory of Arunachal Pradesh without preconditions.

“Unrelenting attitude (of the Chakma-Hajongs) asking for citizenship within Arunachal Pradesh will boomerang and the people of the State will never accept it,” Mr. Dai said.

The meeting was convened as a follow-up to AAPSU’s demand in June last year here, seeking an early solution to the contentious refugee issue, the release added.

An all-party meeting convened by CM Pema Khandu on June 19, 2017, had decided to move the Union Home Ministry to revive the Joint High Powered Committee on the refugee issue.
You must log in or register to reply here.
Similar threads
DFI Member research into the Origins of Indian ancient history
Why US invest $ 1.2 billion, the largest expense in history to build a new embassy in Vietnam?
A Brief History of Indian Orbital Rockets
Canada’s mass graves and history of persecution of indigenous population in the western world.
Share:
Facebook Twitter Reddit WhatsApp Link