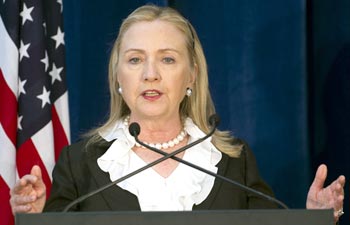 US Secretary of State Hillary Clinton has lauded India as an important player in the Indo-Pacific region and has also urged New Delhi to play a larger role in the region's affairs.

"We've made it a strategic priority to support India's Look East policy and to encourage Delhi to play a larger role in Asian institutions and affairs."

"It's exciting to see the developments as the world's largest democracy and a dynamic emerging economy begins to contribute more broadly to the region," Clinton said in her speech at Perth's University of Western Australia.

"It's also important to see the burgeoning relationship between Australia and India," she said.

Hilary Clinton, who is in Perth for high-level talks with Julia Gillard-led government, also applauded the upswing in Australia's bilateral ties with the "world's largest democracy" India. She has encouraged Australia to increase military co-operation with India.

Clinton's Perth speech at University of Western Australia has been noted by the political pundits as another step towards forming of a tripartite alliance between her country, India and Australia.

"We would welcome joint Australian-Indian naval vessel exercises in the future and we are eager to work together in the Indian Ocean Rim-Association for Regional Cooperation (the organisation of 19 Indian Ocean rim countries) which Australia will chair in 2013 and which the United States has now joined as a dialogue partner," Hilary Clinton said.

"Increasingly, these waters are at the heart of the global economy and a key focus of America's expanding engagement in the region- what we sometimes call our pivot to Asia," Clinton said while referring to the importance of Indian Ocean in the international affairs.

"We look for ways to support the peaceful rise of China, to support China becoming a responsible stakeholder in the international community," she said.

"And (we) hope to see gradual but consistent opening up of a Chinese society and political system that will more closely give the Chinese people the opportunities that we in the United States and Australia are lucky to take for granted," Clinton added.

The US secretary of state's sentiment on India was shared by her Australian counterparts too.

"I've been an advocate and an arguer of the point of view that India is on the rise, the strategic importance of the Indian Ocean is on the rise," Australian Defence Minister Stephen Smith said while addressing an University of Western Australia audience.

"It's also important to see the burgeoning relationship between Australia and India," she said.
Click to expand...

Our sincere thanks to you !
W

Hillary may be leaving, to be by Susan Rice, who is currently the US ambassador to the UN?
You must log in or register to reply here.
Similar threads
Hillary Clinton to Announce Presidential Run.....
Hillary Clinton visited Delhi to convince India on Iran
Hillary Clinton praises China's 'pragmatic' President Xi Jinping
Hillary Clinton to charge $200,000 per speech
Share:
Facebook Twitter Reddit WhatsApp Link