Here's How Israel will Attack Iran

No that's wrong Known-Un, we do understand them and have made sure Israel has the right tools to do the job.

Here they come. They are taxiing out now.
A

Known_Unknown said:
Anyone who knows modern Iran's history knows why they are so defiant. The US and UK collaborated to stage a coup against the first elected government of Iran. Then they installed the Shah, who was a puppet dictator, and did everything that the west wanted. Then they supported Saddam in his ten year war against Iran which killed nearly a million Iranians. And they've put sanctions on them ever since the Islamic Revolution took place.
Click to expand...

Ok, and how does that effect the affect a nuclear armed Iran will have on ME ?

The Iranians have been persecuted by the west for its own ends. Secondly, Iran is not North Korea. They see themselves as the inheritors of the Persian empire and thus hold ambitions of being the major power in the Middle East.
Click to expand...

Egyptians, Saudis, Lebanese, Syrians, the whole lot consider themselves inheritors of one thing or another, every country in the ME has ambitions of being a major power, whats your point?

Unlike the Arab barbarians, and they see themselves as having a glorious history and civilization that had a profound impact on the world. So they want a role in the modern world that corresponds to and is worthy of their past achievements.
Click to expand...

:| Perhaps the "Arab barbarians" don't think so. Nor the Cancerous Zionists. Nor half of the civilised world.

Maybe Mongolia or Macedonia should have a role corresponding in the modern world to its glorious history and past achievements that had a profound achievement on the world.

Many Americans, Australians and folks in the new world fail to understand these sentiments. But they're shared by most countries that achieved greatness in the past.Most Indians and Chinese think the same way.
Click to expand...

Yes because Yankees and Chainshakers never achieved any greatness in the past and are obviously too dumb to understand the sentiments of civilisations superior than their own.

( P.S. - Mr. second-cell-to-the-right-Sailor, please forgive my foray into harsh irony that may upset your gentle disposition )

Also, with great power comes great responsibility. To achieve that great power status, it has to be earned from the international community, and that is what Iran is trying to do, irrespective of the lunatic comments of its elected President.
Click to expand...

Ok now that the Iranian Prez is irrelevant, lets move on to what people here call the real power base, the responsible Ayatollahs , who should be ideal for dialogue ...... if only the Americans were not sub-human I mean -

"'If America Was A Human Being, We Would Talk With It' - But You Are Not Human Beings, And This is the Same Nation It Was 30 Years Ago... And [Therefore] Say: 'Death to America!'" MEMRI: Latest News

Another big mistake is to say that the only way to save the Palestinian nation is by negotiations," Khamenei said.

"Negotiations with whom? With an occupying and bullying regime, who does not believe in any other principle other than force? ... Or negotiations with America and Britain who committed the biggest sin in creating and supporting this cancerous tumor ... ?" he added.


When Iranians say they want peace and prosperity, unlike China, I think they mean it.
Click to expand...

When Iran says they want to wipe Israel off the face of earth, I think the Israelis believe it.

Iran hasn't instigated a war in its short history, and it's unlikely to do so in the future, especially given the presence of US bases in that region.
Click to expand...

When aiming for a power base, Iranians are inheritors of Persian empire, when it comes to warfare, only its short history should be considered, and even then, border battles with Iraq in 70should be immaterial, the Iran-Iraq war should be considered US's fault, the arming and encouragement of Kurdish rebels should not be taken as a hostile gesture, Iranian Seizure of Gulf Islands claimed by UAE should be considered a minor affair, The Tanker War had no instigator, ok maybe Iraq but not Iran certainly, Iran's open support of Israeli enemies shouldn't even figure in because it isn't a "war" and it should be assumed that Iran will also not instigate a war in future, given their exalted leadership will become even more logical once they have nukes.
S

Yeah well you'd better get down. Here they come Auberon said:
Thats the thing, when Iran gets nukes, everyone in the ME will want nukes next, and theres trouble enough there already.

Today yes, because today its not in that advanced a stage of nuke developement, but when it does eventually reach that stage, USA will have a very strong reason to attack it, Israel will have stronger.

That I agree with completely, instead of the righteous BS.

Israel and USA are not afraid of the Iranian Nuclear capability in terms of Iran using that capability to launch nuclear attacks on either of them (through missiles or more covert methods).

The situation in the region will become complicated due to Iran's nuclear capability, and that is why Israel and USA will not allow Iran to achieve this capability, and it will be something in which many of Iran's neighbours (Turkey, Saudi, UAE etc. etc.) will collaborate with them.
S

Re fueling before the final bomb run. Take cover. 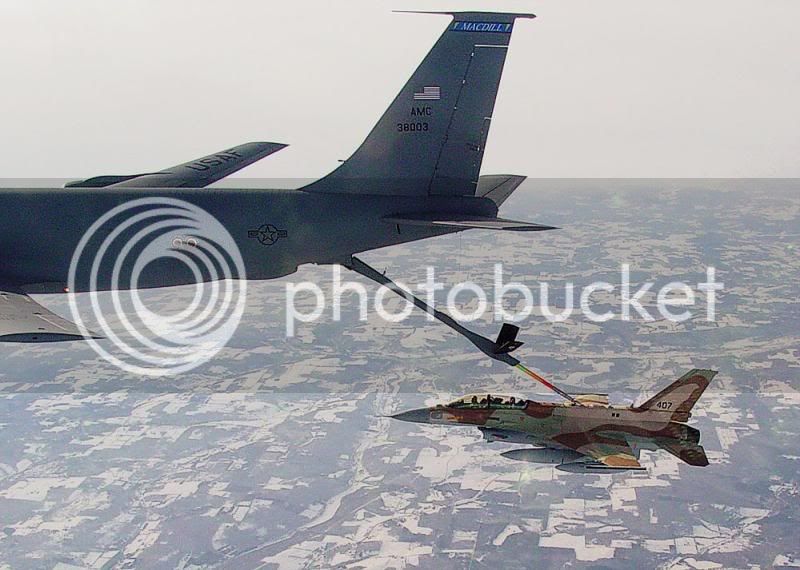 Auberon said:
Pintu,
Iranian nukes will primarily have a coercive impact on Persian Gulf countries. By effectively portraying himself as a crazy guy, Ahmadinejad creates the impression he cannot be deterred.

Iran's expansion is NOT in the rest of the world' interest.Iran's strategic success so far has been its ability to frame its nuclear program as a threat to Israel, rather than to the Persian Gulf and thus a considerable part of the world's oil supply. They have achieved this primarily through the bellicose rhetoric of the holocaust denying Ahmadinejad--and at virtually no cost.
Click to expand...

I simply did not talk about Iran's nuke, as this is not clearly proved that if they have N-weapon , either claims by the western nation , (I am not biased to any nation or supporter of any head of the state if he commits any crime ) or media what I simply wrote about Iran's Nuclear Installation ( I meant the Nuclear plants for production of N-power ) , and the interest of regional power means that Russia, China and India particularly depends on Iran on energy issue and Geo strategic reason and same way mostly two of three (India. China) depends Israel on Defence Technology and they will likely to be active to avoid this.

Yusuf said:
If you compare, the Iranians play a game similar to the one played by North Korea. One of belligerence at one time and one of conciliation at another. That helps them buy time and also extract concessions from the big powers.
Iran is emboldened by the fact that the US does not even dare to think of attacking North Korea and thinks if it adopts the same strategy, it will keep the US from attacking Iran.
Click to expand...

Bush may call Iran - Pongyang the "axis of evil", but the two are vastly different. US can bomb NK to the stone age if they want, but they are not doing so because of China. China is strongly against military action against NK. Why because if NK opens the gates, millions of refugees will enter China, and China is not in a position to allow so.


Without making it overly complicated, I would think of a simple hypothetical scenario.

In the past, if we knew that Pakistan had ambitions to building a nuke,or were trying to do so, (mind you, there is no proof that Iran is trying to build one), what should we have done?

Israelis had offered to take out pakistani nuclear installations if they could use our airspace and we refused the offer.

LETHALFORCE said:
Israelis had offered to take out pakistani nuclear installations if they could use our airspace and we refused the offer.
Click to expand...

I said "what should we have done"

Kommunist said:
I said "what should we have done"

we have done nothing and we also prevented others from doing something,so i don't think our politicians would do anything different if the chance to go back and change this was available. The answer is obvious destroy their facilities.

The United States itself, he said, had not discussed (with Israel) "pre-emption plans."

The declassified paper provides no further details but it is known that AQ Khan, Father of the Pakistani nuclear bomb , and others had described Pakistan's nuclear bomb as an "Islamic bomb" and rich Islamic countries like Saudi Arabia and Libya reportedly provided financing while China provided technical aid , nuclear materials and a design for the bomb.

Blueprints stolen by Khan from the Netherlands enabled Pakistan to build centrifuges to refine uranium to bomb-grade.
S

LETHALFORCE said:
Israelis had offered to take out pakistani nuclear installations if they could use our airspace and we refused the offer.
Click to expand...

probably showing my ignorance here - i have never heard of it before. When was it? and could you point me to some more reading about it , thanks.

Was India denying airspace or uncle SAMs intervention? I think India was with Israel. All the Israel wanted was some fuel

There are lot of fundamental facts in this article that has been ignored/missed:

1. Israel vs Muslims/Arabs: Israel does not like Muslims and all Muslims hate Israel. This is a universal fact irrespective of wealth/education on either side. Lets get the facts straight. Israel as a country has survived in this world because it has N bomb while the Arab world does not. Iran is developing the N bomb only to attack Israel. It is not developing it to attack the fellow Arab neighobour countries. If Israel allows Iran to develop the N Bomb then within some months Syria, Turkey, Lebanon and even Palestine will have it. This is a dangerous scenario and Isreal will never allow it.

2. There will be no war between Israel and Iran. It is always going to be between Isreal + America vs Iran. If America is involved none of the Arab comtries will get involved. Chineese and Russians will create some noise but even that voice will be silenced. This is not an assumption but a fact which we saw in the Iraq war.

3. Israel has already pushed the Iran's N pgm back by few years by the Stunext Virus.

4. The final and the most imp point- MOSSAD. In the 6-day war, Israel destroyed the entire Egyptian Airforce within half an hour break (Between the shift change of guards). This was possible because of MOSSAD.

View this link http://www.youtube.com/watch?v=E63AKJpa1Tk
Last edited: Jan 13, 2011
You must log in or register to reply here.
Similar threads
The Latest AK-Alfa Prototype Is Here – The Future of Israel’s Kalashnikov?
ATTENTION!! - Please be extremely aware and be careful of what you post here.
Here’s how many foreign military sales the US State Department OK’d in FY19
You’ve heard stories of Indian Army and Air Force heroes. Now here’s an angel from the Navy
Share:
Facebook Twitter Reddit WhatsApp Link