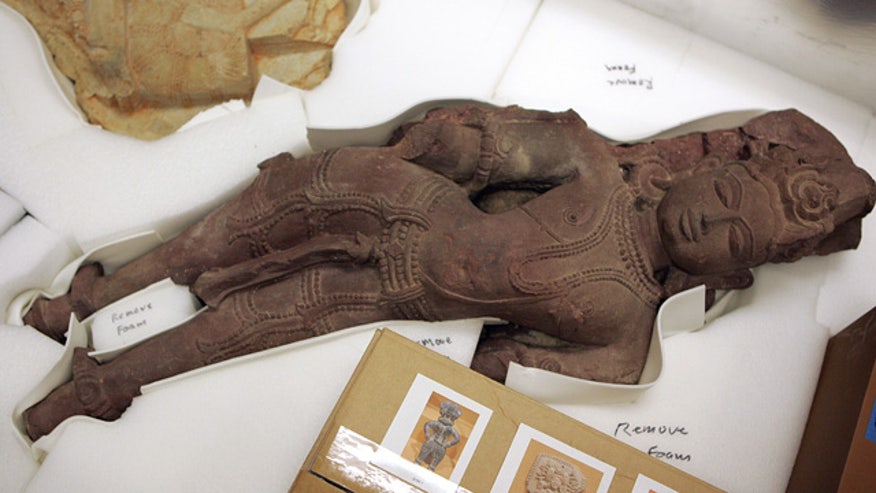 March 31, 2015: One of seven stolen artifacts that were on display at the Honolulu Museum of Art is shown in a secure room of the museum's basement. (AP Photo/Caleb Jones)
Click to expand...

HONOLULU – An international investigation into antiquities looted from India and smuggled into the United States has taken authorities to the Honolulu Museum of Art. The museum on Wednesday handed over seven rare artifacts that it acquired without museum officials realizing they were ill- gotten items. Agents from the U.S. Immigration and Customs Enforcement will take the items back to New York and, from there, eventually return them to the government of India.
U.S. customs agents say the items were taken from religious temples and ancient Buddhist sites, and then allegedly smuggled to the United States by an art dealer. The dealer, Subhash Kapoor, was arrested in 2011 and is awaiting trial in India. Officials say Kapoor created false provenances for the illicit antiquities. Someone on vacation visiting the museum last year recognized the name of Kapoor's New York gallery as the source of a 2,000- year-old terra cotta rattle and contacted authorities, said Stephan Jost, the museum's director. Museum officials then pored over their records and determined six other Indian items had ties to Kapoor. Kapoor donated one of the items and sold five to the museum, Jost said. One was a gift from someone else.

Re: Hawaii art museum returns 7 artifacts found to be smuggled from In

So why not take away his citizen and ban him from country?
You must log in or register to reply here.
Similar threads
U.S. prepares for awkward military engagement with China in Hawaii
New Chinese submarine patrol puts Hawaii, Alaska within nuke range
Researchers in Hawaii find lost Japanese WWII mega-sub
China Claim to Territorial Rights in Hawaii
Share:
Facebook Twitter Reddit WhatsApp Link