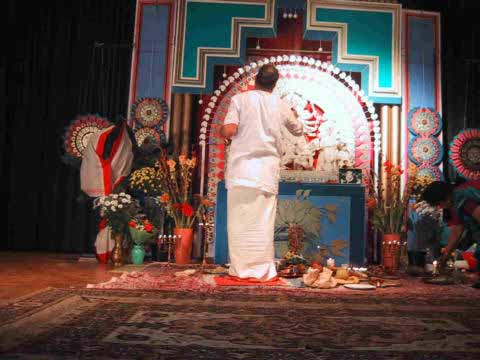 Suvo Durgapuja 2009, to all , may this auspicious occasion bring peace, prosperity, happiness to everybody, saning religion , cast , creed and geo political divide.

Happy Durga Puja, Navratara to all.

Happy Durga puja to all.

Wishing all a joyous festive season

Far from the hurly-burly of politics, Finance Minister Pranab Mukherjee [ Images ] plays another role at this time of the year -- that of a priest worshipping Goddess Durga [ Images ].

"The puja is around 100 years old. Pranab's grandfather late Jangaleswar Mukherjee started the puja," said Goutam Roy, who has been looking after puja arrangements for the last couple of years.

"After him, Pranab babu's father Kamadakinkar Mukherjee continued the puja. Pranab babu is keeping the tradition alive," he said.

Mukherjee himself performs the puja on Maha-astami Puja, the second day of the four-day festival, with thousands of people -- including family members, villagers, and party workers -- visiting Miriti.

Like previous years, this year too Mukherjee is scheduled to reach his home at Miriti, a hamlet near Kirnahar for the puja. Last year, Mukherjee flew to the Panagarh air base and drove down to Kirnahar.

Asked about Mukherjee's visit, District Magistrate Bisweswar Maity said, "He has Z category security. We have made the required arrangements."

Superintendent of Police Rabindranath Mukherjee said, "So far we have not received any special instructions. But our officers are keeping a watch. They will be in touch with Pranab Mukherjee's family members."
N 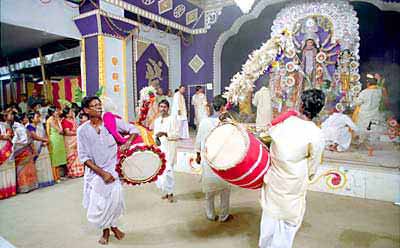 Durga puja is celebrated in the autumn months of September/October. According to the Hindu solar calendar, it falls on the first nine days of the month of Ashvin. Most of the religions follow either a solar calendar or a lunar calendar. For the Hindus, it is a combination of both. The days are counted on the basis of sun rise and sun set. But timings of all religious functions are based on the lunar month. The lunar month is divided into two halves, the full moon phase and the new moon phase.

Accordingly the religious functions of the Hindu Bengalis are scheduled in sync with the timings of the moon's movement, better known as 'Tithhi'. The schedule of Durga Puja is also framed on the basis of the 'Tithhi'. The Devi Paksha or the fortnight in which the Puja falls sets in with the auspicious of the Mahalaya, which falls on the New moon. Mahalaya heralds the homecoming of the Mother Goddess as the tunes of Agamani fill the air.

The four days of Pujas start from the sixth day of the full moon phase that follows the Mahalaya and ends up with the Dashami or the tenth day. Thus Dashami is four days short of the full moon night, called Kojagori Purnima. For, it is on this pious night the Kojagori Laxmi Puja is performed by most of the Bengali households.
source
1

On the occasion of 'Nav Raatri' or the festival of Nine Nights, culminating in the triumph of good and the destruction of evil in the ritual conflagration of Dussehra, a few traditional videos:


The first is a traditional warrior dance called the Kath'iyawadi Ras, performed in Gujarat at the Sanskrutikunj, Gandhi Nagar city. Suggested to watch in full:

The second is a Garba Ras performed by a few young 'uns in Ahmedabaad city. The Garba Ras is a traditional dance performed in concentric rings around the image of the Goddess Amba Devi as an act and an object of veneration:

And some more Garba Raas fun among the urban youth in the city of Vadodara:

This is the traditional 'Mer' or Sword Dance performed by the warrior Rajput clans of Rajasthan and the warrior clans of the Maher and others of Gujarat:

^^^
I highly recommend the watch even if it's not embedding here.​

This is a video of the (now famous) Shri Atul Purohit, legendary for his cermonial crooning at Dandiya and Garba Ras celebrations alike, doing what he does best at the 2007 Baroda 'Garba Queen':

This is a video presentation of the 'Hudo Raas' or Shepherd's Dance performed by the traditional Bharwads or Shepherds of Rajasthan and Guajarat (as part of the: "Gujarat, A Celebration" matinee, 2007):

I am posting some images I have captured using my Mobile Cam (Res: 2 MP) and friend's Digi Cam. This one from my hometown:

and though both are same quality differs on res support: