HAL choppers get defence ministry nod in bid to replace Cheetah & Chetak, Kamov hangs in balance
New Delhi: The Ministry of Defence Tuesday approved the procurement of 12 Light Utility Helicopters (LUH) from state-run Hindustan Aeronautics Ltd (HAL), a government statement said. The move will finally pave the way for the replacement of the ageing Cheetah and Chetak fleet of choppers.

These 12 new choppers will come under a limited series production configuration even as India’s overall demand for LUHs, meant for transportation of men and supplies to high-altitude areas besides evacuation and reconnaissance, is estimated to be over 400.


While HAL is expected to meet at least half the total requirement, Indo-Russian Helicopters Ltd (IRGL), a joint venture between HAL and two Russian firms, Russian Helicopters and Rosoboronexport, will meet the rest. IRGL will manufacture Russian Kamov 226T helicopters in India.

However, the agreement for this joint venture product, which was the Modi’s government’s first government-to-government deal in 2015, hangs in balance over indigenous content and cost.

HAL’s own project to supply the armed forces with LUH is expected to gather steam as the approval by the Defence Acquisition Council, which is headed by Defence Minister Rajnath Singh, paves the way for a formal contract.

Sources in the defence and security establishment told ThePrint that the nod for 12 choppers, six each for the Army and the Indian Air Force, looks small but it is under limited series production.

“The first LUH will be delivered in August 2022 after which the forces will use them and will give their feedback and place further orders,” a source explained.

Sources said the ministry needs to clear Acceptance of Necessity for 175 more LUHs, a proposal that is pending. It is feared that without a sufficient order in time, capacities would idle and production would see delay due to non-availability of critical items.

Sources said the LUH has cleared all trials including in high-altitude regions like Ladakh during the ongoing stand-off with China. “The LUH has met all requirements of the armed forces as per what they sought. The production has already started at HAL’s new helicopter factory in Tumakuru in Karnataka,” a second source said.

These choppers will replace the Cheetah and Chetak fleet of helicopters that were designed in the 1960s.

LUH capable of high altitude operations
Even though the Cheetah and Chetak choppers are old and prone to crashes and high maintenance, they are a crucial lifeline for the armed forces, especially in high-altitude areas like the Siachen Glacier.

The LUH, which had received the Initial Operational Clearance for the Army from Centre for Military Airworthiness and Certification earlier this year, is powered by a single turbo shaft engine Ardiden 1U from Safran Helicopter Engine, France.

It has a service ceiling of 21,325 ft and a range of 500 km with internal fuel tanks. Capable of a maximum speed of 235 kmph, the two-crew helicopter has a maximum take-off weight of 3150 kg.

The LUH is also equipped with Smart Cockpit Display System (glass cockpit), health and usage monitoring system and is designed for various utility and armed roles. 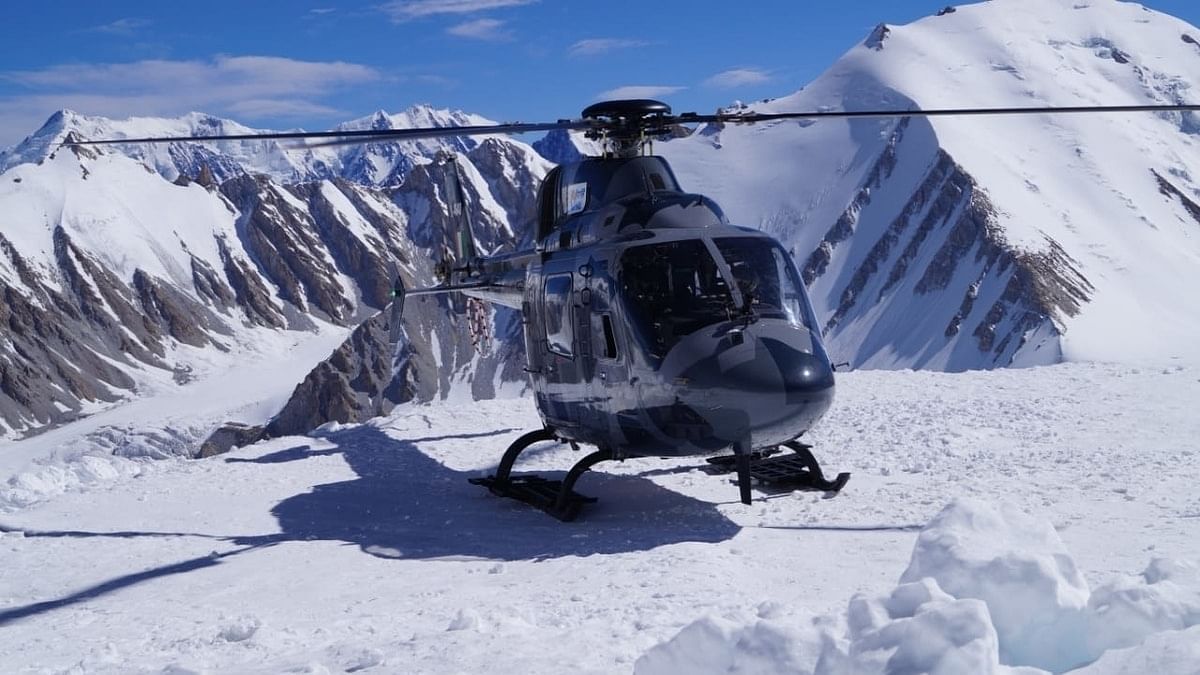 The 12 helicopters, six each for the Army and the IAF, will be delivered in August 2022.

1st LUH to be delivered by August

LIGHT UTILITY HELICOPTER COULD BE PERFECT REPLACEMENT FOR AGEING CHEETAHS, CHETAKS
ARUP CHATTERJEE VIVIDLY remembers that freezing Leh day from more than two years ago. As director (engineering and R&D) of Hindustan Aeronautics Limited (HAL), he was in Leh for the cold weather endurance test of the light utility helicopter (LUH) prototype.

His team’s task was to fly the LUH to a helipad at 17,000ft, leave it exposed there for 24 hours (at -30° Celsius), and check whether the chopper was still fit to fly. The team landed at the helipad, but was grounded for two days because of rough weather. “We were worried whether the helicopter would start,” Chatterjee. “If it did not, bringing it back would have been difficult. To our surprise, even after being exposed to such a harsh environment for 48 hours, the helicopter started. It told us that we were on the right track.” 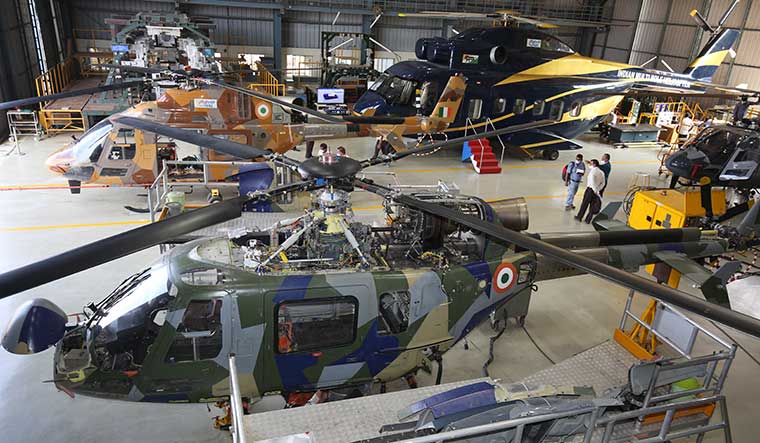 Ready To Soar: The final assembly hangar of the light utility helicopter at HAL, Bangalore

From its manufacturing base in Bangalore, Chatterjee and his team flew the prototype to Leh, instead of sending it on a C-17-Globemaster transport aircraft. “We flew to Leh with breaks in between. The LUH flew for 6,000km without any fault,” he said. “At a stretch, it can fly for around 400km to 500km. Helicopters are, however, not meant for long-haul flights.”

The LUH is expected to replace India’s ageing fleet of Cheetah and Chetak helicopters. Though designed and developed indigenously, the single-engine LUH is powered by the Ardiden-1U engine from Safran, the French aerospace major. The first LUH will be delivered in August 2022, on the occasion of the 75th Independence Day. “The LUH can operate at 20,000ft above sea level. It has a glass cockpit and dual controls,” said Girish Linganna, aerospace expert and managing director, ADD Engineering India. “Its single Safran Ardiden-1U turboshaft engine has seen big success and has been made to world standards.”

Most of the Himalayas and the inhospitable areas in the northeast are now being served by Cheetahs and Chetaks manufactured by HAL under a transfer of technology deal with France, inked in 1974. HAL has produced more than 600 Cheetahs and Chetaks; 415 are still in service. Thanks to ageing and obsolete technology, the fleet is on its last legs. In 2004, a requirement of 384 helicopters was raised. After a feasibility study, HAL confirmed that it could produce a utility chopper as it was already rolling out the advanced light helicopter (ALH). 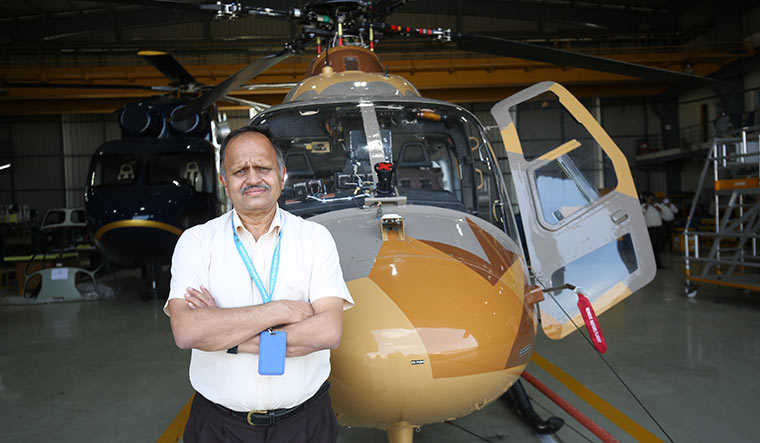 “After a lot of deliberation, it was decided that of the required 384 helicopters, 197 will be procured directly from foreign vendors and 187 will be made by HAL. The Army and the Air Force wanted a single-engine helicopter. We got the Cabinet Committee on Security’s sanction in 2009. We were not inspired by any international helicopter. We were confident about our capability to design and develop a helicopter,” said Chatterjee.

The ALH and the LUH, however, are entirely different. The 5.8-tonne ALH can carry up to 14 passengers, while the three-tonne LUH is designed for six. The LUH can land in small helipads in high altitude stations like Siachen and Leh. The ALH, however, needs bigger helipads. The LUH’s top speed is 240kmph, but it can only carry around 75kg at the peak of its operational ceiling. But it is an improvement on the Cheetah and Chetak, which can carry only 30kg to 40kg. “We aim to increase the LUH’s capacity, but nothing has been finalised, yet,” said Chatterjee.

Designing and developing the LUH came with its own challenges. Developing the rotor and the transmission was one. “In aerospace technology, the design and development of a helicopter is much more complex than that of a fixed-wing aircraft. The LUH has a two-segmented rotor. It is unique in this range as the rotor can be folded, unlike in the ALH. No other helicopter in the three-tonne category has this capacity,” said Chatterjee. The foldable rotor adds to the storage space.

The gearbox of the LUH was developed by Microtek, Hyderabad; the transmission is by HAL. “It is the reason the project took a lot of time. Now we have mastered the art of designing the rotor and the transmission system on our own and this gives us the confidence to build future helicopters, such as the multi-role helicopter, without any foreign collaboration,” said Sreenivasa Rao Dunna, deputy general manager at HAL’s rotary wing research and design centre. “Over a period of time, the LUH will have more than 60 per cent indigenous content.” The tail rotor shaft, which used to be imported, was developed by HAL for the project. The ring gear, once imported from the UK, is now being manufactured by Shanthi Gears, Coimbatore.

Developing an indigenous engine still remains a challenge. “We will have our own engine in the next five years. Initially, we thought we could use the ALH’s engine (Safran Ardiden 1H1). However, when the LUH was being designed, we realised that the same engine could not be used. Safran was asking for a huge amount for modification. So, we went for tendering. Safran won it, but the total cost came down because it was a competitive order,” said Chatterjee.

It took Safran more than three years to supply the engine as several specifications such as engine power, rotor capability, hover capability, rudder margin and manoeuvring capability had to be addressed.

Then came the indigenisation of the avionics and multi-function displays. These systems were earlier sourced from Israeli, which meant that there was a fat fee for every software update. So, HAL developed the software and sourced the hardware from Data Patterns, an Indian company based in Chennai.

“Software requires continuous development as it has to be upgraded from time to time,” said Chatterjee. “The control panel of the LUH was developed by another Indian firm. The aim is to make an ecosystem for the LUH. Then there is the armour panel, which was developed by a Delhi firm. The lubricating pump and standby displays, too, were developed by Indian players.” The LUH has many crashworthy features which provides protection for aircrew in case of an accident.

So far, three prototypes of the helicopter have been made. The first flew in September 2016, the second in May 2017 and the third in December 2018. HAL has also made a ground test vehicle (GTV), which does not fly. All systems are tested on the GTV before those are put on the helicopter. HAL has also completed sea trials and hot weather trials.

Another challenge that HAL faced was the shortage of integrated circuits that are imported from Taiwan and other countries. “Once semiconductor manufacturing picks up in India, then we can aim towards a higher level of indigenisation. The manufacturing facility in Tumakuru near Bengaluru is expected to be operational soon. More than 100 designers are currently working on the project,” said Dunna.

HAL got the initial operational clearance from the Air Force in February 2020 and from the Army in February 2021. The Army, however, wanted some more improvements in the rudder margin, which plays a major role in controlling the yawing motion of a helicopter. After incorporating the changes, HAL completed the test flights. Pilots and engineers from the Army and the Air Force tested the helicopters at the base camp in Leh and at the Amar helipad, which, at 19,000ft, is among the highest helipads in the world. After the successful conclusion of the tests, HAL is adding features such as emergency float system and automatic flight control system.

“Though the final order has not yet come in, we have been tasked to give the first helicopter in August. The Air Force and the Army have given us the letter of intent for 12 helicopters (limited series production). Once that is over, the actual order will come in for the remaining helicopters. We are going ahead and investing our own funds to build these helicopters,” said Chatterjee.

Aviation experts are hopeful that the LUH would revolutionise India’s defence capabilities. “Indian forces need a chopper that can operate at 20,000ft. Such high altitudes pose challenges like the prevalent air density that thins out, allowing only a few rotorcraft in the world to operate,” said Linganna. “The ‘two-segmented blade’ adopted for the first time on the LUH rotor system offers a compact folded dimension. It can fold the blades within seven minutes and can also be used in aircraft carriers. It could be a game changer.”

The three-ton LUH can operate at 20,000ft above sea level

Up to 6 passengers can be accommodated

The LUH’s top speed is 240kmph

First LUH will be delivered in August to mark the 75th Independence Day
Click to expand...