HariPrasad-1 said:
Actually, Production of HTSE is a great achievement. We shall no more be rely on Russia or France or any other European nation for engine. Now we can manufacture medium class Choppers on our own. We can now make its electronics, We have HELINA and Dhruvastra ready, We have indigenous rockets and lots of electronics. Of course , the gun is imported but that will do as it is not that much important component. We can indigenize it in coming days. Next should be HTFE 25 and its upgraded version HTFE 35 with afterburner to power Jaguar on Mission mode. That will allow us to use Jaguar for atleast one more decade. Kaveri 110 with dry thrust in excess of 64 or possibly 72 kn in line with EJ 200 should come next. If that comes, Our MWF and AMCA will get a big boost. Capabilities of MWF will go up by a big margin. MWF is a great plane with 58 Kn Dry and 98 kn Afterburner. Imagine how will it perform with 64 or 72 KN dry and 110 kn afterburner. All this is possible if That project is managed well particularly. Either do JV or go in for R & D in big way. Baba Kalyani had said that India can get Kaveri in next 7 years if R & D is done proper manner. Many new technologies are developed including new single crystal blade, Thermal coating, Titanium Disk. 200 Such disks are already delivered to HAL for Jaguar engines. We should achieve this engine on mission mode.
Click to expand...

l like your comment, but you missed t/w ratio of kaveri engine. kaveri not only failed to produce enough power, but also overweight by 200kg plus. 20% reduced power is not a issue. I think, drdo comes with new engine 100kn, and need jv for 5th gen 120kn. [like qrsam] also ej more advanced than ge404 and lighter than ge414, means ej 1gen ahead of kaveri base.
P

Trololo said:
Will LCH come with DIRCM? And how old is the LCH's self protection suite and EO pod? Is it time for an upgrade yet?
Click to expand...

I was just wondering the same about DIRCM, and found your post. MWS and DIRCM are the only two things(flares also) that stand between a low flying heli and a MANPADS IMHO. I am also curious about DIRCM proliferation in our russian tranport fleet. Also is there any further movement on BEL DIRCM(not sure weather its a Israeli origin system) which was offered for mil mi-17 upgrade. Hope it doesn't need another kargil to remind our armed forces importance of these systems. It took 27th feb for our air force to order sdr.

pipebomb said:
I was just wondering the same about DIRCM, and found your post. MWS and DIRCM are the only two things(flares also) that stand between a low flying heli and a MANPADS IMHO. I am also curious about DIRCM proliferation in our russian tranport fleet. Also is there any further movement on BEL DIRCM(not sure weather its a Israeli origin system) which was offered for mil mi-17 upgrade. Hope it doesn't need another kargil to remind our armed forces importance of these systems. It took 27th feb for our air force to order sdr.
Click to expand...

LCH is designed for DIRCM

whether it comes is another question. Strange HAL hasn’t put any self protection suite on the LCH as of now- not even on the LSP airframes 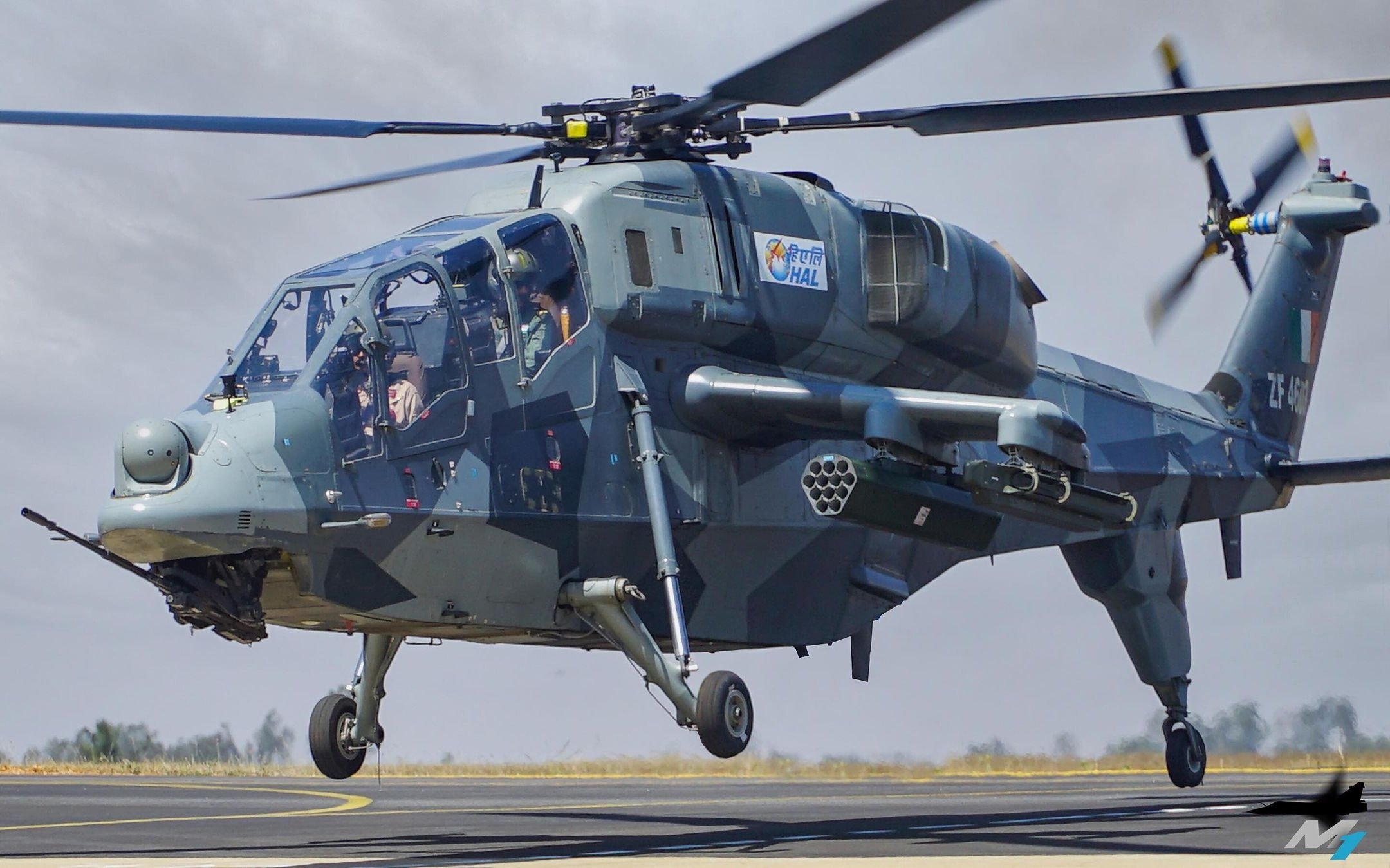 LIGHT COMBAT HELICOPTER
Hindustan Aeronautics Limited (HAL) is confident that it will receive the first contract for the indigenous Light Combat Helicopter (LCH) by the end of the year. The price negotiations for the LCH having been completed, HAL has increased production of the LCH. In February 2020, HAL had inaugurated the LCH final assembly hangar. Manufacturing and fabrication work has ramped up at HAL’s facility in Bengaluru. HAL chairman R. Madhavan recently stated, “That (the order) will come very soon. We have concluded price negotiations. We are now awaiting financial sanction. By the end of this year, we should see the initial order for 15 aircraft. After that we expect orders for more than 150. In fact, assuming we’re receiving the order, we’ve already begun production of five new aircraft immediately. This will allow us to deliver the aircraft earlier than planned, once the order is confirmed.”

Unlike virtually every other attack helicopter in the market, the LCH’s biggest designed-in capability is high altitude performance, a key requirement from the aircraft users. Prototypes of the helicopter have been successfully tested over the last decade in the super-high altitude areas of Ladakh and the Siachen Glacier. According to HAL’s chief helicopter test pilot Wing Commander Unni Pillai, “We are awaiting contract signature. The delivery of the first 15 can happen almost immediately. We’ve already made structures for nine helicopters in-house using HAL money. They only need to be equipped. Will take six months to deliver and we can do it before the stipulated time in contract. Will be the first time a delivery is happening well in advance to the users. We expect a total order for 165 airframes. Looking at foreign market very closely too. Very few countries make a cost-effective attack helicopter — few countries can afford the capability. We will compete with China too.” At the testing level, weapons trials have been successful, though bureaucratic hurdles have left the LCH not fully armed yet, - LCH has the launchers but without weapons at present. Armed with a chin-mounted 20mm Nexter M621 cannon and 70mm rocket pods, the LCH has ATAM (air to air Mistral) launchers, and will deploy the Dhruvastra twin launcher for the indigenous HELINA anti-tank guided missile (ATGM). There are also some efforts being made to arm the LCH with a foreign-made anti-tank missile, either the Rafael Spike ER or MBDA PARS L3, though no final decision has been taken on the issue.

The impetus for the development of the LCH came in wake of the Kargil Conflict that revealed lack of suitably armed helicopters capable of operating unrestricted in high-altitude area (HAA). Hence both HAL and the Indian military began efforts to define a conceptual combat helicopter for this role. During 2006, HAL announced launching a development program to produce the LCH. Originally, the LCH was anticipated to attain initial operating capability (IOC) by December 2010, however, on March 29, 2010, the first LCH prototype performed its maiden flight. An extensive test program, involving a total of four prototypes, was launched. During these tests, the LCH gained the distinction of being the first attack helicopter to land in Siachen, having repeatedly landed at several HAA helipads, some high as 13,600 to 15,800 feet. On August 26, 2017, limited series production of the LCH was formally inaugurated.

The LCH is a derivative of the HAL Dhruv, which was inducted into Indian Military during the 2000s. By 2010, the IAF was reportedly set to acquire 65 LCHs while the Indian Army 114. But the LCH programme was delayed and series trials could begin only on July 1, 2012 though HAL had expected LCH to receive Final Operational Clearance during 2011. During early 2015, a number of cold weather trials involving the third prototype (TD-3) were carried out at Air Force Station Leh. During these tests, engine start-up tests (performed using internal batteries after lengthy overnight exposure to the cold climate without special protective measures being applied) proved satisfactory at the temperatures as low as -18 °C at an altitude of 4.1 km. Several flights were also carried out to assess the rotorcraft's high altitude performance and low speed handling as mentioned above. Thereafter, hot weather flight trials were conducted at Jodhpur, during which the type was exposed to temperatures ranging from 39 to 42 °C. The flight testing reportedly covered 'temperature survey of engine bay and hydraulic system', 'assessment of performance', 'handling qualities and loads' at different 'all up weights', 'low speed handling' and 'height-velocity diagram establishment'. On December 1, 2015, LCH completed its first flight. By March 2016, the LCH had reportedly completed basic performance flight testing and outstation trials, including a number of live-fire tests involving firing 70 mm rockets in its weaponised configuration.

By mid-2016, certification firing trials had commenced, these included tests of the integration of its mission sensors, such as the electro-optical system, helmet pointing system, and of the various armaments – air-to-air missiles, turret gun and rockets – that the type can deploy. During mid-2016, the LCH was recognised as having completed its performance trials, paving way for the certification of its basic configuration on October 18, 2015. On August 26, 2017, the then Defence Minister formally inaugurated full-scale production of the LCH. On January 17, 2019, LCH completed weapons trials with successful firing of Mistral-2 air-to-air missile at a flying target. As of now, while the Indian Air Force (IAF) will be LCH’s launch customer, the Indian Army will receive most of the 165 planned airframes. The LCH will be a good boost for the combat capability of Indian Armed Forces.