During the test, the S200 booster was fired for 130 seconds and generated a peak thrust of about 500 tonnes. The performance of the booster was exactly as predicted. Nearly 600 health parameters were monitored during the test and the initial data indicates normal performance.

Is it necessary to open a new thread for each new event when we already have a sticky thread "ISRO news and views."

Bangalore: Indian Space Research Organisation has successfully tested the third biggest solid rocket motor in the world after the booster rocket of Nasa’s space shuttle and Arianespace’s Ariane-5 launch vehicle. The Isro rocket motor is 22 metres long and 3.2 metres in diameter.
The rocket was tested on ground on Sunday at Sriharikota, Isro’s biggest and most powerful rocket motor called S-200, powered by 200 tonnes of solid propellant. This is a vital step in the development of its Geosynchronous Satellite Launch Vehicle Mark-III (GSLV Mk-III), which will put a satellite weighing 4 tonnes in orbit.
N Narayana Moorthy, project director, GSLV Mk-III, described the test as a big success. The firing of the motor began at 8 am at the test bed at the Satish Dhawan Space Centre and lasted its full duration of 130 seconds. The performance was exactly as predicted with nearly 600 parameters being monitored. During the test, the motor produced a peak thrust of 500 tonnes. Isro scientists have said that the design, development and successful realisation of the motor was entirely an indigenous effort of the Vikram Sarabhai Space Centre, Thiruvananthapuram, and the SDSC, Sriharikota, in collaboration with public and private sector industries. The preparation and casting was done at the newly built Solid Propellant Plant at Sriharikota. V Srinivasan is the Project Director of the S-200 motor programme.
Two S-200 motors will hug the core liquid stage of the GSLV Mk-III rocket, which will also be propelled by a powerful cryogenic engine. The GSLV Mk-III which is at an advanced stage of development will weigh 630 tonnes and will be 43.5 metres tall.

Testing of S200 Engine ISRO' pride.Third largest in World after NASA and Arianespace

India successfully conducted static testing of its largest solid propellant booster, S200, which will form the strap-on stage for the GSLV-Mk III launch vehicle being developed for putting heavier satellites in space.

The GSLV Mk III will make India fully self reliant in launching heavier communication satellites of INSAT-4 class weighing 4500 to 5000 kg, besides enhancing capability to be a competitive player in the multi-million dollar commercial launch market.

The S200 solid booster, which will form the strap on stage for GSLV-Mk III, contains 200 tonnes of solid propellant in three segments.

During the test, the S200 booster was fired for 130 seconds and it generated a peak thrust of about 500 tonnes, the statement said adding, its performance was exactly as predicted.

Nearly 600 health parmeters were monitored during the test and the initial data indicated normal performance.

Today's successful test of S200 is a major milestone in the solid rocket motor programme of ISRO and a vital step in the development of GSLV -Mk III, the statement said.

I hope u all will love these pictures

Oops this document was posted much nicely earlier

AsianScientist (Sep. 14, 2011) – India's space program crossed an important milestone on September 4 this month, when the Indian Space Research Organization (ISRO) successfully carried out the second test of the strap-on S-200 solid rocket booster, stated to be the biggest in Asia and the third largest in the world after the ones flown on NASA's space shuttle and Arianespace's Ariane 5 rocket.
The primary function of the strap-ons is to provide an initial boost to the rocket.
The success of the test assumes significance because the S-200s will form the strap-on stage for a new rocket known as the Geosynchronous Satellite Launch Vehicle (GSLV) Mark 3 version which is now in an advanced stage of development. There will be two strap-ons in the rocket.
This vehicle, slated to make its maiden flight either towards the end of 2012 or early 2013, will fly communication satellites weighing four tons. In contrast, the present version of GSLV's can carry communication satellites weighing only up to two tons.
Once the GSLV Mark 3 becomes operational, ISRO's dependence on Arianespace – the European rocket organization – to carry its four-ton class of communication satellites will be drastically reduced.
In the recent test which was conducted at the Satish Dhawan Space Center, Sriharikota, the S-200 fired for 130 seconds without any problems. Containing 200 tons of solid propellants, the length of the stage is 21.9 meters and its diameter is 3.2 meters. The S-200 was first tested on January 24, 2010.
For its maiden flight, the rocket will lift off with the simultaneous ignition of both the stages which will burn for about 130 seconds and separate at 149.3 seconds into the flight.
In another development, ISRO chairman K. Radhakrishnan announced last Friday at a media briefing in Bangalore that provisionally, the launch of the Megha Tropiques satellite – an Indo-French venture – has been fixed for October 12, 2011.
With it three other nano satellites will also be placed in orbit: IIT Kanpur's Jugnu, SRM University's SRMSAT, and another one from Luxembourg.

Thank you so very much PlugWater.

The above video shows that there is thrust vectoring in these boosters as well. Wow!

Excellent work plugee, you should have taken up rocket science instead of engg!

I heard the Space-X Falcon series managed to reduce launch costs by sticking with one type of engine, they have multiple engines of the same type instead of having 2 different types of engines on booster phase, which is the liquid fueled rocket motor and the two massive solid boosters. Has ISRO thought about that procedure?
Last edited: Sep 14, 2011

GK, IMHO now is not the time to measure our rocket's efficiency with other rockets.

We have to develop our MK3 as soon as possible and stop being dependent on Ariane.

Later we can reduce the weight of rocket, increase the payload etc.

If we succeed in launching GSLV-III then it will be concerned as the most technological advance made by INDIA.

The first Nose Cone Adaptor (NCA) Assembly-V2 version of GSLV MK-III was handed over to Vikram Sarabhai Space Centre
(VSSC) of ISRO in Bangalore on November 10,2012.


The Nose Cone Adaptor (NCA) is an intricate riveted structural assembly of S200 stage (solid booster stage) of Geo-stationary
Satellite Launch Vehicle MK-III. The S200 solid booster stage is attached to the main core vehicle
through NCA assembly. The assembly is cylindrical in shape, 3200 mm in diameter and 1600 mm in height . The assembly is delivered to ISRO in a record time of six months from the receipt of drawings.

India's heaviest rocket ever is expected to take to the sky next January, later versions could be used to send humans on space missions.

The mainstay of the Geosynchronous Satellite Launch Vehicle —Mark III (GSLV-Mk III) would be to put in orbit communication satellites weighing between four and five tonnes, thus packing more transponders per launch.

This will also be a first time that ISRO scientists would undertake an experimental flight of a launch vehicle which would fall into the sea after reaching a height of 120 km. "We have been simulating the flight using computers. But there are certain tests that cannot be carried out on the ground. We will test the rocket in a cost effective manner," GSLV-Mk III's project director S. Somnath said.

He said ISRO engineers have planned to take some 2,000 measurements during the experimental flight of the GSLV-Mk III, which would weigh 640 tonnes at lift-off, making it the heaviest rocket built in the country.

"All the 2000 measurements during the flight would be telemetred down to the ground station. We will analyse them.

This will enable us to have full knowledge of the flight," Somnath said.

The new rocket, which can put a four tonne satellite in orbit, will help Antrix Corporation, ISRO's commercial arm, to offer cheapest space launches in the niche market. 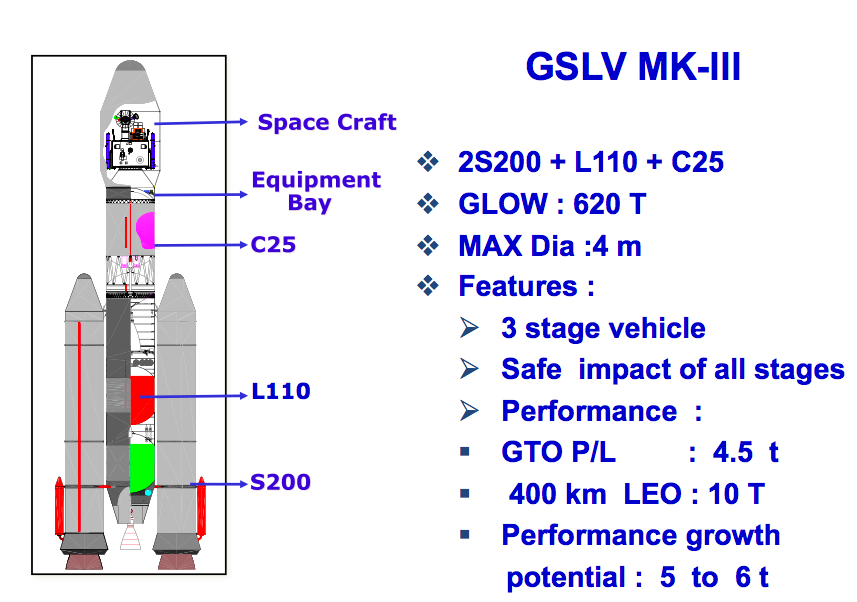 rahul - isnt one of the gslv's supposed to liftoff sometime this month ? - is this a delay or a different MK ?
You must log in or register to reply here.
Similar threads
GSLV Mark I
GSLV Mark II
Launch: GSLV Mk III M2 with 36 OneWeb (British) Satellites - October 2022
A Brief History of Indian Orbital Rockets
Share:
Facebook Twitter Reddit WhatsApp Link