Mao Xinyu, member of the 11th National Committee of the Chinese People's Political Consultative Conference (CPPCC), and grandson of Mao Zedong, is surrounded by reporters as he walks to the Great Hall of the People in Beijing, capital of China, March 3, 2011.

Askar Melayu at 2012-03-07203.82.82.*
Did he attend basic military training in the first place. Did he go through the normal military mill such as command staff college to be promoted to Major General? Or is it promotion in the PLA is based on nepotism or connection.

He looks okay but too heavy weight. He should on Diet and loose weight. As a soldier should look firmand smart.

He doesn"t look healthy to me. He is far too over weight as a military person.

There seems to be something in common with the grandsons of Mao Zeong and Kim Il Sung. Obesity.Is that because of affluent food of full nourishment and lack of exercise?

He looks some what fatty,i know it"s genetical thing.But he needs to improve his body which gives good look and respect.
Click to expand...

He looks like a mentally challenged obese 14 year old.

One can't tell the intelligence of another by appearance.

The only thing we can tell by his appearance is that Mr Mao has been feed very well, unlike the man in your avatar who must be suffering severe malnutrition.
K

Did he get that uniform for his service to the nation or because of his grandfather?????????

Some times apple falling far from the tree.

Mao was probably more fit at his 70s than this kid in his 20s.
M

Mao was probably more fit at his 70s than this kid in his 20s.
Click to expand...

Mao was fat, what are you talking about? Sure, he was not as fat as his grandson is, but he was fat.
T

Well fed boy, but its not difficult to lose those pounds and it may even gain him some respect if he does.

nimo_cn said:
One can't tell the intelligence of another by appearance.

The only thing we can tell by his appearance is that Mr Mao has been feed very well, unlike the man in your avatar who must be suffering severe malnutrition.
Click to expand...

One can tell the intelligence and capability if one keeps abreast with the news and reviews.

The recent promotion of Mao Xinyu, the only grandson of Mao Zedong, was, according to experts, an attempt by the Hu Jintao regime to balance political sensitivities at the highest levels of the Chinese Communist Party (CCP).

Mao, who holds a string of official titles in the Party apparatus, including deputy director of the Strategic Studies Department of the Academy of Military Sciences of the People's Liberation Army, member of the Standing Committee of the All-China Youth Federation, and committee member of the National Committee of the Political Consultative Conference, was officially promoted to major general of the People's Liberation Army on July 20, thus becoming China's youngest major general.

The promotion has been regarded as a compromise among factions, whereby Mao is used as a sort of decoration to placate traditional communist political forces. "I sense that Hu Jintao's regime is assigning the young Mao the role of a crown prince; also, promoting him to this role will demonstrate Hu's loyalty to Mao Zedong's relatives and his loyalty to Mao Zedong's political thought," said Yang Meizhong, a China expert at the Japan-based Mitsubishi Research Institute.

Hu Jintao is attempting to "unite and ensure his own position within different factions of the CCP," according to Mr. Yang.

The first indications of Mao's promotion came on July 29, when he took his wife and son to visit the ancient city of Zhaohua in China's southwest Sichuan Province. The official photos show Mao wearing a major general uniform, the shoulder straps revealing for the first time the promotion to major general.

Official confirmation came five days later. On August 2, 2010, a spokesman at the Academy of Military Sciences confirmed the promotion to the Global Times, the Communist Party's mouthpiece for external propaganda. The spokesman did not reveal when Mao was promoted, but commented that the rise in rank was "natural," as the 40-year-old's "many achievements earned him the right to be promoted."

Whether Mao Xinyu's promotion was related to the still privileged status of revolutionary leader Mao Zedong—whose policies lead to the deaths and persecution of tens of millions—was a question of contention to some as it smacked of state-sponsored nepotism.

One citizen still under the spell of antiquated Mao Zedong political theories commented, "To have him promoted is not only necessary, but a must, because he might lead the people on the great path to socialism. He has come up through the ranks and deserves this promotion."

Mao himself, however, was more open. In an interview with China's popular website Net Ease, he admitted that his family background was "definitely a factor. This is an objective fact you can't avoid."

The news that Mao had been promoted was reported in September, 2009 by the Standard in Hong Kong. That report, however, appears to have been premature, as Mao's promotion was officially announced in China's state-run media as having taken place July 20, 2010.

Eating too much of: 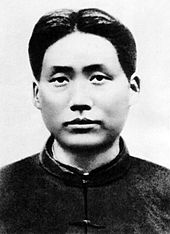 How can one say Chairman Mao is fat?

Compared to Chairman Mao, his grandson looks like a well fed Yorkshire pig!

Look at the grandson's double chin!

And the way he is walking - as if struggling to move forward because of his weight!

It also shows that Senior Communist party leaders and their families are privileged people and all that about equality of the proletariat is bogus.
Last edited: Mar 19, 2012
S

i wonder do they have to made special order of uniform for him. i doubt PLA have XXXXXXXXL uniform

I used to dislike young Mao either, as his PLA job seemed but a give-away just to avoid "losing face" that Mao's family was not taken care of etc..

But later I feel young Mao deserves some respect when I noted that he was reading papers attentively while some other CPPCC/CNG rep. were taken snapshots of napping in meetings. And he's quite self conscious of being Mao's grandson. So he always handles journalist questions cautiously and sensatively restricting to his own field to avoid becoming headlines of tabloids, which are sometimes quite sensational
Last edited: Mar 20, 2012

this guy is obviously useless....why got promoted???
S

I am surprised how come he's not ruling China right now.

By Jenny Yang
You must log in or register to reply here.
Similar threads
Indian visiting grandson in Alabama, attacked by police, paralyzed
PM Nawaz Sharif niece gets married to Indian General's grandson
Mandela's grandson evicts wife after discovering that baby son is his brother's
I'm in love with my grandson - and we're having a baby!
Share:
Facebook Twitter Reddit WhatsApp Link