India should encourage the below model, where the foreign companies are encouraged to source products locally and encouraged to setup their R&D centers in India, this will lead to a revolution in manufacturing industry and in future we can expect India becoming a super power in Manufacturing sector same like our Service sector...Aslo when we have a strong manufacturing sector that will automatically lead to a strong base for our defense industry and will lead to self reliance and tremendous scope for job opportunities...

Below are some of the pictures of Daimler Chennai Plant:-

At the opening ceremony for Daimler AG's $850 million India factory, Chairman Dieter Zetsche stepped down from the cab of a gleaming yellow 25-tonne truck with scaled-down horsepower, a stripped-back gearbox and no sign of the iconic Mercedes-Benz three-pointed star on its grille.
Daimler has been assembling high-end trucks in India for years, but its recently launched cut-price BharatBenz line has joined a trend by global heavy equipment manufacturers to compete in India's high-volume, high-growth - but cost-conscious - mass market.

But it's a market where being best isn't good enough. To target the low end of India's engineering markets, which accounts for over 70 percent of sales, manufacturers need to offer the best value, and to do that they need to go local.

"If customers can get gear manufactured by the global firms at lower or equal price points compared to the domestic manufacturers, then naturally there will be serious demand for international kit," says Bharti Momaya, chief manager at distributor firm, Ajisons, which sells locally-made switchgear in Mumbai.

Car makers have been localising their products for years, sourcing materials and making cheap, India-tailored vehicles. India-made cars from companies such as Ford or South Korea's Hyundai which poured billions of dollars into India in the 1990s now command 75 percent of the market.

By comparison, foreign truckmakers have less than 10 percent of India's domestic market, while overseas manufacturers of substations - a market targeted by local units of Germany's Siemens AG and Swedish-Swiss rival ABB Ltd - have just over 20 percent of the local market.

"In India there is definitely a need for international players to go beyond a premium strategy and to find local ways to develop a typically Indian product that really suits the market," says Nikolaus Lang, partner and managing director at the Boston Consulting Group (BCG) in Munich.

"In the truck industry in emerging markets, the next decade will be the decade of localisation ... that is the next challenge," he says.

It's a strategy that has worked well in Brazil, where foreign manufacturers dominate the truck market. And with restrictive foreign ownership rules in China and Russia, India is a key market for growth-hungry global manufacturers.

Global manufacturers producing in India can keep down costs by outsourcing some production to local vendors, by using local materials and labour, and by designing for local conditions, scaling back on size or added frills.

Daimler isn't alone. Engineering conglomerate Siemens is ramping up production of its low-cost SMART range in India. ABB, one of the world's biggest power and technology suppliers, has invested in local production plants and research and development centres.

They are taking on entrenched local manufacturers, such as Tata Motors and Ashok Leyland in trucks, and Larsen & Toubro and Crompton Greaves in power gear.

Siemens, which operates through its listed subsidiary Siemens Ltd, says products from its locally tailored SMART brand are up to 40 percent cheaper than in Europe.

It is selling power distribution gear which connects the grid to local circuitry that is "produced in Aurangabad on a low-cost base, for a country which needs low-cost solutions," says Armin Bruck, managing director of Siemens Ltd.

It estimates India's total market for its low-cost line of equipment is about 21 billion euros, and now sells 30 products for industrial clients, ranging from baggage conveyor systems for small airports to X-ray machines.

"Customers in India ... demand products that are low on maintenance, are robust enough to withstand the tough environmental conditions and operate efficiently," says Bruck.

Spanish wind turbine maker Gamesa expects to save about 18 percent on costs on its new G97 turbine, which will be 70 percent made in India by the end of the year and tailored to Indian conditions, says its country head, Ramesh Kymal.

The company is already applying lessons from its local research to its international operations, and is investing about 2 billion rupees in its third factory in the country.

Daimler, which employs 1,000 workers at its research operations in India, plans to source parts for its factories across the world from Indian suppliers.

"There are second order pay-offs for multinationals if they think about localising their business systems in India," says Rajat Dhawan, director at McKinsey India and leader of the consultancy's manufacturing practice in Asia. "They could leverage India as an export base," he says.

Siemens' India arm is its parent's first choice for low-cost part sourcing, Bruck says. Others are seeing the potential for local manufacturing operations.

ABB said in April it would spend 2.5 billion rupees to expand its manufacturing base by setting up a new factory.

Daimler's $850 million bet on India, the company's biggest greenfield investment outside of Europe, employs 1,400 people and is testimony to Zetsche's belief in localisation.

"It is the only Daimler plant in the world that houses products which combine Indian engineering with German and Japanese DNA under a single roof," he said at last month's plant inauguration, as hundreds of workers cheered.
Click to expand... 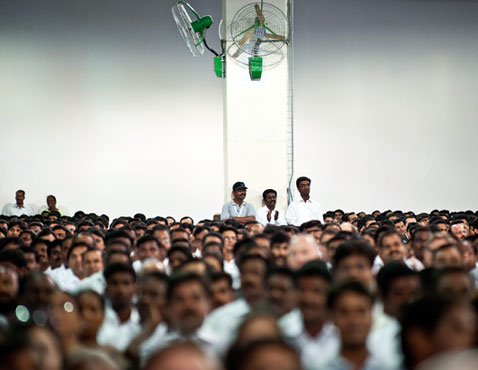 CHENNAI: Bharat Benz trucks are seen on the assembly line at the Daimler India Commercial Vehicles Plant at Oragadam in Chennai. The German automaker Daimler inaugurated its new factory, opening a new front against its Asian rivals, ever more threatening to world leadership.

The massive 400-acre manufacturing plant along with the integrated research and development centre and the state-of-the-art test track. The Chennai Plant is one of only three Daimler truck plants worldwide to combine truck assembly and components production at one location