A large consignment of weapons has reportedly been smuggled into India from Bangladesh after being shipped from Pakistan, backing the Home Ministry's apprehensions that sea routes could be used for arms trafficking ahead of the polls.

Indian intelligence agencies tracked a boat named Padma that was docked at Kutubdia port in Bangladesh about two weeks ago.

The vessel was used to transport the consignment of weapons, which was offloaded at the port before being smuggled into India through the porous border along Bangladesh's Jessore district, sources said. 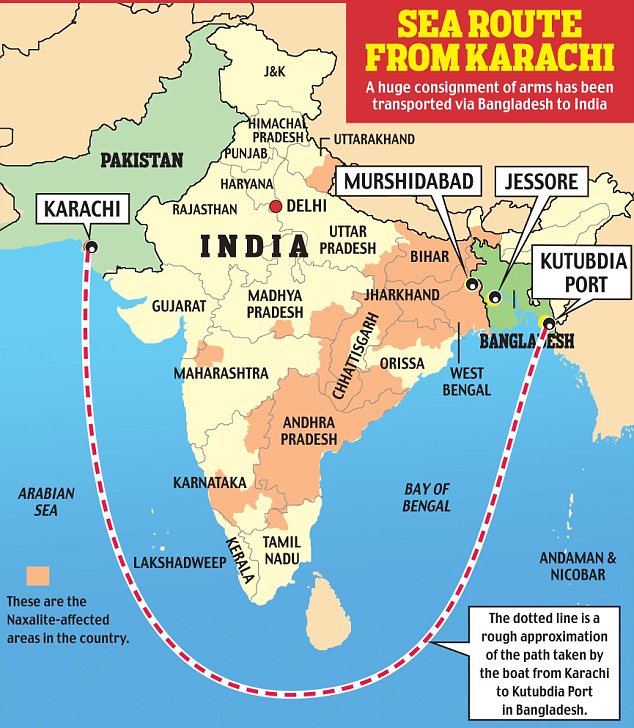 When guns fell from the sky

An Antonov An-26 aircraft dropped a large consignment of arms on Dec 17, 1995, in WB's Purulia district.

Key accused Niels Christian Nielson alias Kim Davy (in picture) and Peter Bleach, were said to have stayed in Varanasi before the incident.

A court in 1997 determining that the Ananda Marga group was the intended recipient of the consignment.
Click to expand...

Sources said intelligence agencies lost track of the consignment and did not know where it was sent to.

They suspect the weapons could be intended for insurgent groups, especially the Maoists, who look determined to disrupt the polls in the 'Red Zone'.

"We suspect the arms were transported to Murshidabad in West Bengal. The West Bengal police have been alerted," said an intelligence officer.

Maoist strongholds in states like Chhattisgarh, Jharkhand, Orissa and Bihar go to polls on April 10 and 17.

The sources said the boat began its voyage from the Pakistani port city of Karachi. While intelligence agencies were able to track the vessel's movement, they lost track of the arms consignment after it entered India, they said.

"As per our information, the weapons were loaded with some other cargo," an officer said.

The Home Ministry had issued an advisory in February that coastal states should stay alert to prevent the possible smuggling of weapons through sea.

The Centre alerted security forces about the increased threat of smuggling from neighbouring countries like Pakistan, Bangladesh, China and Nepal.

Sources said coastal routes are preferred to avoid detection. Sensing the increased risk of arms trafficking via sea, it was decided that the Coast Guard and the Navy too should be alerted.

Other than the trafficking of arms and ammunition, the Home Ministry had warned about the smuggling of narcotics and fake currency through areas bordering Pakistan, Bangladesh and Nepal.

A note prepared by the ministry on security along the international borders ahead of the polls stated that the Chief Election Commissioner had sought coordination between the home and defence ministries for guarding the coastline to prevent the movement of fake Indian currency, narcotics, drugs, criminals and arms and ammunition.

"To prevent illegal and criminal activities through coastal areas during the general elections, the defence ministry may be requested to sensitise the Coast Guard and Navy to increase the vigil in coastal areas," the note said.

Let NaMo come to power, then see what happens to these terror sponsoring countries......
You must log in or register to reply here.
Similar threads
China's Ghost Towns
Ghost Stories & other Paranormal Experiences
JNU to J&K: An attempt being made to bring the ghost of Afzal Guru back
Ludhiana to Cooch Behar: An Inside Look at India’s Ghost Airports
Share:
Facebook Twitter Reddit WhatsApp Link