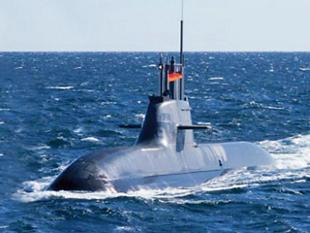 In a departure from its traditional approach to business in India, Germany is for the first time offering a military deal under the government-government umbrella for its new-generation conventional submarines that have exceptional underwater endurance.
While in the past the German government had kept away from contracts being bagged by its arms industries in India, the HDW 214 submarines are being offered as a special case for Indian Navy's requirement of six boats, which are to be made in India at an estimated cost of over Rs 60,000 crore.
Sources told ET that the formal proposal is being shared with the defence ministry in which the German government will give assurances on fair price, technology transfer and quality.
Russian and French submarines are, too, competing for the mega P 75I project, which is likely to see a private sector yard in India carry out a major chunk of the work. India will be mandating Air Independent Propulsion (AIP) - a technology that enables the submarine to remain underwater for several days at a stretch instead of coming up to surface frequently to replenish oxygen needed to burn the fuel — for the submarines.
"The offer has certain assurances that the product will meet Indian requirements," an official involved in the process told ET. Russia, which is developing its own AIP system, has already advised India to conclude the P 75I project under a government deal as it has too many complexities of technology transfer.
German company Thyssenkrupp Marine Systems that manufactures the submarine said it "is not in a position to comment on talks between the governments of the two nations", but said it was interested in offering its 214 class boats with "robust transfer of technology, training and meeting offset obligations". "We define this as a 'no-holds barred' transfer of technology in line with Modi government's 'Make in India' push," the company spokesperson said in response to a detailed questionnaire by ET.