What it is: The original CornerShot is a semi-automatic pistol with a hinge in the center that allows the barrel to swivel from left to right while the handle and trigger portion of the gun remain stationary, allowing the operative to shoot around corners in either direction. It can be seen fired by Angelina Jolie in the film Wanted.

What it does: In all custom variations, the weapon of choice is mounted on the front of the CornerShot and it bends horizontally in either direction at a 60-degree angle, or can be locked in a straight position. A flashlight and a digital camera are mounted on what is normally considered the bayonet position, and the operative uses a hinged screen on the left side of the trigger part of the gun to see what he’s shooting at while the barrel snakes around the corner.

Why war needs it: The CornerShot has the advantage in unpredictable terrorist or hostage situations. The operative is kept safely shielded by a wall, while the weapon is fired around the corner so the hostile enemy never knows what hit him.

Active duty: CornerShot has been used by SWAT Teams and Special Forces battalions in 15 countries, including Israel and the U.S. It was recently evaluated by Britain’s Ministry of Defense.
G

What it is: The genius of Metal Storm starts by combing the barrel with the magazine. There is no traditional firing mechanism, instead, when the trigger is pressed, electronic impulses are sent to the bullets igniting them all in rapid succession at a rate of 16,000 rounds a second from multiple barrels. Metal Storm can also be modified to launch grenades at a rate of a half-a-million rounds a minute. It is the fastest automatic weapon in the world.

What it does: In addition to its two modes and innovative ignition system, Metal Storm can be left completely unattended as a silent assassin. Its motion detecting sensors relay situational awareness stats on the battlefield to the commanding generals, so if an enemy intruder crosses paths with the Metal Storm, they'll most likely be full of holes. Metal Storm’s electrical ignition system allows it to more closely bond with computer targeting systems and it can be fired at lethal or non-lethal speeds.

Why war needs it: The ability to load different types of ammunition in the same weapon and to control the rate of speed that they’re fired gives the operative an infinite number of options in an infinite number of situations; from the tank-busting, armor-piercing rounds to a volley gun used in riot and crowd control situations.

Active duty: Metal Storm is still undergoing testing and has yet to be certified for deployment. Metal Storm is also partnering with iRobot (makers of the Roomba vacuum) to create a weaponized robot.
G

What it is: The Boeing YAL-1 Airborne Laser (ABL) is designed to intercept and shoot down Tactical Ballistic Missiles (TBM) with a Chemical Oxygen Iodine Laser (COIL) mounted on the nose and hood of a modified Boeing 747. The ABL heats the missile from the inside out until it explodes. The ABL is capable of shooting a missile at the speed of light from a range of hundreds of miles out.

What it does: Four sensors pick up on the heat signature and vapor trail of the missile initiating the destruction sequence. First, the laser on the hood fires, calculating the course and speed of the missile, then a series of three other lasers on the aircraft’s nose calculate the trajectory of the missile and the atmospheric turbulence it causes. All of this data is fed back to the ABL. Once changes are made, the COIL laser fires from the nose heating the missile and causing it to crack and explode. The whole process takes 8 to 12 seconds.

Why war needs it: Boeing’s YAL-1 Airborne Laser can shoot down missiles infinitely faster and more accurately than any other anti-ballistic weapon. Its classified range is somewhere outside hundreds of miles, so it can destroy missiles before they ever leave enemy territory, and can probably never be shot down.

Active duty: The ABL took its first test flight in 2002 and was scheduled to be ready for 2008, but it was delayed for further testing. It’s now $6.3 billion over budget with an uncertain future.
G

What it is: The traditional body armor of the U.S. armed forces consists of a ceramic plate that can take a few well-placed rifle shots, but the more hits it takes in the same place, the more it cracks. On today’s battlefields, soldiers don’t stand a chance. Enter Dragon Skin: the future of body armor that can protect a soldier lying down on a grenade without even busting a seam.

What it does: The secret behind Dragon Skin’s unparalleled strength and flexibility lies in its scales. They’re made from ceramic carbide discs that interlock and overlap like chain mail. It can not only take more damage, but it can also spread the brunt of the impact over a greater surface area.

Why war needs it: It is more effective than the Interceptor vests currently used in the U.S. and it offers greater range of motion for the soldier wearing it. In test after test, Dragon Skin has taken punishment from all sides and come out unscathed, while the competition cracked and left unquestionably fatal holes in its design.

Active duty: Dragon Skin has been purchased for use by many SWAT teams across the country, but will never see active duty on the battlefield until U.S. Forces reverse their controversial and disputed claims that Dragon Skin did not meet army testing requirements. The results of what the army says were failed tests have been released to the public, but Pinnacle Armor still maintains that the shots fired did not penetrate the actual ceramic disks.
G

What it is: Imagine a soldier that doesn’t eat, doesn’t sleep and as it lines you up for a kill, you can't even look into its eyes and plead for mercy. This is SWORDS: The world’s first weaponized robot and what Time magazine called, “One of the greatest inventions of the 21st century. ... It can be outfitted with everything from a machine gun to a rocket or grenade launcher, seriously violating Asimov’s three laws of robotics."

What it does: The three-foot 100-pound robot can climb stairs, go underwater at a depth of 100 feet and navigate through snow, sand and rock at the same pace as a running soldier. It can see in the dark, has infrared vision and its two zoom cameras are so detailed they can pick up the name on your nametag and see whether your weapon is cocked from 1,000 feet away. The SWORDS is operated from a computer remote control posted at a distance of 15 football fields.

Why war needs it: Even though it’s not smart enough to replace soldiers on the battlefield completely, since it is still operated by remote control, SWORDS can execute missions too dangerous for humans with its operator at a safe and undetectable distance from the action.

What it is: It may not look like much now, but it is actually the first working step in the U.S. Navy’s quest to develop a weapon that can expel a projectile at nearly Mach 8 -- eight times the speed of sound. It doesn't use explosive energy, instead it creates an electromagnetic field that currently creates an eight-megajoule force, and by 2017 the operational power will be an awe-inspiring 5,000 mph. You could cover the range of an entire battlefield with one offshore weapon. These weapons don’t even need warheads in some cases.

What it does: Electrical magnetic energy is generated by the high voltage in a giant bank of flux capacitors that send electrical energy across upper and lower rails of pre-stressed steel bolts, creating a charge that has enough kinetic energy power to reach unbelievable speeds.

Why war needs it: The Navy’s new Electromagnetic rail gun could potentially end wars faster without delivering as lethal a payload as a nuclear bomb. It could also protect more soldiers on the ground without spreading resources too thin, since it can cover such a wide area of land.

Active duty: The Navy will begin testing a working prototype that is four times faster than the current eight-megajoule model. The navy plans to equip their next generation of electrically powered ships with these rail guns by 2020.
G 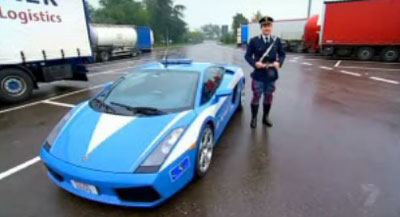 Some European highways are designed for speed and there is no speed limits in certain areas. This Lambordhini Police Car is probably the best way to discourage anyone from a police chase. I just wish the cops around the world will one day have the same type of tools. It just looks too good. 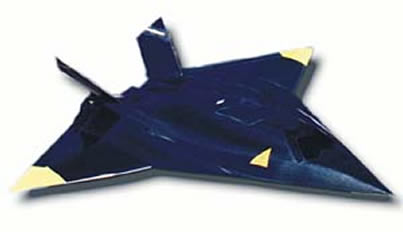 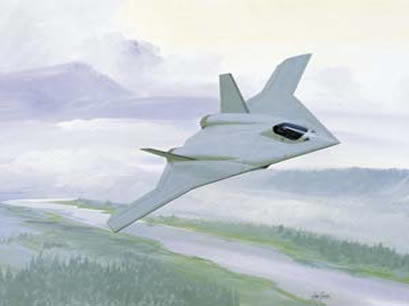 The Future Offensive Aircraft (FOA), a project founded on the assumpion that the UK
would need to replace its fleet of Tornado GR.4 interdictor strike aircraft early in the 21st century. 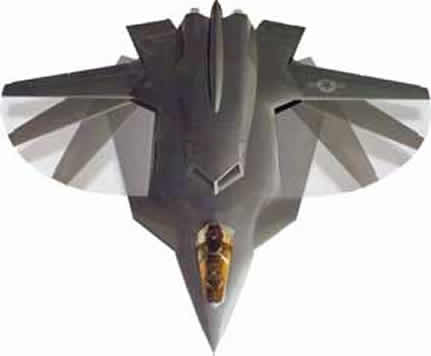 The US Air Force has been testing the X-29 for two decades now, this very unusual looking aircraft has a pair of forward sweapt wings (FSW). The Switchblade design seems to be based on the X-29, with the added capability to change the position of the wing.
These wings gave the aircraft amazing maneuverability, no other aircraft can make tighter turns than the X-29. The X-29 was tested from 1984 to 1992 in a joint NASA, DARPA (Defense Advanced Research Projects Agency) and U.S. Air Force Program, and made a total of 374 combined flights.
Reverse airflow-forward-swept wing vs aft swept wing. On the forward-swept wing, ailerons remained unstalled at high angles of attack because the air over the forward swept wing tended to flow inward toward the root of the wing rather than outward toward the wing tip as on an aft-swept wing. This provided better airflow over the ailerons and prevented stalling (loss of lift) at high angles of attack.
DARPA and NASA have invested millions of dollars on the program, yet not a single official US fighter aircraft uses the FSW design...but in the black world there is one: The Switchblade! 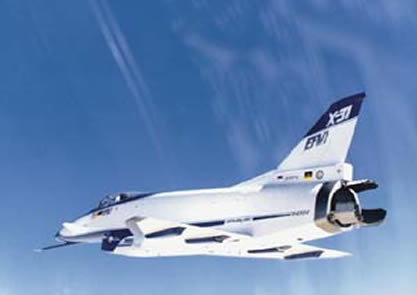 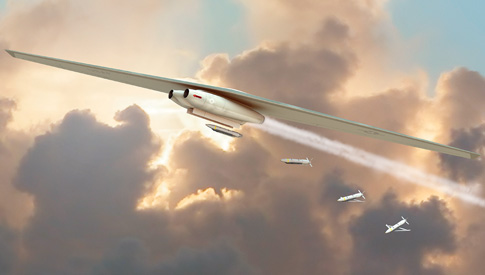 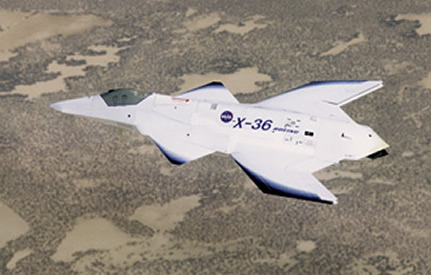 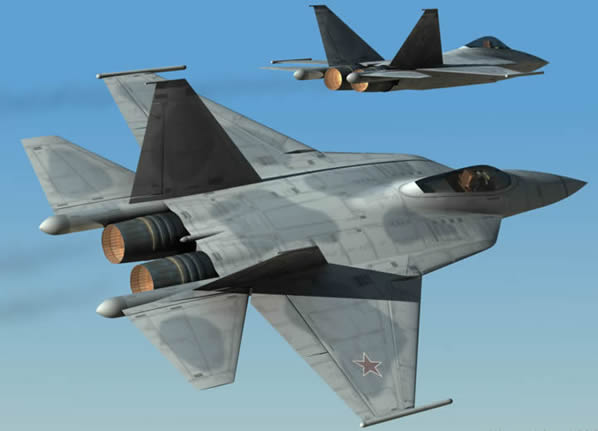 The PAK FA (or PAK-FA) is a Russian fifth-generation fighter jet which is being developed by a consortia of companies, including Mikoyan, Yakovlev and spearheaded by Sukhoi. It stands for Future Air Complex for Tactical Air Forces. It is intended to replace the MiG-29 and Su-27 in the Russian Air Force. It is scheduled to have its first flight in 2007, and enter service with the Russian Air Force sometime between 2012 and 2015 and might also be exported to other countries.
The PAK-FA will incorporate technology from the Su-47 and the MiG 1.44.
Although there is no reliable information about the PAK-FA's specifications yet, it is known from interviews with people in the Russian Air Force that it will be stealthy, have the ability to supercruise, be outfitted with the next generation of air-to-air, air-to-surface, and air-to-ship missiles, and incorporate an AESA radar. It will be powered by the AL-41F engine or an advanced derivative of it. Reports indicate that it will be slightly larger than the MiG-29 but not as large as the Su-27.
There is no certainty for now what United States aircraft will be the competitor for the PAK-FA. While some believe it will be the F-35, the information so far seems to indicate it will be the F-22. Without further official information, it is not viable to reach a final conclusion in this matter.
You must log in or register to reply here.
Similar threads
Unmanned weapons future of warfare DRDO CHEIF
Could Pakistan Use Nuclear Weapons in a Future Conflict with Afghanistan?
MBDA rolls out vision of future infantry weapons
Future Weapons thread
Share:
Facebook Twitter Reddit WhatsApp Link