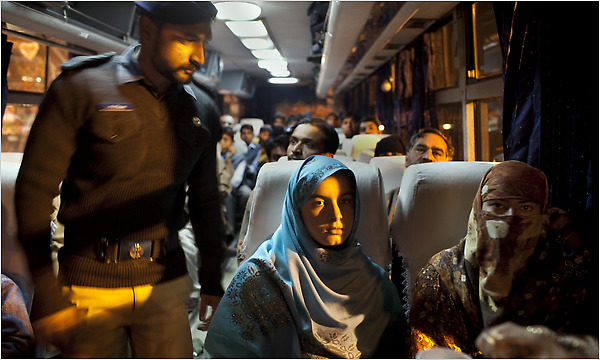 Tyler Hicks/The New York Times
A police officer checked a bus in Lahore, Pakistan’s second-largest city and one where deadly militant attacks have increased in the past few years. Under the influence of Al Qaeda, militants’ energies have been turned inward, against Pakistan’s own government and people.

By SABRINA TAVERNISE and WAQAR GILLANI


LAHORE, Pakistan — Umar Kundi was his parents’ pride, an ambitious young man from a small town who made it to medical school in the big city. It seemed like a story of working-class success, living proof in this unequal society that a telephone operator’s son could become a doctor. 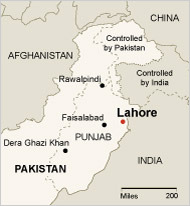 
But things went wrong along the way. On campus Mr. Kundi fell in with a hard-line Islamic group. His degree did not get him a job, and he drifted in the urban crush of young people looking for work. His early radicalization helped channel his ambitions in a grander, more sinister way.


Instead of healing the sick, Mr. Kundi went on to become one of Pakistan’s most accomplished militants. Working under a handler from Al Qaeda, he was part of a network that carried out some of the boldest attacks against the Pakistani state and its people last year, the police here say. Months of hunting him ended on Feb. 19, when he was killed in a shootout with the police at the age of 29.


Mr. Kundi and members of his circle — educated strivers who come from the lower middle class — are part of a new generation that has made militant networks in Pakistan more sophisticated and deadly. Al Qaeda has harnessed their aimless ambition and anger at Pakistan’s alliance with the United States, their generation’s most electrifying enemy.


“These are guys who use Google Maps to plan their attacks,” said a senior Punjab Province police official. “Their training is better than our national police academy.”
Like Mr. Kundi, many came of age in the 1990s, when jihad was state policy — aimed at challenging Indian control in Kashmir — and jihadi groups recruited openly in universities. Under the influence of Al Qaeda, their energies have been redirected and turned inward, against Pakistan’s own government and people.
That shift has fractured long-established militant networks, which were once supported by the state, producing a patchwork of new associations that are fluid and defy easy categorization.


“The situation now is quite confusing,” said Tariq Parvez, director of the National Counterterrorism Authority in Islamabad, Pakistan’s capital. “We can no longer talk in terms of organizations. Now it’s a question of like-minded militants.”
The result has been deadly. In 2009, militant attacks killed 3,021 Pakistanis, three times as many as in 2006.


The issue is urgent. Pakistan is in the midst of a youth bulge, with more than a million people a year pouring into the job market, and the economy — at its current rate — is not growing fast enough to absorb them. Only a tiny fraction choose militancy, but acute joblessness exacerbates the risk.


Mr. Kundi’s journey and the ways he veered off course parallel Pakistan’s own recent history. Born to Pashtun parents, he grew up in a small town in southwestern Punjab, where camels lumber in slow clumps, and sand stings the eyes. His father’s monthly income of $255 put them at the lower edge of Pakistan’s middle class. But life still took patience. Meat was a luxury. His father could afford to visit him in medical school only once.


He brought that past — part shyness, part shame — with him to college in Faisalabad, the third-biggest city in Pakistan. The city was an explosion of things modern. Traffic jams. Fancy restaurants. Uncovered women. For young people from small towns, unfamiliar with city life, the atmosphere can arouse a rigid defensiveness, said Mughees-uddin Sheikh, a dean at the University of the Punjab in Lahore, Pakistan’s second-largest city.


“The student is tempted, but he doesn’t understand it because he wasn’t educated,” said Mr. Sheikh. “He’s been deprived of things like this.”


To ease the adjustment, young people join student groups, which, like powerful inner-city gangs, help them navigate life — how to use a bank, which mosque to pray in — but also offer protection.

When Mr. Kundi arrived at Punjab Medical College in the late 1990s, he chose a group with an Islamic focus, according to a classmate and friend, Muhammad, who asked that his last name not be used because he feared association with a militant. It was a typical choice for students from devout families, who want their sons to stay out of trouble in the city.

A good read. It describes the changing nature of militancy in Pakistan.

The new militancy is much diffused in nature and many times consists of individual terrorists collaborating with each other rather than working with organizations.
V

Their strikes were skillful. In last year’s attack against the Sri Lankan cricket team, led by another educated young man from a working-class family, a 29-year-old nursing assistant, Aqeel Ahmed, only three top people out of about 14 attackers knew the nature of the target, according to a police official who investigated the attack. The rest believed that the bus they were ambushing held an American delegation.
Click to expand...

Many Pakistanis continue to fervently believe that India was behind the attacks on the Sri Lankan cricket team. Of course it was never anything more than conspiracy theories.

Here we have an independent journalistic investigaton confirming it was homegrown terror.
V

“He’s that boy who is not in a rigorous system of rule setting,” Brigadier Rana said in an interview in Rawalpindi. “He becomes someone who drifts, who spends afternoons hitting stray dogs, and no one notices.”

His parents, at their wits’ end, take him to a mullah, hoping to instill discipline, the theory goes. The two develop a close relationship, sometimes even sexual, giving the boy the attention he has long craved. The mullah then introduces him to others, men who make him feel important, as if he is part of something bigger than himself.

Of the 24 militants in the study, about a third attended college, though not all graduated.

But socio-economic theories explain only so much. For Mr. Kundi, an emotional young man with thwarted ambitions, militancy had a psychological pull. Mr. Parvez of the National Counterterrorism Authority said militants he had interviewed called jihad an addiction, a habit that made them feel powerful in a world that ignored them.

“Out there I’m a useless guy, unemployed and cursed by my family,” one militant said. “Here I’m a commander. My words have weight.”
Click to expand...

Interesting read. Quite a changing trend, there. Individual collaboration gives them the advantage of ambiguity.
V

sohamsri said:
Interesting read. Quite a changing trend, there. Individual collaboration gives them the advantage of ambiguity.
Click to expand...

Yes but it also makes them difficult to control.

These independent militants are easily turned on Pakistan itself as they can be made to believe that GOP is aiding the infidel USA.
You must log in or register to reply here.
Similar threads
Frustrated Strivers in Pakistan Turn to Jihad
Pak frustrated after failing to get OIC's support on Kashmir, says would move without Saudis
China Frustrated After Dalai Lama Meeting Indian President
Frustration
Share:
Facebook Twitter Reddit WhatsApp Link