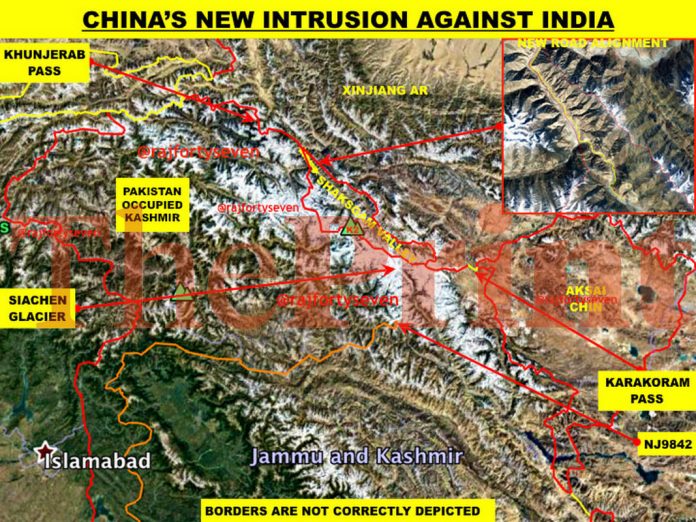 New Delhi: In new construction activity that is expected to be seen by India as a fresh provocation, China has begun building a road and military posts in the strategic Shaksgam Valley, located north of the Siachen Glacier in Pakistan-occupied Kashmir, satellite images accessed by ThePrint show.

The opening of a possible new front by Beijing in the western Himalayas follows confrontations between Indian and Chinese troops further east on the disputed border in Doklam and Tuting over the last six months. 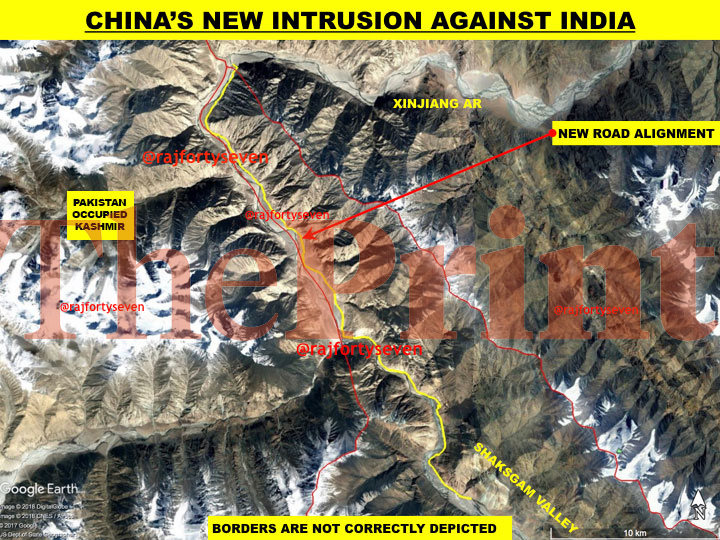 These new posts and the new 36-km road in Shaksgam Valley open up an additional avenue of approach for Chinese troops along the Line of Actual Control.

Shaksgam Valley is part of PoK and borders China’s Xinjiang Province, as well as the Siachen Glacier. It was ceded by Pakistan to China in 1963, when they signed a boundary settlement agreement. However, India does not recognise this and considers the valley to be a part of the state of Jammu and Kashmir.

Although this Shaksgam Valley project is not a direct military threat yet to Indian troops holding Siachen Glacier, the highest battlefield in the world, the construction there by the People’s Liberation Army (PLA) could be considered “provocative”, a former Indian Northern Army Commander said.

Google Earth satellite imagery of September and October 2017, and earlier, suggests that the road construction started in 2017. It probably started after the Doklam stand-off in the India-Bhutan-China tri-junction area that saw troops from both sides in a face-off that lasted more than two months starting in mid-June. 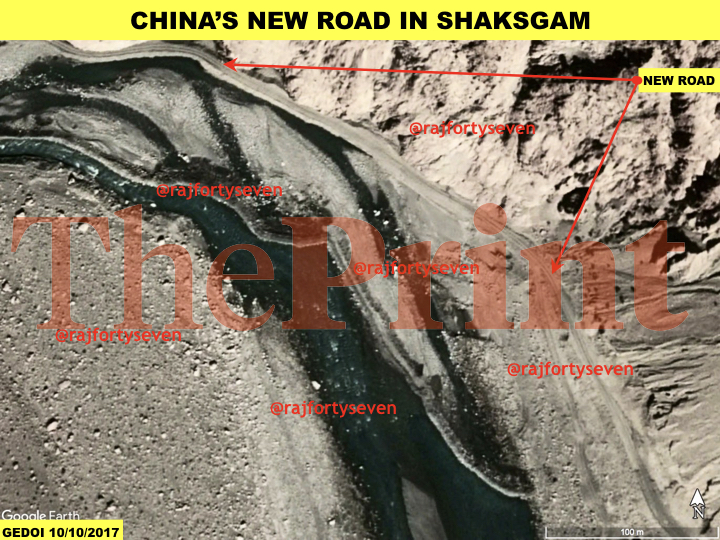 Chinese Border Defence Personnel—now part of the PLA—have also been observed patrolling the area along the newly constructed road that has come up in the last few months. At least two military posts are also visible now.

Older satellite imagery of 24 October, 2016 has no roads or posts in this entire area of Shaksgam Valley.

“Shaksgam Valley is disputed. Article 6 of the Pakistan-China agreement states that the boundary agreement would be renegotiated after the Kashmir dispute is settled,” he told ThePrint. “Therefore for China to increase its military presence in the area could be considered provocative.”

The Road & Bridges
The alignment of the new road is along the northern edge of the river. The road is being constructed with the compressed earth technique China uses in Xinjiang. Although the road is yet to be black-topped, it is expected to be completed before summer this year.

The new road needs several bridges to be built over rivulets in the area. Although no major bridge construction work is seen in the satellite images, this is also expected to start soon. 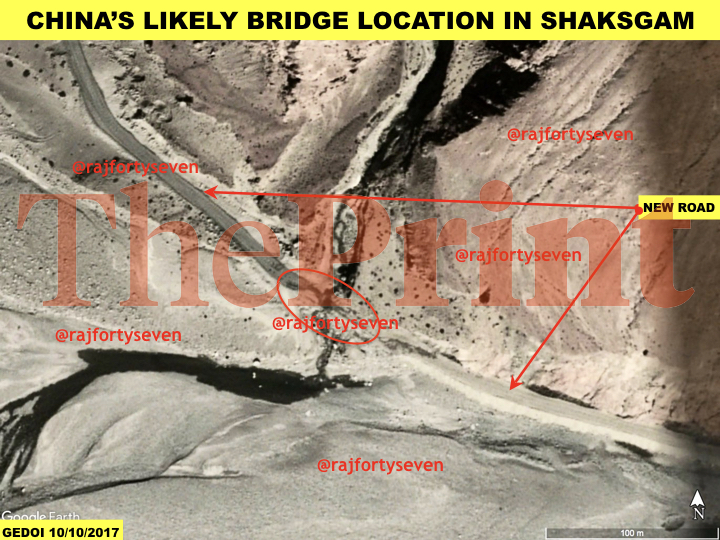 The Posts
Satellite images show that this new road is linked to two Chinese military posts outside Shaksgam Valley. One of the posts is thought to be the headquarters of the PLA unit operating in the area.

These two posts have a dugout fighting trench overlooking the river, and a training area behind.

There are also at least two military posts seen in Shaksgam Valley. One of them has double wire fencing as well as a double bund around it, with the wire fencing extending right up to the river. 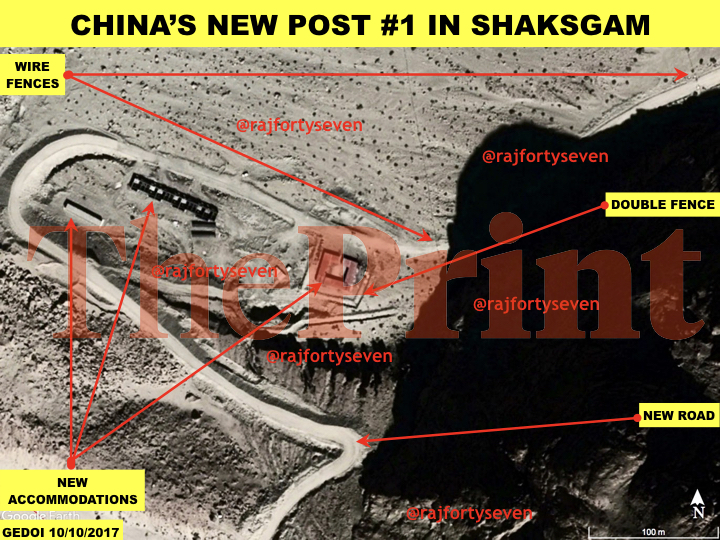 The first post is at the northern end of Shaksgam Valley and the second is 20 km to the south along the new road. 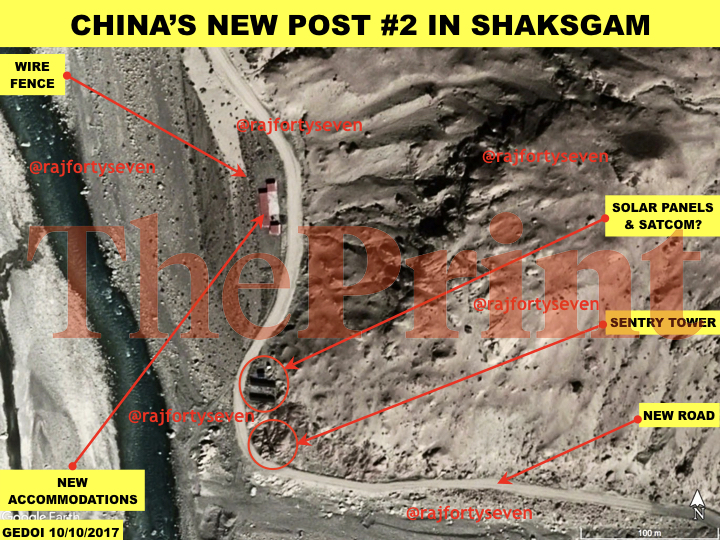 The base structure for a third post is apparently being prepared about 1.5 km southeast of the second post along the new road. A number of earth-moving and road construction equipment are observed very close to this third post. 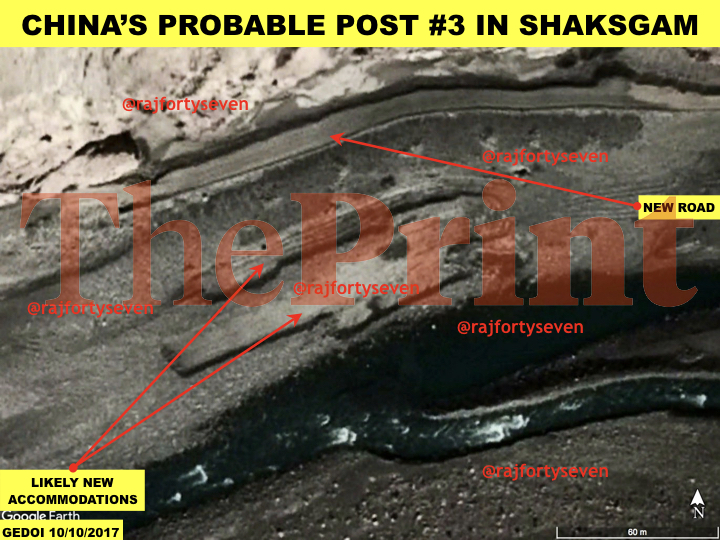