I knew the second I opened this thread it was going to be coming from a Russian source. France already has Tiger attack helicopters operating off BPC so no, it will not buy Ka-52.

Russian Mistral to be armed with Ka-52 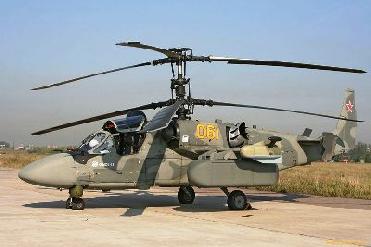 Following a decision to buy the vessel, Russia is currently negotiating the purchase of a Mistral-class amphibious assault ship worth 400-500 million Euros, with France.

Russia plans to build three more vessels of the same class in partnership with a French naval shipbuilder DCNS.

Asked about the best type of helicopters for the Minstral, Andrei Shibitov, chief of Russian helicopter holding said, the Ka-52 was the best helicopter for the aircraft carriers according to the French.

Two other types of helicopters were tested on the Mistral when the ship made a short port call in Russia in 2009, he said.

Ka-52 is a modification of the basic Ka-50 Hokum model. The development of the Ka-52 started in 1994 in Russia, but its serial production began only in 2008, the report said.

The helicopter is armed with 30-mm cannon, Vikhr (Whirlwind) laser guided missiles, rockets, including S-24s, as well as bombs and fitted with two radars - one for ground and one for aerial targets - including a Samshite nighttime-daytime thermal sighting system.

The 650-foot Mistral is capable of transporting and deploying 16 helicopters, up to 70 vehicles and 450 soldiers, although troop numbers can be doubled for short-term deployment.