Four Type 054A FFGs to Pakistan?

Rumors persist of a possible package of four Type 054A FFGs to Pakistan (here) in addition to the current four F22P "sword class" FFG deal. An injection of four Type 054A frigates with medium-range HQ-16 VLS SAMs would be a considerable upgrade for the Pakistan navy -- for the first time, it could provide an Area-Air-Defense umbrella for its task force. Other than the Type 053H3 "Jiangwei" class, the Type 054A frigate is the only Chinese frigate in mass production. It’s seaworthiness has been proven by deployments in the Gulf of Aden.

These rumors gain credibility this week since a senior Pakistani official told Janes Defense weekly that "Pakistan's navy was in informal negotiations with China for the purchase of another three to four frigates, that will be larger than the F22Ps." *

With courting from both China and US it is spring time for the Pakistan military.

Chinese Defense Minister Liang Guanglie made the remarks when meeting with Noman Bashir, visiting Pakistani chief of the naval staff.

China attached great importance to its traditional friendship with Pakistan, Liang said, adding that the two countries had conducted comprehensive and multi-level military exchanges and cooperation in various areas.

And pray where is the money going to come in from . Even if the Chinese give it away at throwaway prices, will a country surviving on handouts be able to pay even for this.

This time around the lending agencies are monitoring the flow of funds very closely.

The Type 054A (NATO codename: Jiangkai-II Class) is the new-generation multirole missile frigate developed from the Type 054 (Jiangkai Class), incorporated with improved weapon systems and sensors. The frigate is being built by the Shanghai-based Hudong-Zhonghua Shipyard and Guangzhou-based Huangpu Shipyard, both part of the China State Shipbuilding Corporation (CSSC).

So far a total of four hulls have been commissioned: Xuzhou (530), Zhoushan (529), Huangshan (570), and Chaohu (568). The first and third hull were built by the Huangpu Shipyard, and the second and fourth by the Hudong-zhonghua Shipyard. The fifth and sixth hulls were identified in the two shipyards in late 2008.

The Type 054A was designed primarily for air defence role, featuring a medium-range air defence missile system with a 32-cell vertical launch system (VLS) on the bow deck. The frigate is also capable of anti-surface strike with its YJ-83 anti-ship missiles.
Like the Type 054, the Type 054A incorporates a number of stealthy features in its hull design, including the sloped side to minimise radar cross section and the reduced profiles of external features. The helicopter deck at the stern has a single landing spot for a medium size helicopter, such as the Russian Kamov Ka-28 Helix, or the indigenous Harbin Z-9C. The deck is fitted with the helicopter handling system. The vessel has a full displacement of 4,500 tonnes.


The VLS on the bow deck of Type 054A (Chinese Internet)

The primary surface strike weapon system is the YJ-83 sea-skimming anti-ship cruise missile. Two quadruple launchers are installed at the mid-ship position. The missile uses active radar-homing to deliver a 165kg warhead to a range in excess of 180km.

The principal air defence weapon system is a 32-cell VLS developed by Luoyang Electro-Optics Technology Development Centre (EOTDC). The exact model of the air defence missile is unknown, but some reports have suggested that it may be the 38km-range Russian 9M317 (NATO codename: SA-N-12) Shtil semi-active radar-homing medium-range SAM, or its Chinese copy reportedly designated HongQi-16 (HQ-16).

A single-barrel 76mm gun (possibly Russian AK-176 copy) is installed on the bow deck, in front of the VLS.

The frigate is equipped with two Chinese indigenous Type 730 seven-barrel 30mm CIWS to provide short-range air defence. The Type 730 CIWS has a maximum rate of fire of 4,600~5,800 rounds/min and a maximum range of 3,000m. The gun is controlled by the Chinese-made TR47C fire-control radar and an electro-optic director, both mounted on the roof of the gun turret.

The sensors of the Type 054A Jiangkai-II class are mainly Russian designs, produced either by licensed co-production or reverse-engineering of the systems obtained along with the Project 956 Sovremenny class missile destroyers.

The air search radar is a Fregat-MAE-5 (NATO reporting name: Top Plate) 3D air search radar mounted at the top of the front mast, offering two channels in E-band. The radar can track up to 40 targets simultaneously, and has a maximum range of 120km to aircraft and 50km to sea-skimming missile.


The ship has three indigenous Type 347G I-band radars, two of which are integrated with the Type 730 CIWS to provide fire-control and a standalone radar is installed on top of the bridge behind the large round radome provides fire-control for the 76mm main gun.

There is also a large round radome mounted at the top of the rear mast, possibly housing a MR36 (Type 346?) surface search radar.

The Type 054A is reportedly fitted with a Russian MGK-335 fixed sonar suite, including Bull Horn active and Whale Tongue passive hull-mounted, medium frequency search and attack sonar. Due to limited information available, this claim cannot be confirmed.

The ship is equipped with two 18-tube multiple rocket launchers at the mid-ship position. They are thought to be used to launch decoys/chaffs. The round radome installed on top of the helicopter hanger and few smaller round radomes are believed to house electronic warfare antennas.

Propulsion
The propulsion is a combined diesel and diesel (CODAD) arrangement. The system is based on four SEMT Pielstick (now MAN Diesel SA) 16 PA6V-280 STC diesel engines, one of the most advanced diesel engine designs in Europe. A similar 12 PA6V-280 STC engine with less power is also used by the French La Fayette class frigate. China imported the 16 PA6V-280 STC diesel technology in the late 1990s and is now producing the diesel locally under license at Shaanxi Diesel Factory. Each 16 PA6V-280 engine can produce a sustained power of 4,720kW (6,330hp), giving a total power of 18,880kW (25,320hp).

Dude this frigrate was modified and upgraded further for PN.Plus MILGEM CORVETTES AND U214 SUBs with TOT are also bought.
W 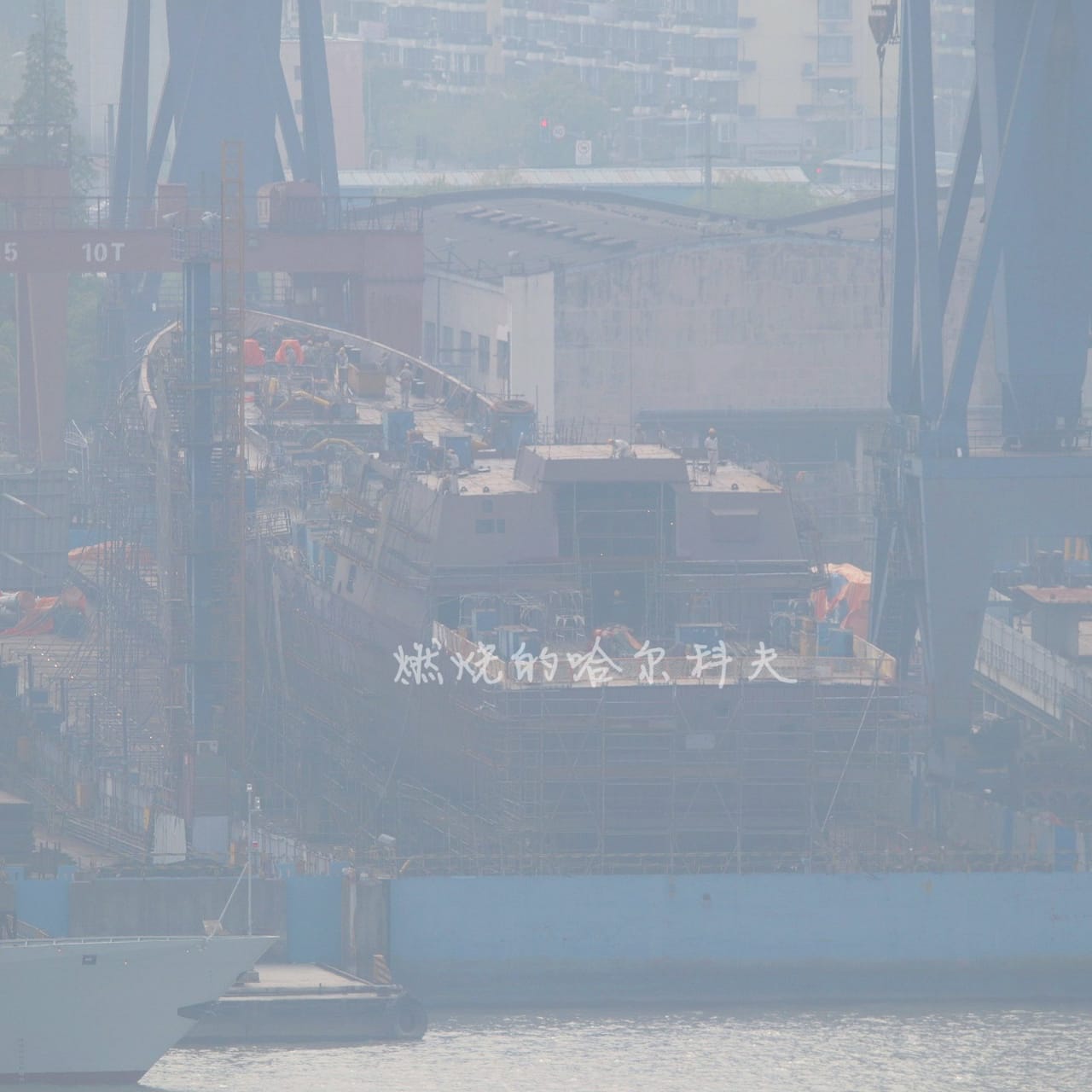 Pakistan Navy’s Type-54AP Frigates, now undergoing superstructure construction in China. The construction of first batch of two ships is scheduled to complete within this year.
W

Pakistan Navy’s Type-54AP Frigates, now undergoing superstructure construction in China. The construction of first batch of two ships is scheduled to complete within this year.
S

lol..obviously it's not...and this is the PLAN FFG-529 - the leading ship of this type/class which is undergoing the intermediate dock repair and first MLU...it's not the HDZH shipyard but the Naval shipyard. I can see her right now through the meeting room windows.

the first PN Type-054 is on the slipway of the river's west bank and the second is in the drydock of the east bank.
Last edited: Jun 3, 2020 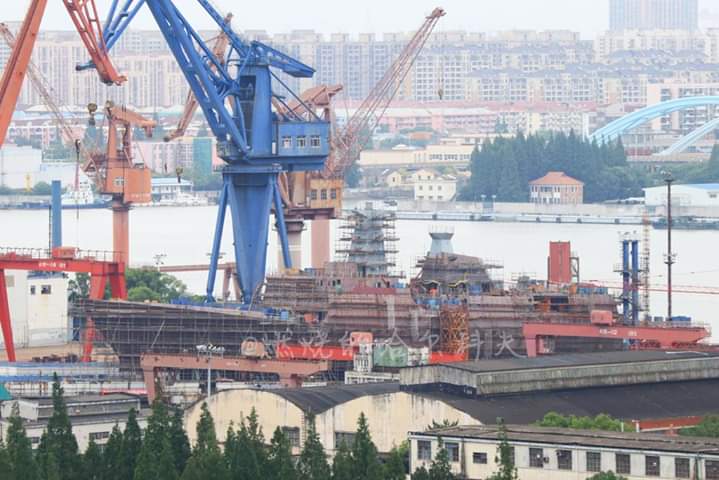 Pakistan Navy #Type54AP frigate to be launched by September of this year. Type 54AP are most advance variant of Type 54 family of frigates and will be a valuable addition in Pakistan Navy.

Use of brahmos will come very high up the escalation ladder.
Before that stage of using direct kinematic response comes, this vessel will be able to fulfill a lot more of objectives than any other ships before in Pak navy, like advanced Asw, better AD(hq 16 family as compared to zulfikar's hq 7), and use advanced anti ship missiles.
The fact that there's 30 of these in Pla navy means these will never be short of spares, refit, modernisation options etc. Having same electronics and suites ensures easier integration into combined operations with pla navy.
W 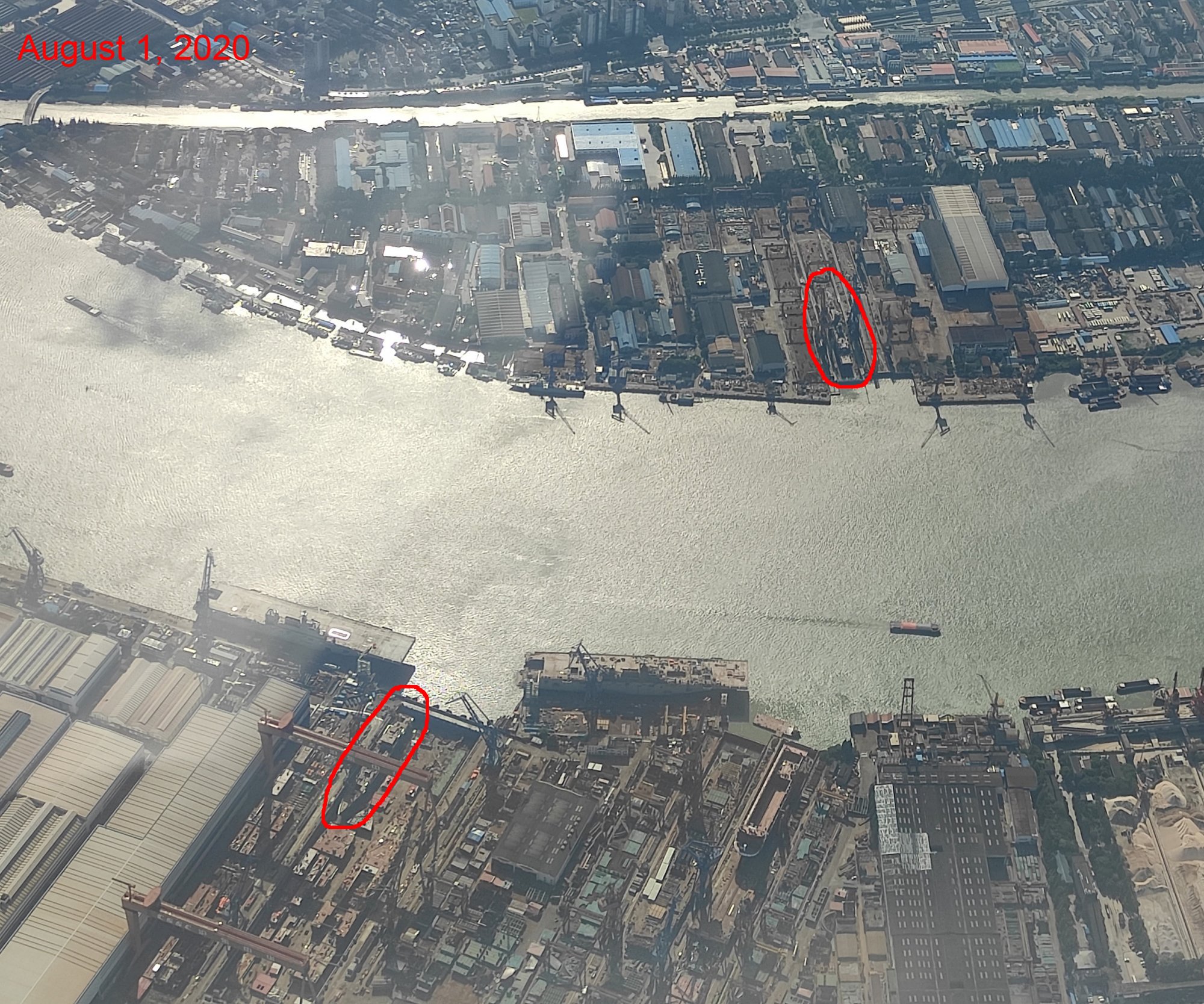 The pair of under construction Type-54AP frigates of Pakistan Navy.
W

The pair of under construction Type-54AP frigates of Pakistan Navy.
W

As per Chinese sources, First Pakistan Navy Type-54AP frigate is expected to launch in China within a week.

WolfPack86 said:
As per Chinese sources, First Pakistan Navy Type-54AP frigate is expected to launch in China within a week.
Click to expand... 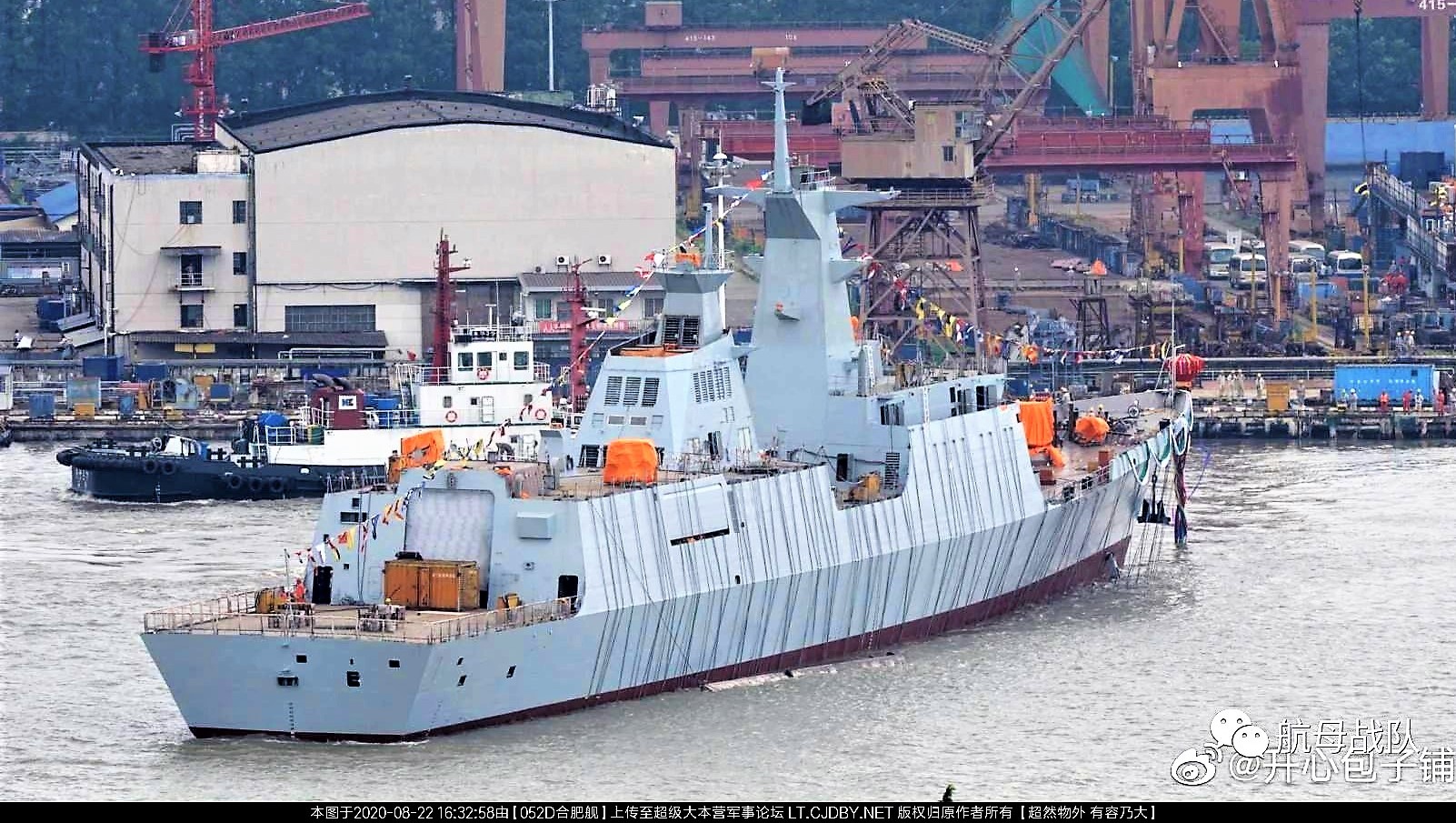 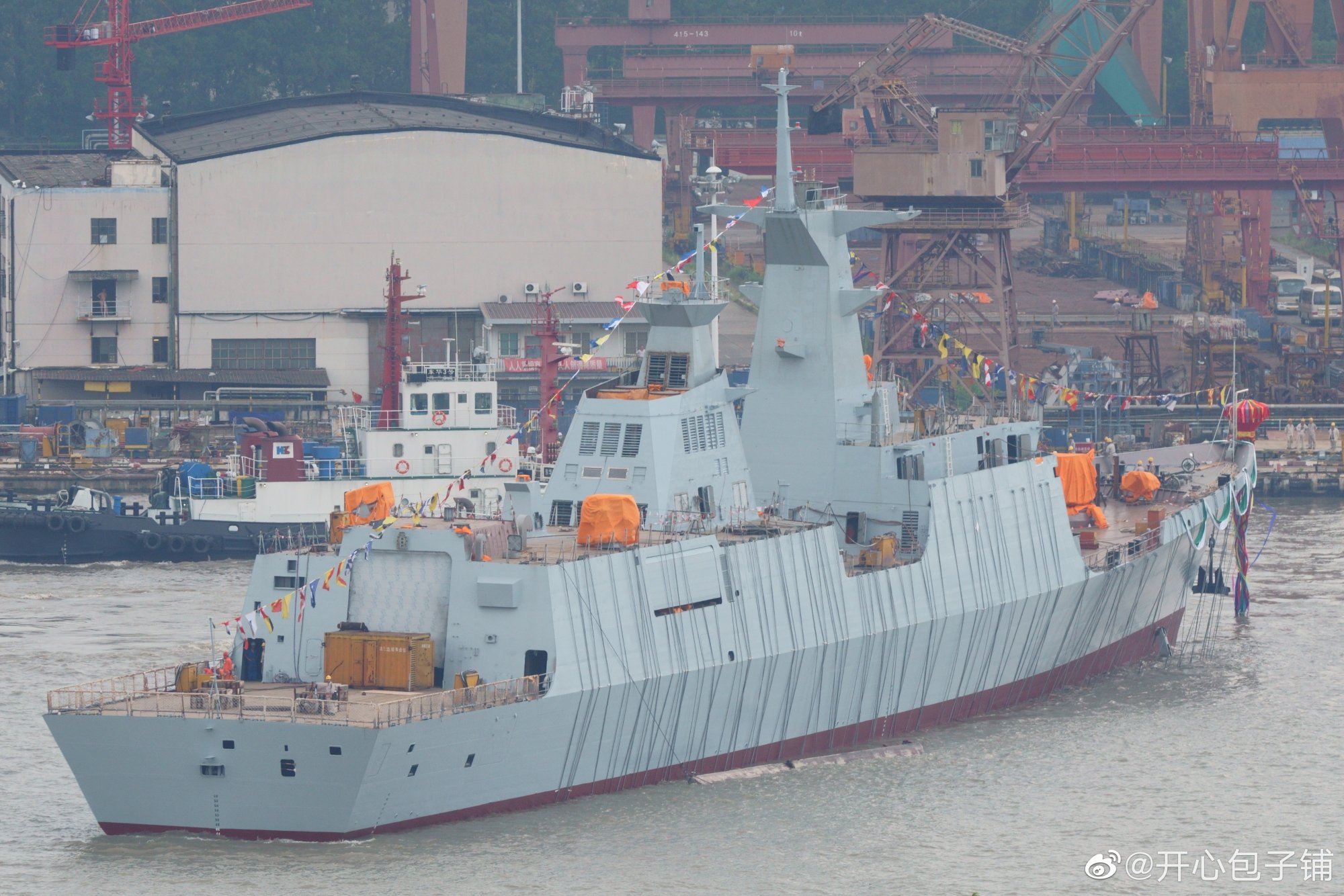 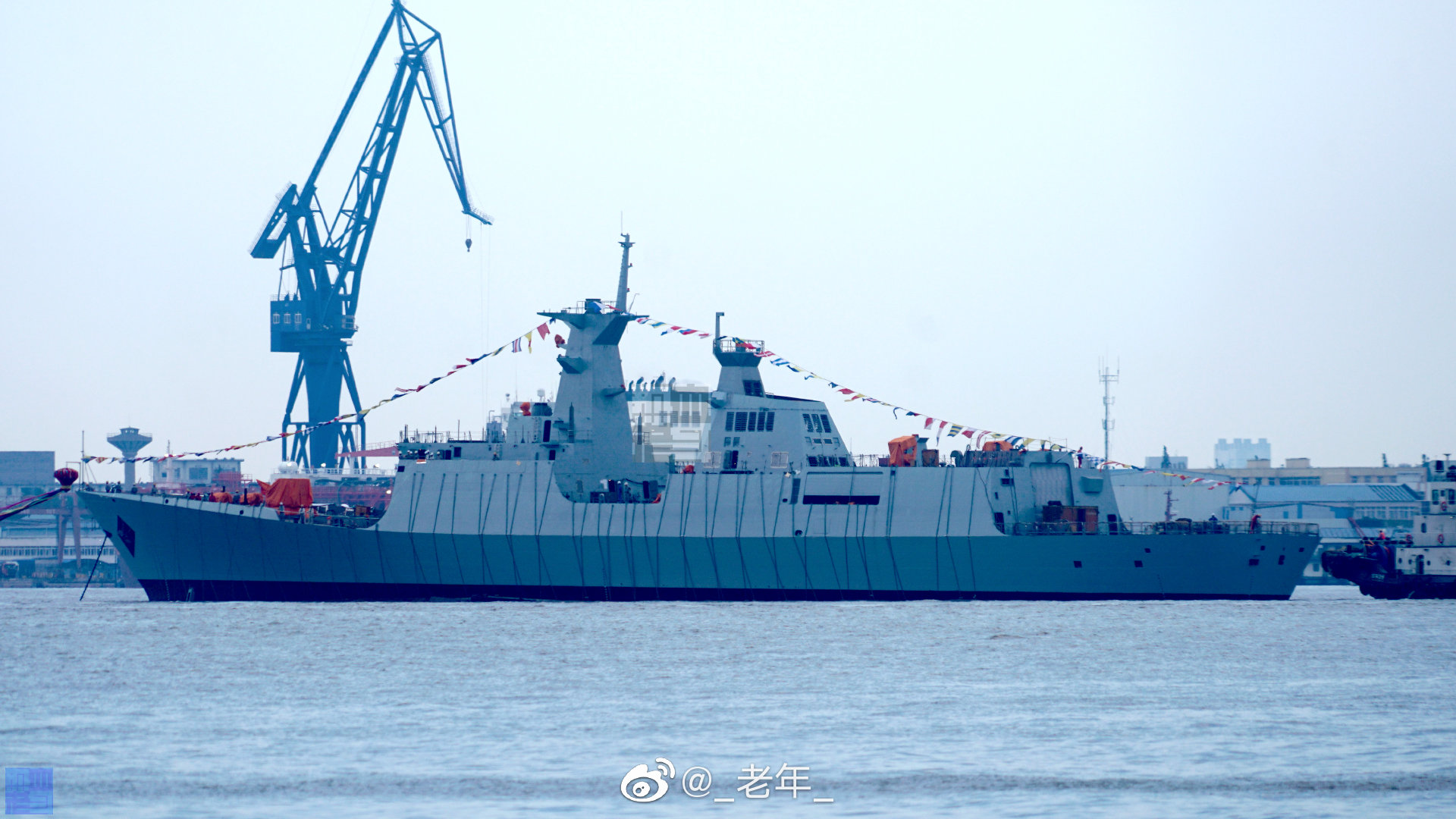 More pics The ship is already mounted with 76mm Rapid fire gun, Anti Submarine rockets and countermeasure launchers. On side note, Type-54AP has promising anti Submarine warfare capabilities which are second to only Type-55 Destroyers as far as Chinese ships are concerned
W

Chinese Shipyard Launches 1st Type 054 A/P Frigate for Pakistan Navy
Pakistan signed a first contract for the delivery two Type 054 A/P frigates in 2017. An additional contract for two more ships was announced in June 2018. The keel laying for the second vessel took place in March this year. Steel cutting for the final two ships took place in November last year. All four units are set to be built in China and delivered to the customer by 2021.


The Type 054A is a multi-role frigate and is recognized as the backbone of the People’s Liberation Army Navy (PLAN) fleet of surface combatants with 30 vessels in commission. They have a length of 134 meters, a beam of 16 meters for a displacement of 4,000 tons. They have a crew complement of 165 sailors and are fitted with:

According to the Pakistan Navy, the Type-054 A/P ships are state of the art frigates equipped with modern surface, subsurface and anti air weapons and sensors. Once constructed, these ships will be the most technologically advanced platforms of Pakistan Navy which will strengthen its capability to meet future challenges and maintain peace, stability & power equilibrium in the Indian Ocean Region.


The Pakistan Navy is currently undertaking an important renewal of its fleet, with the procurement of several modern platforms: In addition to these frigates from China, Pakistan will also commission new corvettes from Turkey and OPV from the Netherlands. It is also modernizing its submarine force.


For the record, the same shipyard located near Shanghai recently built two Type 075 LHDs for the Chinese Navy (PLAN) and a third one is rumored to be on the way. Hudong-Zhonghua is also currently building a Type 071E LPD for Thailand. 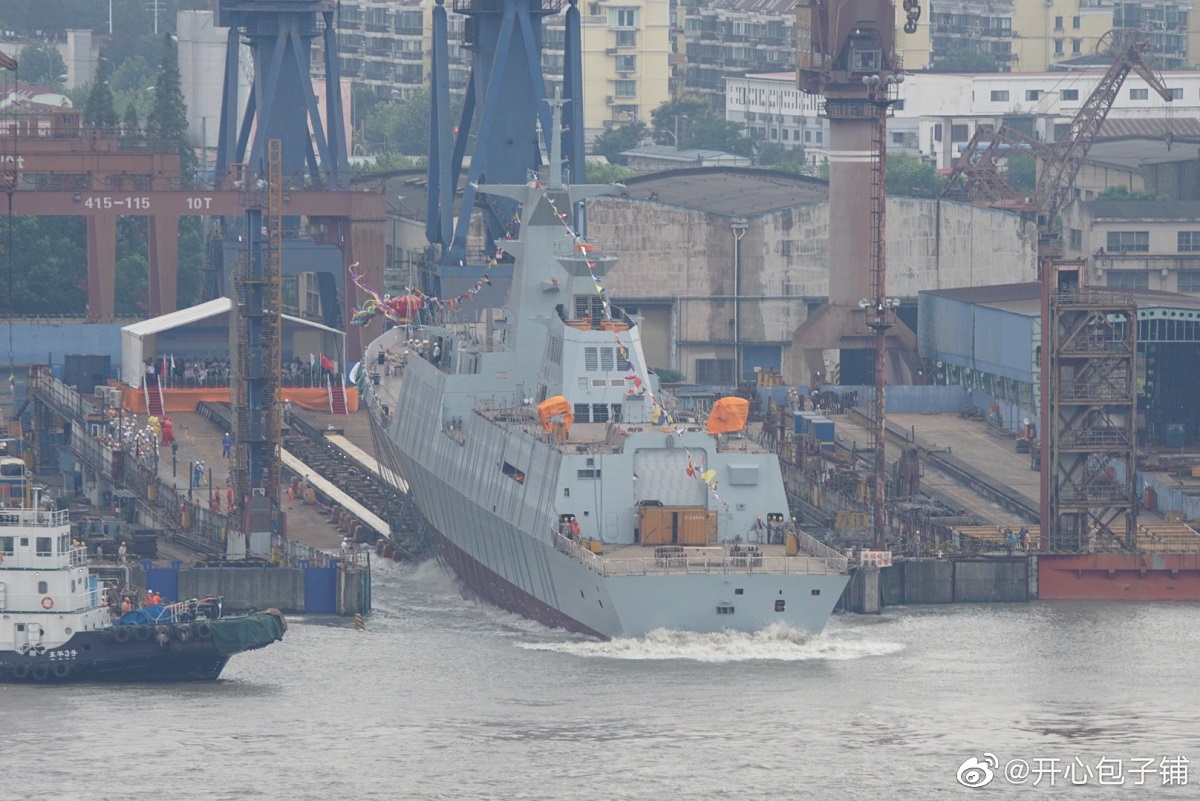 China's Hudong Zhonghua launched the first Type 054 A/P Frigate for Pakistan Navy today. This is the first of four vessels on order by Pakistan.