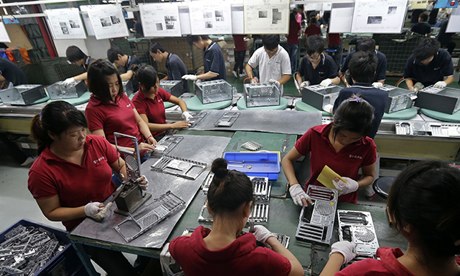 In China there are about 22 million vocational students (aged 15-18) and Foxconn is one of the biggest employers of these as "interns" (Aditya Chakrabortty, 15 October). Foxconn internship programmes range from three months to a year, subject to extension as production requires. Aditya Chakrabortty cites independent research findings, which are strongly supported by Students and Scholars Against Corporate Misbehavior.

Internships at Foxconn are irrelevant to the students' studies and skills training. Under the high-speed production demands of Apple, Sony, Samsung, Nintendo, HP and other clients, Foxconn assigns teenage student interns to process iPhone casings, stick labels on boxes, and assemble game consoles. Interns are exposed to

NO . Sacom found that Foxconn interns were forced to do excessive overtime and to alternate day and night shifts, against the regulations. In this global labour regime, provincial and lower-level government directly intervene to facilitate export-led growth, at the sacrifice of students' educational and human rights.

Good internship is an integral part of the vocational curriculum and is vital to linking theory with practice. In February 2012, Apple CEO Tim Cook failed to reply to students' and scholars' open letter on student labour exploitation. Today, we call on Apple, Sony and other tech giants to stop abusing Chinese student interns in their supplier factories, notably Foxconn. Together with conscientious consumers around the globe, we demand fair labour and decent work for all, including student interns in China, the UK, the US and other countries.
Liang Pui Kwan

Till now we have heard of the Laogais (Prison) where free labour encourages low input in manufacturing that permits China to sell cheap.

Now, there is this innovative way, how people, who are looking for ready money at all costs, are falling prey to exploitation at high costs.

No safety. no insurance and full of health hazards!

The callousness of the Chinese Govt towards is own citizens in being exploited is most extraordinary and disgraceful.

There seems to be no humanity amongst the Chinese authorities who only smell money to feed their greed - their national and cultural genetic fault!
D

It's never very good to be intern anywhere.

Surprising how the Chinese posters, who are so active elsewhere showcasing their 'wonders of the world' are absent from commenting on the seamier side of China.
You must log in or register to reply here.
Similar threads
Did Japanese force Indian soldiers into indentured labour in Rabaul?
Lawyers calling for reform of laojiao system (forced labour without trial)
DAC Approves Indian Air Force Proposal Of Value Rs. 2,236 Cr
India to set up Integrated Rocket Force
Share:
Facebook Twitter Reddit WhatsApp Link