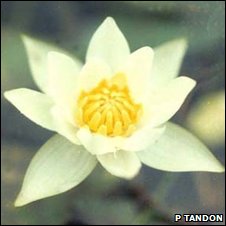 A rare species of lotus is on the verge of disappearing from India, according to scientists.

An expert told BBC News that efforts to save Nymphaea tetragona, found only in a small private pond in India, have not been effective.

Despite a variety of methods of propagation, the plants have failed to grow in sufficiently large numbers.

Leading botanist Pramod Tandon said that it is now as important to save the existing examples as to propagate them.

In India the only surviving examples live on a small piece of private land in the north-eastern state of Meghalaya.

He said that the issues the plants raise stretch beyond the tiny pond where they cling to existence: "The conservation of rare and endangered plants is a global problem and requires a global answer." he said.

Professor Pramod Tandon
Conservation experts have tried to cultivate more of the plants by numerous means, including making cuttings, growing them from seeds and high-tech methods such as micro-propagation from tiny bits of sterile plant matter in a dish.

"Lotus is the national flower of India," said Professor Tandon. "In spite of that, scientists are unable to effectively make this variety survive as micro-propagation and vegetative means have not yielded the desired result."

Culturing the plants from seeds saw a few plants propagate, he explained but: "We were not able to really get these plants in large numbers to be reintroduced into their natural habitats."

Without an immediate and concerted effort, Professor Tandon said he feared this species could disappear from India forever.

As only 20 to 30 plants are left, it is the conservation efforts to protect the area where they are that are of paramount importance.


There are now fewer than 30 specimens of this variety of lotus
"Protection of the existing plants is even more important than multiplying them," said Professor Tandon.

If that could be done successfully, then they could be propagated in their natural habitat in the Smit area of Meghalaya.

Seeds that are available when the plant flowers could aid future micro-propagation efforts.

Professor Tandon disagrees with the view that the government of India has not paid the necessary attention needed to save this critically endangered plant.

He said that a global effort was needed to save many critically endangered plants from extinction as their survival was important not only for preserving natural heritage for future generations but also to maintain continuity in the ecosystem.
N

Various types of plant organs regain life during rainy season and double the attractiveness of nature. Mushrooms are one among them.

Mushrooms vary in size and colours. Some grow on land, trees, rotten wood. These mushrooms sprout and grow during rainy season. Some of them have life span of a day. And some others may live till a month.

In size they may look like Ice- crèam cup, may be in the shape of dosa plate, orchid flowers, chrysanthemum flower, gramophone mike. Some belong to fungus species. Such mushrooms will not be used as food.

Black wood ear is a category used as food in foreign countries. Kenya, China, Japan America and other countries are expert in scientific plantations of tree mushrooms.

Some are of medicinal value. Mushroom of Polypore category sprout on raw trees like areca nut tree too.

Snails prefer these mushrooms as food. We picturise certain species of mushroom collected during this rainy season.